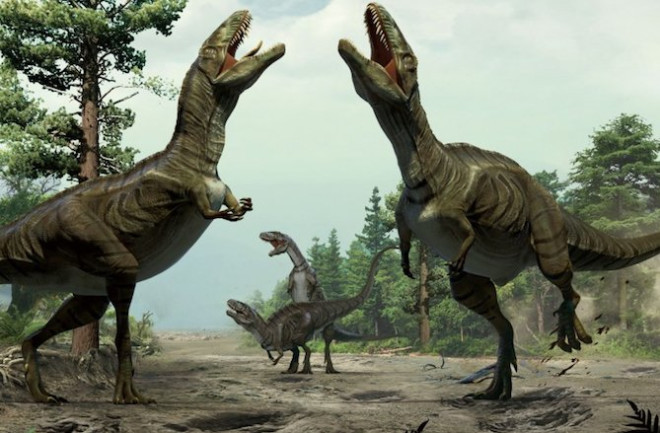 An artist's depiction of what dinosaur mating dances may have looked like. Image credit: Xing Lida and Yujiang Han How did dinosaurs find and attract mates? They went to the prehistoric club. Paleontologists from the University of Colorado Denver discovered a “dinosaur dance floor” in Colorado, where they say ancient theropods scraped deep furrows into the earth as they twisted, turned and kicked in an effort to impress females. The scrape marks were found in the Dakota Sandstone, a layer of sediment laid down around 100 million years ago in the Midwest and West during the Cretaceous period. The researchers believe that some of the marks represent evidence of mating rituals among a species of dinosaur called Acrocanthosaurus, a large, predatory species of bipedal theropod that could grow up to 38 feet long and weigh as much as 6.8 tons.

May I Have This Dance?

As they write in the journal Scientific Reports, the researchers discovered marks at several sites in Colorado, the largest containing around 60 impressions, some of which were over six feet long and almost a foot deep. The marks were characterized by two long furrows in the earth containing evident claw marks with a central hump of earth between them. Theropod footsteps found nearby allowed researchers to determine what type of dinosaur did the digging. These areas, called leks, would have seen many males come together to show off for females in the hopes of attracting a mate. These types of ritualistic behaviors and extravagant displays are common in many bird species today. For theropods, this seems to have come in form of scraping at the ground with their feet, or in human terms, busting a move. The scraping likely signaled the dinosaurs’ strength and nest-building prowess to potential mates.

Martin Lockley (right) and Ken Cart near two of the scrape marks they discovered in Colorado. (Credit: Martin Lockley)

The scientists draw evidence for their claim from similar behavior among ground-dwelling birds today such as certain species of puffins, plovers and parrots. These birds perform scraping rituals in an attempt to showcase their nest-building abilities. Given strong evidence linking dinosaurs to modern-day birds, the researchers say that it is not unlikely that dinosaurs exhibited the same behaviors. The researchers considered, and then rejected, alternate explanations for the scrapes, including that they were the result of dinosaurs digging for food and water, or digging nests. They concluded that the marks were dissimilar to previously discovered marks made by dinosaurs searching for prey. Further, they didn't discover egg fragments or fully formed nests nearby, leading them to hypothesize that these marks were made purely to show off. The findings provide an important link between modern-day bird mating behaviors and those of their dinosaur ancestors. Various sexually dimorphic features such as extravagant crests and horns have been discovered on other dinosaur fossils, but they provided only circumstantial evidence of mating behavior. By ruling out other possibilities, the researchers discovered what may be the first direct evidence of dinosaur breeding rituals. As for what it really looked like when the dinosaurs danced, we may never know. Did they do the Charleston? The Dougie? Maybe they worked in some flamenco?