Dams May Degrade One of China's Remaining Healthy Rivers 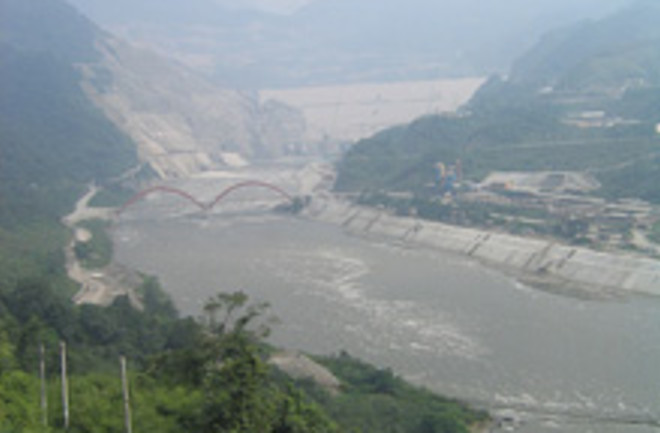 China's plan to build dams along the Mekong River poses the greatest threat to the river's future, according to a United Nations report released yesterday. China is constructing a series of eight dams on the upper half of the Mekong as it passes through high gorges of Yunnan Province, including the recently completed Xiowan Dam, which — at 958 feet (292 meters) high — is the world's tallest. Its storage capacity is equal to all the Southeast Asia reservoirs combined [AP], according to the report. The Mekong, which is known as the Lancang in China, is an important source of water, food, and jobs for residents in the river basin, and runs through China, Myanmar, Laos, Thailand, Cambodia and Vietnam. It provides a habitat for rare species of bird and marine life. If the dams move ahead, said the report, the consequences will include "changes in river flow volume and timing, water quality deterioration and loss of biodiversity" [AP]. But Chinese Foreign Ministry spokesman Ma Zhaoxu defended the proposed plans, saying

China would give equal attention to hydropower development on transnational rivers and ecological protection [Xinhua].

The UN report also looks at the Nu River, for which there are controversial plans to construct 13 dams. Together, the dams would generate more power than the Yangtze River's Three Gorges Dam, but some residents oppose the plans because they do not want to move or say they would not be compensated fairly if they were to do so. The dams also face resistance from countries downstream and from the UN heritage body Unesco, which fears the dams would endanger a world heritage site recognised in 2003 and covering the headwaters of the Nu, Mekong and Yangtze rivers [Times Online]. The Mekong and its tributaries have already been degraded by pollution and climate change, and water levels in the northern section have dropped as a result of earlier dam projects—but none of these problems have reached alarming levels, said the report. On the whole, the river can withstand some additional pressure from agricultural or industrial demand, but the report identified several particular river basins as threatened. "The time to tackle these challenges is now, otherwise the projected growth and development may impact on the basin's ability to meet future water needs" [AP], said the UN's Young-Woo Park. Related Content: 80beats: Did a New Hydropower Dam Trigger China’s Deadly 2008 Earthquake? 80beats: 1/3 of China’s Yellow River Not Even Fit for Industrial Use