Could Pandas Be an Evolutionary Mistake—or Proof of an Intelligent Designer?

They don’t seem to care for sex or proper nutrition, raising questions about whether the fittest have survived. 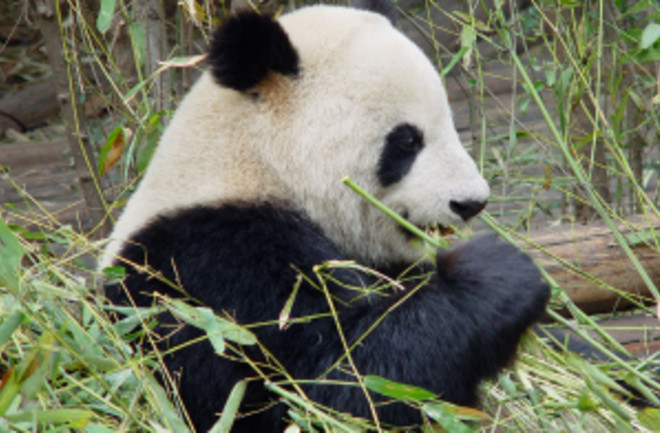 Click here to see the related story, "Are Efforts to Save the Panda a Giant Waste of Money?"

The recent death of Ling-Ling, the only giant panda owned by Japan, sent the world into mourning. Everything about these giant teddy bears—their squat, furry bodies, their sad black eyes, their especially vulnerable babies (often compared to sticks of butter)—makes them ridiculously, scientifically cute. This, along with their dire status as a species, makes them a powerful symbol for the conservation movement as a whole.

But there’s another side of the panda’s tale. Pandas have been ridiculed for their decidedly non-bearlike vegetarian diets, their apparent lack of interest in—and aptitude for—sex, their tendency to spend the majority of their time sitting, eating, scratching (video), and defecating (about 40 times per day)—even for being, shall we say, plump. These rather "unfit" characteristics have made the giant panda a favorite animal of creationists, who argue that the panda’s survival proves the existence of God. How is it, they ask, that such a species could have "evolved" to be so poorly suited for survival and could have lasted these "alleged" tens of thousands of years without a little help from a higher power?

Vegetarians One of the panda's curious adaptations is its remarkably inefficient diet. Like other bears, and like omnivores and carnivores, pandas have short digestive systems, making them ill suited for their preferred diet of fibrous, nutrient-poor bamboo. To obtain sufficient nutrients, pandas must eat almost a fourth of their weight in bamboo every day. Pandas also favor young bamboo sprouts, which have even less nutrition; if they eat only these, they must chomp down almost half of their weight daily.

But according to Megan Owen, a conservation specialist at the San Diego Zoo, there is a possible evolutionary explanation for the panda's seemingly foolish preference for bamboo: lack of competition. When pandas split off from the bear lineage about 3 million years ago, tasty and nutritious cuisine like meat, fruit, and nuts may have been difficult to obtain while bamboo was ubiquitous—a wide-open ecological niche. So there were two choices: Exert some serious effort to get the good stuff, or munch away on a seemingly inexhaustible supply of woody grasses.

The panda accommodated its vegetarianism with a few physical adaptations—enlarged chewing muscles (those adorable jowls), their famous "thumbs," and a slightly modified digestive system (though still far more similar to a carnivore's than to an herbivore's). But the most notable adaptations were behavioral. Pandas must minimize energy expenditure in every aspect of their lives: limiting locomotion and mating periods, having a low surface area-to-volume ratio (i.e., being fat) to conserve heat, and sleeping as much as possible. Energy conservation also explains their endearingly tiny and helpless young: According to Lisa Stevens of the Smithsonian National Zoological Park, it is much more efficient to give birth to very small, undeveloped cubs and raise them externally on milk than to expend energy on their development internally.

Take, for example, Hsing-Hsing and Ling-Ling, the cherished panda couple of the Smithsonian National Zoo, whose relationship had been shaky since ever they were introduced in 1976. Hsing-Hsing failed at his early attempts to inseminate Ling-Ling—not much of a surprise, considering he tried to mate with her ear, wrist, and foot. The zoo then tried and failed at artificial insemination, after which it imported a male, Chia-Chia, from London to mate with Ling-Ling. Instead of mating with Ling-Ling, though, Chia-Chia mauled her. *Ling-Ling and Hsing-Hsing eventually got better at sex, and Ling-Ling gave birth to five cubs between 1983 and 1989—one who was stillborn, four who died within days.

But Hsing-Hsing and Ling-Ling—and fruitless panda cohabitants in zoos everywhere—are not representative of the species, says Matt Durnin, a conservation specialist with the Nature Conservancy’s China Program. "Reproduction is not a limiting factor in the wild—they seem to be doing fine out there. We only see problems in captivity because the way they live there is in such contrast to their natural lives."

In the wild, male pandas compete with each other for females, who then select their mates—behaviors inextricably linked to the natural motivation for mating. "If you pull a man and a woman off the street and stick them in a room together," Durnin says, "you can't just expect them to start making babies." As for the male panda's embarrassing lack of sex know-how, **Durnin says it may be an unfortunate consequence of breeders' desire to maximize cub production. In the wild, panda cubs usually stay with their mothers for about two years; breeding centers in China remove cubs at about six months to a year to make sure the mother ovulates during the next breeding season. Young pandas are thus denied an important period of social interaction and the opportunity to observe appropriate mating behavior.

The purported physical problems—genitalia size and mating period—are greatly dramatized. It's true that females are in heat for only three days or so per year, but that mating period is only slightly shorter than most other bears'. And as for the mismatched genitalia, Owen says it's not a big deal. "They get the job done,"she says. Big penises may seem more effective, but many large mammals—particularly other bears—have relatively small ones. "It's definitely a struggle to get correct positioning, but if they're motivated, they do what they need to do."

Reproduction in captivity has greatly improved since the difficult days of Ling-Ling and Hsing-Hsing. Intra-couple fighting can be avoided by putting males and females together only when the female is receptive—a state that panda specialists can now accurately determine by the female's behavior. And cubs now have a survival rate close to 100 percent, Owen says, "possibly due to the undisturbed environment that zoos are trying to create." Some zoos are also experimenting wit hleaving the cubs with their mothers for longer and sheltering them from gawking tourists, but the effects have not yet been analyzed.

So it's true: Pandas did not evolve… in zoos. They evolved to find their own food and seek out their mates in dense bamboo forests after being raised by their real mothers, not by zookeepers. The panda's weaknesses in today's world—from its failure to reproduce in captivity to its yawn-inspiring lifestyle—is a product of its natural history, not a malicious joke of an intelligent designer.

Humanity's experience with pandas has shown us that saving the species is not going to be easy—or cheap. In fact, eminent conservationist Chris Packham has called panda conservation "possibly one of the grossest wastes of conservation money in the last half century.” He said he "would eat the last panda" if it meant he could transfer all the money thrown at pandas to other, "more sensible" species (like insects,rodents, and plants) or to entire habitats.

With conservation resources limited, and with global warming sure to accelerate the extinction of species, should we rethink our priorities? Check back next week, when DISCOVER investigates whether we should continue to save the cuddly-wuddliest animals at the expense of the creepy-crawly ones that may be far more important ecologically.

Ling-Ling and Hsing-Hsing eventually got better at sex, and Ling-Ling gave birth to five cubs between 1983 and 1989—all of whom died within days, one after being squashed by its exhausted mom.

**Correction, August 5, 2008. Originally stated: Durnin says it may be an unfortunate consequence of zoos' desire to maximize cub production. In the wild, panda cubs usually stay with their mothers for about two years; zoos remove cubs at about six months to a year to make sure the mother ovulates during the next breeding season.