Continental Drift: A Revolutionary Theory That Was Once Considered Pseudoscience

In the early 20th century, one man withstood a lifetime of ridicule to uphold the revolutionary idea that land masses move. 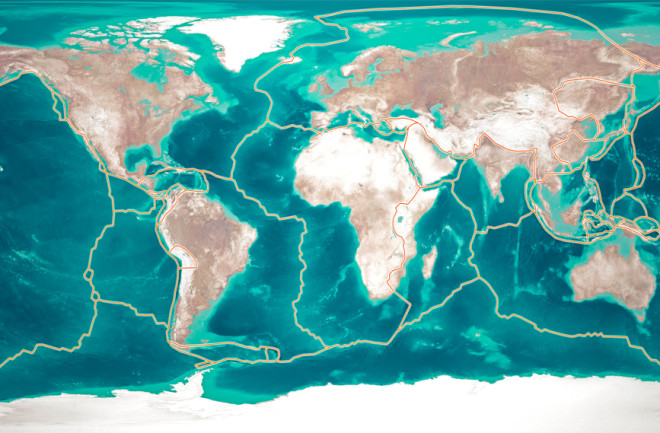 Scientific opinion shifts in the same way continents do — very, very slowly. Sometimes the change is so long coming that the author of a new theory doesn’t live to see his work vindicated. Sometimes he freezes to death, on an expedition in an Arctic wasteland, decades before his peers finally recognize him as a visionary.

Such was the fate of Alfred Wegener (1880-1930), a German scientist who lived and died with the unwavering conviction that the ground we stand upon is not as solid as it seems. He was right, of course. Geologists today accept the basics of his theory of continental drift — albeit in the more refined context of plate tectonics — as a fact of nature: Our planet’s configuration of land and ocean was different millions of years ago, and will be different millions of years from now.

The experts of Wegener’s own time, however, dismissed the theory as pseudoscience and diagnosed him with “moving crust disease and wandering pole plague.” They did eventually join him on the right side of history, after a half-century's worth of efforts to discredit his work and disparage his character. But as he waited for the rest of the world to embrace his ideas, it may well have felt like standing on the Florida coast and watching the horizon for the approach of Africa.

The man who toppled the edifice of geological knowledge wasn’t even a geologist. A trained astronomer, yes; a daring and renowned explorer, yes; an authority on Earth sciences, no. Wegener was a meteorologist, better known for holding the world record for the longest hot-air balloon flight rather than rock-related research.

Undoubtedly, his lack of credentials put him at odds with establishment academics from the start, but their scorn came also from a firm belief that the continents had always stood in more or less the same position. Many people had made the glaring observation that the continents fit together like puzzle pieces (most clearly along the coasts of South America and Africa), but the dogma of continental permanence ran so deep that Wegener was the first to seriously consider its logical conclusion: At some distant time, they must have been joined.

When he first noticed this jigsaw match on a world atlas, around the Christmas of 1910, he too found it “improbable,” he wrote. But the next fall he learned that many fossils on either side of the Atlantic, in West Africa and Brazil, were nearly identical. He also learned that to account for this, his contemporaries suggested plants and animals had crossed ancient land bridges which had since sunk into the oceans. Wegener began to think his hypothesis might not be improbable, after all.

Over the next few months, as he built his case, he had no qualms about ditching the status quo. A month before he publicly presented his theory, in December 1912, he wrote to his mentor and future father-in-law, Wladimir Koppen: If the evidence favored continental drift, he asked, “why should we hesitate to toss the old views overboard? Why should this idea be held back for ten or even thirty years?”

In hindsight, it’s clear these are the words of an idealist. Dispassionate objectivity is the stated goal of science, true — but the reaction to Wegener’s proposal is a stark reminder that flesh-and-blood scientists don’t always check their emotions at the laboratory door.

The Puzzle Comes Together

After publishing his first papers on the subject — which were mostly ignored — in 1912, Wegener dropped his geological investigation for a while. He joined an expedition to Greenland, returned and married Else Koppen, had a first child, Hilde, and was called to active duty in Belgium at the start of World War I.

Later, as he recovered from battle wounds, he formulated his ideas in a book, The Origin of Continents and Oceans, published in 1915. Its premise was that the Earth’s crust consisted of two layers, with the upper layer drifting constantly along the lower, like the icebergs he’d seen floating across the Arctic seas. More than 250 million years ago, he wrote, the continents of today formed a single, vast landmass which he named Pangaea (Ancient Greek for “all-Earth”). Surrounding this supercontinent was a superocean, Panthalassa (“all-sea”).

The evidence to support this shocking argument came — unusually, in that era of strict specialization — from everywhere: geology, geophysics, biology, paleontology, paleoclimatology and beyond. This oft-denounced multidisciplinary strategy was crucial to Wegener’s discovery. “It is only by combing the information furnished by all the Earth sciences,” he wrote, “that we can hope to determine 'truth' here.”

Wegener found some of the strongest support for continental drift — which he actually called continental displacement — in the striking similarity between many rock formations now separated by oceans. “It is just as if we were to refit the torn pieces of a newspaper by matching their edges and then check whether the lines of print run smoothly across,” he wrote. On the biological side, he was impressed by the resemblance not only of marsupials but also of the parasites that infect them, in both Australia and South America.

He knew he had mustered only indirect evidence, Lisa Yount writes in the biography, Alfred Wegener: Creator of the Continental Drift Theory. Still, he “believed that the quantity and variety of his evidence were so great that they amounted to proof.”

The geologists of the world emphatically disagreed. After a couple of overlooked editions and an English translation, Wegener’s book sparked an intellectual firestorm in the 1920s. The Austrian paleoclimatologist Fritz Kerner von Marilaun spoke of Wegener's “delirious ravings,” while the British geologist Philip Lake said at a meeting of the Royal Geographical Society that Wegener was “not seeking truth; he is advocating a cause and is blind to every fact that tells against it.”

The Americans — who had been at war with Wegener’s homeland just a few years earlier — were especially hostile. A decent summary of their response came from William Berryman Scott, president of the American Philosophical Society, who bluntly declared the theory “utter, damned rot.”

During a 1926 conference in New York City to discuss continental drift, the leading experts attacked its every line of evidence. Many of their critiques were valid — especially regarding the unconvincing suggestion that the mechanism for drift might be either centrifugal force from the Earth’s rotation or tidal pull on the planet’s crust — but, Yount writes, “they should not have been enough to make Earth scientists discard Wegener’s theory entirely.”

Read more: The Next Pangea: What Earth’s Future Supercontinent Will Look Like

Nevertheless, they did, and their ridicule scared away most would-be pursuers of continental drift. It’s plain to see what was at stake for these men — the theory undermined the foundation of a science they had dedicated their lives to. “If we are to believe Wegener’s hypothesis,” wrote Rollin Chamberlin, a prominent geologist at the University of Chicago, “we must forget everything which has been learned in the last 70 years and start all over again.”

Even in the controversy of those early days, though, the first traces of acceptance were visible. “We are discussing this hypothesis because we would like him to be right,” said George William Lamplugh at the Royal Geographical Society meeting, noting that it would solve many long-standing problems for geology. “The underlying idea may yet bear better fruit.”

But that fruit needed proponents bold enough to cultivate it, and those were scarce. As British geologist Richard Dixon Oldham put it at the time, “it was more than any man who valued his reputation for scientific sanity ought to venture to advocate anything like this theory.”

Maybe Wegener wasn’t worried about his reputation. Maybe he was confident posterity would restore it. Either way, he kept searching, answering the barrage of criticism and censure with ever more refined proof. But by 1929, when he published the fourth and final edition of his book, it still suffered from a fatal flaw: Compelling as his wild blend of evidence was, it couldn’t explain what caused the Earth’s crust to move.

The next year, Wegener embarked on his last adventure: a weather research expedition on Greenland’s remote, barren ice sheet. He spent the summer and fall hauling supplies by dogsled to the research station 250 miles inland, but as winter drew near, the locals he had hired deserted him. With a band reduced to only two men, he made a final delivery of just enough food and fuel to keep the station’s crew alive until spring. On Nov. 1, 1930, he left for the coast. The temperature had dropped below -60 degrees Fahrenheit.

Along the way he died, probably from a heart attack. Months later, when a search party found his body, one member reported his face appeared “relaxed, peaceful, almost smiling.” Wegener was honored as a great meteorologist and Arctic explorer — not as the architect of a great geological theory.

On that front, it would take three more decades for the world to catch up. As late as 1958, a book rejecting continental drift included a foreword by Albert Einstein. Then, suddenly, in one of science’s great “I told you so” moments, the discoveries of seafloor spreading and the constant rumbling and grinding of colossal tectonic plates finally brought continental drift into the mainstream.

Wegener didn’t get everything right. It’s not the continents that drift, per se, but rather the slabs of crust, or lithosphere, to which they are attached. And the force driving this drift isn’t centrifugal or tidal, but convective — the Earth’s interior heat keeps these slabs in motion. But this theory of plate tectonics, one of the great revolutions in modern science, owes its existence to Wegener’s own creative theory and his willingness to imagine beyond the bounds of accepted wisdom. Continental drift, writes British geologist Anthony Hallam, “stands not merely as a forerunner of the concept that now prevails but as its true ancestor.”