Danish researchers have isolated a compound that may provide an alternative to opiates. 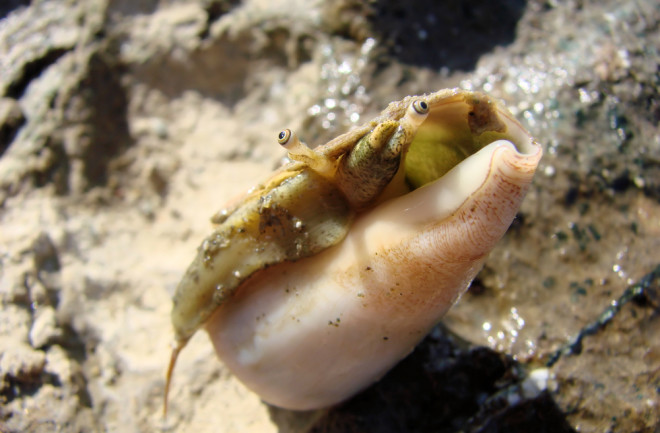 A few miles off the coast of Sogod, a town on the east coast of the Philippine island Cebu, a small, colorful fish nestles into a crevice for the night. Half-buried in sand and pebbles, a venomous cone snail, Conus rolani, extends its proboscis and stings the fish on its belly.

The venom of C. rolani is a prime example of evolution at work. One sting from the snail is enough to incapacitate a small fish. And, because the fish is already unresponsive when consumed, C. rolani does not have to risk an injurious struggle with its prey. Over millions of years, the snail has developed a potent biological weapon. But to humans, it could be lifesaving.

In 2004, the U.S. Food and Drug Administration approved a synthetic version of cone snail toxin, named Ziconotide to treat severe pain. For patients who do not feel the effects of morphine, a single dose of Ziconotide injected directly into their spinal cord can provide relief. A decade later, a group of researchers identified an insulin in cone snail venom that provided insight to diabetes medicine developments.

In March, scientists zeroed in on a new cone snail toxin at the University of Copenhagen. The compound, isolated from C. rolani venom, mimics a human hormone with a diverse set of biological functions. Though its biomedical potential is still untapped, the chemical has shown great promise as an analgesic in animal trials. If all goes well, it may one day provide an alternative to opiates for managing chronic pain.

When Bea Ramiro, a PhD student and the principal investigator in the University of Copenhagen study, began the project, she was working on a hunch. While the snail that had given rise to Ziconotide, Conus magus, was easy to collect in shallow water, Ramiro had her sights set on a lineage of cone snails that preferred deeper, darker depths. To this day, little is known about their behavior.

"We can get so much information about things in outer space, but it’s really hard to observe things that live in deep water," Ramiro says.

Even so, the existing literature piqued Ramiro’s interest. Snails like C. magus hunt using a method that scientists dub "tase and tether." Essentially, the snail extends a long, thin barb-tipped appendage, which stings their prey and induces "rapid chemical electrocution." Then it reels the fish in and swallows it whole.

In contrast, the lineage of deep-water snails that include C. rolani are thought to "ambush and assess" their prey. Their venom acts slowly, incapacitating the fish over a longer period while the snail waits patiently. The researchers hypothesize that the slow nature of the venom might indicate that its components could be effective as a sedative.

In the end, the scientists singled out C. rolani from its other deep-water relatives out of convenience. Ramiro, collected snails for the project with a team of local fishermen out of Sogod. After a couple of days dragging up nets, Ramiro had far more specimens of C. rolani than any other species.

Researchers started the investigation by extracting venom from the C. rolani specimens and injected it into mice. The effects were striking. Over an hour or so, the rodents lost their balance, became sluggish and then unresponsive.

"Initially I thought the mice had just died," Ramiro says. "But they were still breathing. They were just completely unresponsive."

And after a few hours of complete sedation, the mice seemed to recover. At least in mice, the venom was a powerful anesthetic.

Through a process called reversed-phase chromatography, the researchers identified a small fraction of the chemicals in C. rolani venom that may be responsible for these effects in mice. Then, they followed a trail of genetic and chemical clues to identify the exacted compound in question. In the end, they isolated a peptide that they dubbed Consomatin Ro1.

A Cure for Pain?

The mysterious Consomatin Ro1 is similar to somatostatin, a hormone that plays a central role in how we feel pain. But while somatostatin is highly unstable when it is taken out of the human body, the snail-derived compound is much more durable.

"Venom compounds have to be very stable, otherwise they would never reach their target destination in another organism," Helena Safavi says, assistant professor at the University of Copenhagan. "And they also have to do the job of really knocking out the other animal. Often they’re more potent than the compounds we make in our own bodies."

Consomatin Ro1 may also be more useful to pain relief than the hormone it mimics. While somatostatin regulates many biological functions through the manipulation of g-protein coupled receptors, the venom analog targets specific receptors thought to be associated with pain sensing.

But, Safavi and Ramiro are still not satisfied. They hope to identify a similar compound with stronger effects.

"It’s highly stable, but could be more potent," Safavi says. "We’re looking for other compounds in other cone snails that might be more potent."

Through countless generations of predator-prey interactions, cone snails have solved a complex biomedical problem. The synthetic version of Consomatin Ro1 won’t be available to consumers for many years, if at all. But its discovery raises another question. Are the answers to the most pressing problems in medicine written in the genetic code of the living organisms that live alongside us on earth? Most likely, some of them are.

This will likely not be the last we hear from Safavi’s research group about cone snail venom. Of the many compounds in the venom of over 150 extant Conus species, researchers have only investigated a few.

"There are so many more. Every cone snail has a unique venom profile with hundreds of compounds," Ramiro says. "As soon as you stop with one thing something else sparks your interest."