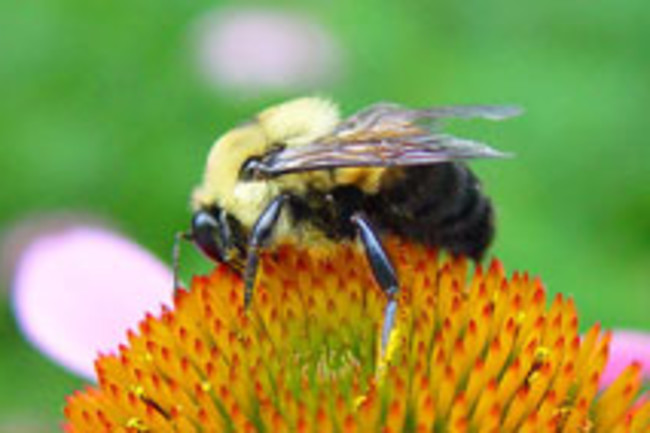 The commercial bumblebees that are brought to greenhouses to pollinate some vegetables occasionally wander off the job, and researchers say the wayward bees that slip out into the fields are infecting their wild cousins with a nasty parasite. A new study says that parasite

may be to blame for the recent decline in wild populations in North America and elsewhere [New Scientist].

Greenhouse growers bring in the bumblebees for tomatoes and other crops that need what’s called “buzz pollination,” a strong vibration that shakes loose the pollen. Honeybees don’t give the buzz, but bumblebees do [Science News].

In the study, published in the journal PLoS ONE, researchers observed several greenhouses in Canada, and saw bumblebees flying out of the greenhouses through vents. When commercial bees landed on flowers in the nearby fields, researchers say they left behind parasites that wild bees later picked up. They found that half of the wild bees living near the greenhouses were infected with the parasite, while those that lived farther away were disease-free. The parasite of concern is Crithidia bombi, which is very common in commercial hives.

The parasite robs bees of their ability to distinguish between flowers that contain nectar and those that don't, [study coauthor Michael] Otterstatter said. For commercial bees fed by their owners, that skill isn't important. For wild bees, its absence is deadly. "Infected bees make an incredible number of mistakes," Otterstatter said. "They visit empty flowers again and again" as they slowly starve to death, he said [Bloomberg].

Although the C. bombi parasite doesn't infect honeybees, whose plight has been in the news as scientists struggle to understand "colony collapse disorder," researchers say it's possible that a similar disease relationship exists between commerical and wild honeybees. The news isn't all grim for bumblebees: In Scotland, a group called the Bumblebee Conservation Trust has covered an empty field in wildflowers to create the world's first bumblebee sanctuary.

The project has already been an outstanding success, with hundreds of bumblebees buzzing from flower to flower. And to the delight of conservationists, one of the rarest species in the country – the blaeberry bumblebee – has set up home in the 20-acre meadow [The Scotsman].