Gold and glory were out there for the taking ... or were they? Scraps of truth may have helped fuel the legend of the fabled city. 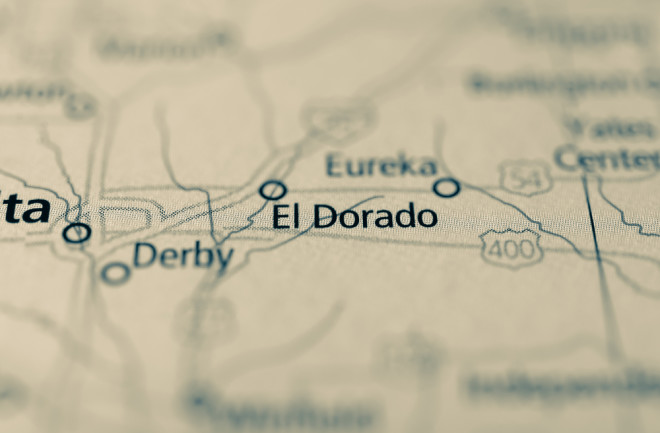 Today, El Dorado is the name of an actual city in Kansas. (Credit: Tudoran Andrei/Shutterstock)

Deep in the Colombian rainforest, shrouded by a canopy of trees, the city of El Dorado awaited discovery. Or, perhaps, it was in the southwestern U.S. Or was it a city at all?

During the 16th century, legends of a golden city spread through Europe like wildfire, especially after the discovery of the Aztec and Incan empires. This rumor continued to grow throughout the 16th and 17th centuries, ensnaring the imaginations of explorers like Sir Walter Raleigh and Francisco Vázquez de Coronado, who went searching for the mythical city, often with destructive results.

The story behind the legend of El Dorado is complicated, brutal and political, yet still remains a popular tale — and continues to capture the attention of researchers today.

From roughly A.D. 600 to 1600, the Muisca people inhabited what is now modern-day Colombia. Concentrated around what would become the city of Bogotá, this advanced civilization likely inspired the legend of El Dorado, according to Marc Aronson, an associate professor of library science at Rutgers University and author of Sir Walter Raleigh and the Quest for El Dorado.

The story may stem from a coronation ceremony the Muisca people would hold for new leaders. The subject of honor would be covered in gold dust and placed on a raft, Aronson says, then rowed to the middle of Lake Guatavita where they leapt into the waters, washing the gold from their body. Gold and jewels were also thrown into the lake as offerings to the gods.

The Muisca people were well known for their skilled craft, especially when it came to carving gold. Gold and its lustrous shine was valuable because of its association with the sun god, Zue — one of their most important gods. During this time, gold was not used as currency, but rather for art: Artists carved tunjos (or flat figurines), masks, jewelry and other specialty items.

Much of the golden art created by the Muisca people was used in burial ceremonies and has since been found in tombs. One such piece depicts a ceremonial raft with several figures, one of whom is taller than the rest and adorned with a ceremonial headdress. This ancient artwork is one of the most solid pieces of evidence that the ceremony that sparked the El Dorado legend actually took place.

After discovering gold and other riches in both the Aztec and Inca empires and hearing rumors of El Dorado, or "the gilded one," the Spanish conquistadors swept into the Muiscan territory, searching for the famed gold-covered king. Despite finding nothing of the legendary leader, the Spanish maintained control of the area for its natural resources.

This artifact that potentially depicts the roots of the El Dorado legend is on display at the Gold Museum in Bogotá, Colombia. (Credit: worldrecorders/Shutterstock)

As the quest to discover El Dorado grew, so did the legend itself. What was once a king laden with gold had grown to be an entire city where vast troves of gold were hidden. While evidence of the Muisca ceremony has been found, the legend “became conflated with the idea that there was the lost gold of the Incas,” Aronson says. “The idea that some Incas may have escaped and brought a huge horde of gold somewhere else.”

The European thirst for gold and riches was so strong, especially as Spain and England went to war, that expeditions were sent into the uncharted lands of the Americas during the mid- to late-16th century to find the fabled city. However, the quest for El Dorado would prove to be most disastrous.

Some explorers, like Raleigh, thought the gold was hidden in the cities of either Manoa or Omagua, which were rumored to be in modern day Venezuela or Brazil. After falling out of favor with Queen Elizabeth, Raleigh attempted to find the Lost City of El Dorado and bring its riches back to England in 1595. Though he managed to capture the Spanish stronghold at San José de Oruña, in Trinidad, he was unsuccessful in his larger venture.

A few years later, after the death of the queen and the coronation of King James I, Raleigh was accused of treason against the king. To regain his honor, Raleigh attempted to find El Dorado again — but this time on the condition that he would not get into any conflicts with Spain. However, against Raleigh’s orders, while he was sick, his men attacked the Spanish outpost Santo Tomé de Guayana in what is now Venezuela. Raleigh returned to England empty-handed and was beheaded.

Other Europeans like Coronado, who was the governor of New Galicia (Northern Mexico) in 1538, heard rumors of the "Seven Cities of Gold" from the four survivors of the Narváez Expedition and thought these cities lay to the north of Mexico.

Coronado’s expedition took him across most of what is now the southwestern U.S. While his expedition did encounter the Grand Canyon and other famous geological features, any villages they came across contained no gold. Most of the villages he came across were home of the Zuni people — skilled craftsmen, artists and farmers. Coronado was cruel to the Indigenous people he encountered, killing them outright or destroying their food sources so they would starve, and forcing his way into their cities. However, some of the Indigenous people who met his expedition confirmed that the Seven Cities of Gold existed, encouraging the group to keep moving north to find it.

It wasn’t until Coronado had reached modern-day Kansas that he realized that the story of the Seven Cities of Gold was a ploy to get him and his men out of the Native territory; the cities never really existed to begin with. The expedition had nearly robbed him of all of his money and he was removed from his governorship — but thousands of Native Americans living in those areas suffered much greater losses from these expeditions, especially the Zuni.

Despite the riches of the Aztecs and the Incas, there was never anything tangible that tied them to El Dorado. Explorers in search of the city were able to map new areas of the Amazon rainforest and the southwestern U.S., and new foods like the potato were found and brought to Europe. But the truth behind El Dorado, according to Aronson, is that it was a legend that stemmed from something real — the Muisca ceremony.

Beyond that, there was the fact that three kingdoms — the Muisca, the Incas and the Aztecs — had all been found to have wealth in gold and resources, which helped keep the rumors alive. There is also the possibility that Indigenous groups and Europeans used the rumor of El Dorado to keep interested parties out of certain areas. For these reasons, at the time, El Dorado didn’t seem like such an outlandish idea.

However, the more explorers failed to find it, over time, El Dorado became seen less as a place and more as a symbol; or “the next big thing,” says Aronson, adding that this symbol reminds him of Bill Gates and the Elon Musks of the world today. “There is this sense that if you just reinvent cars or reinvent taxi service or reinvent how we pay for things, how we write and communicate, you will become the richest person on Earth,” Aronson says. “In our time, the El Dorado is the next Silicon Valley disruption.”