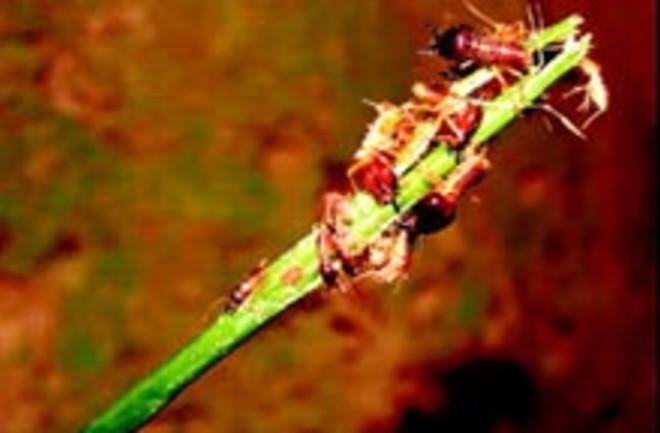 A particularly clever band of chimpanzees living in one area of the Congo basin have found a better way to fish for food in termite mounds.

Zoologists have long known that chimps eager for a tasty termite snack use a short stick, which is thrust into the termites' nest. The insects bite on the intruding probe and are then extracted and slurped down [AFP].

But chimps living in an area called the Goualougo Triangle in the Republic of Congo have been observed crafting more complex tools that increase their haul of insect morsels. Instead of using a simple pointed stick, lead researcher Crickette Sanz says these chimps modify their tools by making a special brush tip.

To make their rods, the chimps first picked some stems from the Marantaceae plant and plucked off the leaves. "They then pulled the herb stems through their teeth, which were partially closed, to make the brush and they also attended to the brush by sometimes pulling apart the fibres to make them better at gathering the termites," Dr Sanz added [BBC News].

Researchers recorded the behavior, which they describe in a new article in the journal Biology Letters, by setting up remote cameras near termite nests. After observing the chimps' trick

Interestingly, the behavior has only been observed in chimps living in the Goualougo Triangle; chimps elsewhere fish for termites with less efficient pointy sticks. The apparent absence of the more advanced tool use

in populations in eastern and western Africa suggests that it is not an innate skill found in all chimpanzees. Instead it seems that the Goualougo primates are learning the crafting techniques from other chimps [BBC News].

Sanz's team wants to continue studying the chimps of the Goualougo Triangle to see if they have other clever tricks, but she says the group is threatened by development and disease.

"Just as we are learning about these exciting new complex tool behaviours, the chimps that are showing us these behaviours are under danger from logging, poaching and Ebola," she explained [BBC News].

Related Content: 80beats: Even Monkeys Know Which Rock Will Break the Toughest Nut 80beats: Sponge-Wielding Dolphins Teach Their Daughters How to Use Tools DISCOVER: The “Monkey Whisperer” Learns the Secrets of Primate Economics DISCOVER: Gorillas Use Tools TooImage: Biology Letters