The cat's remarkable braking and pivoting abilities may be as important for hunting success as its rocket-like acceleration is. 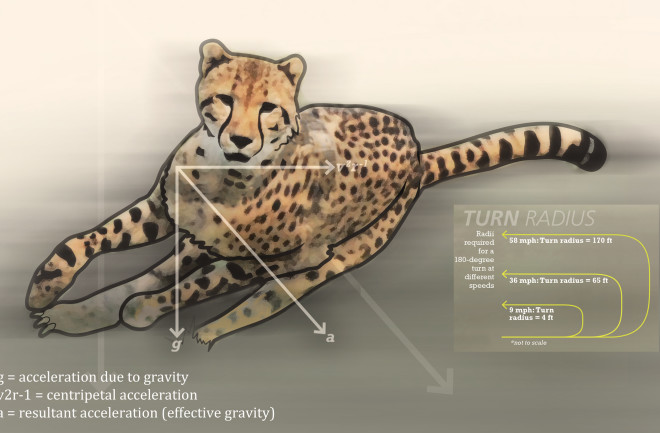 Humans have kept cheetahs in captivity for 5,000 years and recorded the cats sprinting faster than 60 mph. Yet we’re only now grasping the true athleticism of the world’s fastest sprinter in its natural habitat, thanks to the work of a former competitive runner who wanted to understand “the enigma of the cheetah.”

Alan Wilson, a biomechanicist at London’s Royal Veterinary College, started out studying the locomotion of racehorses, greyhounds and jackrabbits at top speed. “We started running cheetahs in a zoo setting and didn’t really get them to go very fast,” he says. “Surely,” Wilson recalls thinking, “a wild cheetah goes even faster.”

So his team started developing equipment to measure how cheetahs move in their natural habitat. The work brought them to the dry grassland of Botswana’s Okavango Delta region, where researchers camped out in tents. Leopards, elephants and lions were frequent visitors.

Out on the delta, Wilson’s team produced the first close tracking of cheetahs hunting in the wild — and revelations that a remarkable ability to brake sharply and pivot may be as important for hunting success as the cat’s rocket-like acceleration. Here’s how the feline speedster catches its zigzagging prey.

The cheetah fires its heavily muscled legs forward and back to accelerate by up to 6.7 mph in a single stride. Rigid paws and blunt claws act like cleats.

Lightning-quick muscle contractions make a galloping cheetah like an engine in low gear. Paws strike one at a time, and a flexible spine extends reach. But a wild cheetah needn’t go all-out for dinner. On average, the Botswana quintet topped out hunting runs at a moderate 33 mph and typically maintained top speed for only one to two seconds.

A cheetah on the hunt may execute six or seven turns in a successful run spanning several hundred feet. The cat’s tail, up to 3 feet long, helps to initiate turns.

Midgallop, a cheetah hooks one of its two sharp, retractable claws into the prey’s rump to yank the animal off balance. It suffocates the animal by biting the neck.

Alan Wilson’s Structure and Motion Laboratory developed a collar to track cheetahs’ hunting behavior and movement patterns in the wild at the level of individual footfalls. The team recruited Wilson’s dog — a greyhound-whippet-terrier cross — to test the gear on an English beach, cross-checking data reports against paw prints in the sand, before deploying collars in the field.

Gyroscopes, magnetometers, and accelerometers measure roll, pitch, and yaw, as well as posture, balance and acceleration.