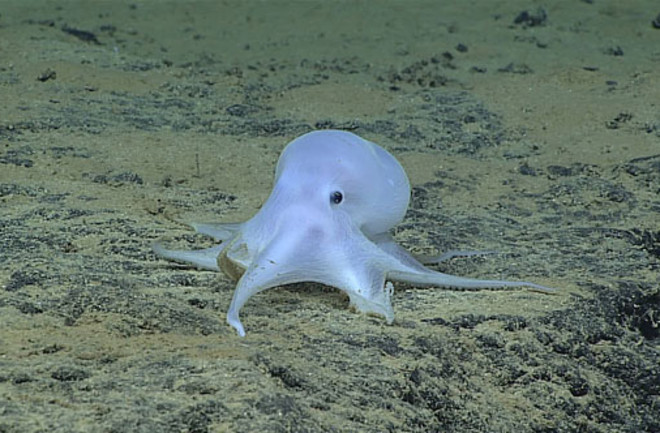 Casper the octopod. (Credit: Image courtesy of NOAA Office of Ocean Exploration and Research, Hohonu Moana 2016) Less than a year after being discovered, Casper the octopod could be in mortal danger. Researchers say the ghostly, eight-armed sea creature is likely threatened by deep-sea mining operations that excavate metallic protrusions it relies on to reproduce. Found in March by an NOAA deep-sea expedition off the coast of Hawaii, Casper is believed to be a new, fin-less octopod species, and the deepest ever discovered, at around 2.5 miles beneath the ocean's surface. With button eyes, stubby arms and a near-translucent body, the deep-sea dweller won over the internet and spurred interest in the Okeanos Explorer mission that found it. Casper, named after the friendly ghost, is now the star of a scientific paper, published Monday in Current Biology, although it has not been formally described yet. Instead, the researchers discuss the breeding habits of the octopod, which lays its eggs right in the path of valuable undersea minerals.

A different octopod of the same species. (Credit: Jason 2 ROV team) Casper, and the rest of its species, lays eggs on the stalks of dead sponges on the seafloor. The brittle stems provide a solid place for the eggs to rest while they incubate, a process the researchers say could take over a year. The dead sponges, in turn, are attached to lumps of manganese and other metals found scattered across the sea floor. The metallic nodules take millions of years to form as metals slowly accrete around a small core. The resulting nuggets are lucrative targets for deep-sea mining operations because they contain a mix of rare earth metals commonly used for high-tech devices like smartphones. Such nodules are found all across the seafloor, but the deep basins near Hawaii seem to be a hot spot for them. While there has been some interest in retrieving these minerals in the past, such efforts were stymied by the engineering challenge of scooping tiny lumps of metal off of the seafloor miles beneath the ocean. But as demand for rare earth metals rises, mining companies may soon find the seafloor a lucrative option.

A "Casper" octopod brooding a clutch of eggs. They are each attached individually to the glassy stem of a sea sponge. (Credit: AWI-OFOS Launcher team) A study in the 1980s investigating the significance of the metallic lumps to the seafloor ecosystem found that significant disruptions lasted for years after some of the nodules were removed. The octopods seem to like hanging out in areas where the nodules are present, which makes sense, because that seems to be their nursery. Take them away, and Casper really could become a ghost.