Wolf pups retrieved balls for humans in a new study — but questions remain as to why this behavior exists. 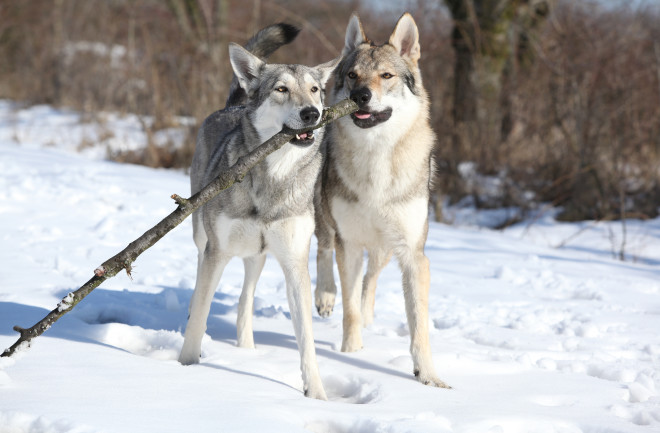 It might seem like your new puppy is too scatterbrained to play fetch, but their instinct for the game might lie deep in their canine past. A new study published today in iScience found that wolf pups will pick up and retrieve balls thrown by humans with whom they are unfamiliar — indicating a willingness to play with people, a trait that could be older than domestic dogs themselves.

“Similarities [between dogs and wolves] can tell us something about which traits our forefathers likely selected upon to create the dog at least 15,000 years ago,” wrote Christina Hansen Wheat, a study co-author and zoologist at Stockholm University, in an email.

One of those traits could have been a wolf's inclination to respond to human instruction, “which will likely surprise dog owners as much as it surprised me,” she said.

As domestication gave dogs stunted snouts, black coats of fur and an almost endless array of physical variety, wolflike behaviors changed, too. Canine researchers generally assume that one of those adjustments was the willingness to respond to human cues. Hansen Wheat thought so, too, until she and her colleagues noticed something strange while they were working on a larger study on wolf pup behavior.

The research team set out to test several behaviors of 13 wolf pups — all eight weeks old and raised by humans. One of the assessments involved measuring how well the pups could retrieve a ball. A human the pups hadn’t met yet joined them in an enclosure and rolled a ball onto the floor. Patting their thighs and offering words of encouragement, the researcher would wait and see if the pup would pick up the ball and bring it back to them.

Most of the pointy-eared pups barely looked at the ball the three times it was offered. But two — Lemmy and Elvis — picked it up and eventually returned it to their new acquaintance twice. And another pup, Sting, gave it back all three times.

“While it looks like the fetching we see in dogs, it is hard to know the exact motivation for the wolves to do so,” Hansen Wheat said.

Distilling their exact motivation for the game, whether it be play or something else, would be difficult. However, Hansen Wheat said the behavior is distinct from catching prey or other wolf instincts because the puppy had to choose whether or not to listen to the human.

Pick Me, Pick Me

The wolf pups were raised by hand, which might influence their willingness to cooperate with people. But, generally, wolf pups tend to be timid around strangers, Hansen Wheat said. That’s why the researchers were so surprised when the pups engaged so well with someone new.

For Hansen Wheat, seeing this fetchlike behavior means that researchers like herself need to spend more time figuring out what skills wolves passed on to dogs, and which ones are exclusive to their species. As unexpected as the pups’ retrieval was, some of their aptitude makes sense. If some wolves were already interested in engaging with humans, our ancestors may have been more drawn to those canines and made them candidates for domestication.

“We connect with our dogs when we interact with them,” Hansen Wheat said. “Wolf puppies showing human-directed behavior could therefore have had a selective advantage in early stages of dog domestication.”