There's plenty of animals that can communicate. But true linguistic mastery in the animal kingdom is harder to pin down. 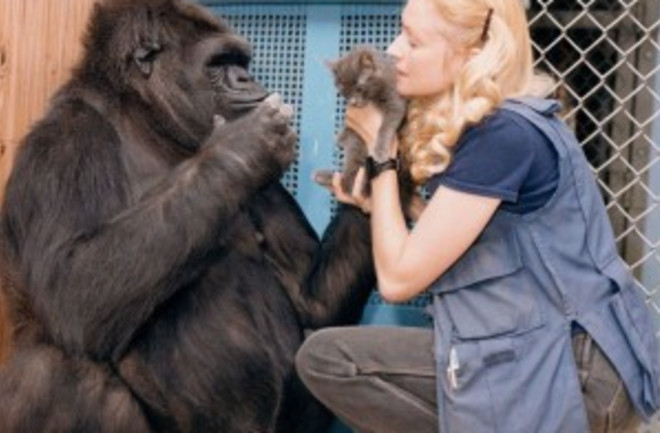 Few things in life spark the imagination quite like the idea of being able to converse with organisms of a different species. (Just look at Hugh Lofting, who penned the much-loved Doctor Dolittle books based on that very premise.) We want to know if our pets think we are treating them well. We want to know if zoo animals are content with their captivity, or if they’d rather go back into the wild. We want to ask the predator why they hunt their prey, and if they feel at all sorry for doing so.

Unfortunately, anyone who has spent any time with an animal will tell you they don’t talk back. Sure, it may seem as though your puppy understands you when you order them to sit and they listen to you. However, that kind of understanding is merely Pavlovian; rather than grasping the true meaning behind your words, the puppy knows only that performing a specific action will result in their receiving a treat.

Still, every now and again, an extraordinary creature comes around that can make us question whether humans and animals are indeed incapable of communicating. Koko, a western lowland gorilla born in San Francisco Zoo in 1971, comes to mind. Over the course of her life, Koko was taught to use 1,000 different kinds of signs. These were based on human sign language but modified for the unique morphology of a gorilla.

Whether Koko used her 1,000 signs intelligently is difficult to say. The animal never used proper syntax, and her ability to make herself understood by others was comparable to that of a human child. At the same time, several video recordings show Koko in conversation with her caretakers, demonstrating familiarity with abstract concepts like the difference between “real” and “fake,” or the death of her pet kitten, which she had named “All Ball.”

These achievements have led director of the Chimpanzee and Human Communication Institute Mary Lee Jensvold to exclaim that Koko used “language the same way people do.” At the same time, Koko’s use of language has been questioned by many experts. Graham Turner, a professor of translation and interpreting studies at Heriot Watt University, concluded that sign language is too complex for other great apes to truly master.

“Although the apes can use two or three signs in a sequence,” Turner told the BBC in an interview published on the occasion of Koko’s death in 2018, “close inspection of filmed data has repeatedly shown trainers prompting them, and then questionably interpreting separate responses as signed sentences.” Turner’s view is compelling, especially when considering that Koko’s primary caretakers often acted as gatekeepers to the scientific community.

Other details about Koko’s life likewise indicate that her use of language was, if not misleading, at least prompted by humans. In 2005, three female employees at the Gorilla Foundation filed a lawsuit claiming Koko’s caregivers - under the pretext of interpreting the animal’s signs - repeatedly asked them to flash their breasts. At the time, animal experts were quick to attest that gorillas are not known to fixate on nipples.

The ambiguity surrounding Koko does not prove animals are incapable of acquiring language. Instead, Koko’s story serves as a reminder that we should be careful about how we define “language” when working with animals. Time and again, people studying animal behavior make the mistake of projecting themselves onto their subjects, using standards that, though they might seem universal to us, are in fact distinctly human.

If we define language simply as a medium through which to share information, then there are countless creatures that have demonstrated some level of proficiency. In 2013, researchers showed individual dolphins have “signature whistles” that are unique to them and function much like names do for us. Similarly, humpback whales and blue whales perform mating songs to attract females.

The ability to communicate specific information is not restricted to mammals but actually extends to the realm of insects as well. Bees use what beekeepers call a “waggle dance” to share the location of and distance to a food source with other bees. Other insect species like ants talk via pheromones, which they leave behind to help each other find their way to their respective colonies.

The more complex the social network an animal lives in, the more advanced that animal’s ability to communicate information tends to be. However, as one journalist points out in The Economist, “there is an important distinction between communication and language,” just as there is an important distinction between a human commenting on the state of the economy and an ant involuntarily leaving a trail of chemicals as it trods along the forest floor.

Language — human language — is defined by its arbitrariness. Whereas body language, another form of communication seen across the animal kingdom, is by definition linked to the information being conveyed, there is no inherent connection between the word “banana” and the object which this word is linked to. Thus, while body language can be expressed instinctually, verbal language has to be acquired.

True mastery of verbal language has not been observed in animals, though researchers have kept their eyes peeled for the next best thing: vocal production learning, or the practice of copying a sound from the environment and modifying it to fulfill social or biological needs. Vocal production learning has been observed in a small number of animals, including songbirds, hummingbirds, parrots, bats, dolphins and elephants.

“Among these animals,” Stephanie King and Vincent Janik wrote in a 2013 study, “only parrots and dolphins” have been found capable of using arbitrary, learned signals to label objects in experimental studies.” As a result, parrots and dolphins are not just at the forefront of studies that seek to understand the inner workings of labeling and naming within animal communities, but the process of acquiring language in general, as well.

Numerous science-fiction films — like 2016's Arrival — have explored the hypothetical difficulty of communicating with aliens, and they provide a suitable analogy for talking to animals. Regardless of varying levels of intelligence, it is highly unlikely we will ever be able to come to a true understanding with our animal brethren. This is because the way in which a particular species communicates isn’t universal, but predicated on evolution and further modified by conspecific social interaction.