In the forests of Germany live large numbers of blackcaps, a small species of songbird. They all look very similar, but they actually belong to two genetically distinct groups that are becoming more disparate with time. For the moment, the best way to tell them apart is to wait for winter. As the cold sets in, one group of blackcaps flies southwest to Spain, while a smaller group heads northwest towards Britain. 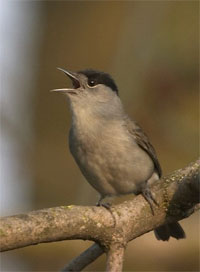 If the prospect of spending winter in Britain rather than Spain seems odd to you, you're not alone. Indeed, blackcaps were hardly ever ventured across these shores before the 1950s. But since then, the birds have taken advantage of the glut of food left out on bird tables by animal-loving Brits. These banquets, along with the luxury of not flying over the Alps, have made Britain an increasingly popular holiday destination for wintering blackcaps. And that has set them down the path towards becoming two separate species.

The mystery of Britain's winter blackcaps was solved in a classic series of experiments by Peter Berthold (awesome beard) in 1992. Berthold found that chicks from the two populations (those that fly to Britain and those that fly to Spain) would always fly in the same direction as their parents even if they were raised in identical environments. This strongly suggested that their travel plans were genetically set, and Berthold proved that by breeding birds from the two groups. Amazingly, their offspring migrated in a west-northwest direction, about halfway between the routes of their parents.

Berthold went on to show that the blackcaps' inherited itineraries were the result of a handful of genes at most. And these initial differences have become magnified over time. When spring returns, the blackcaps fly home, they select mates and they form bonds that will last until the next year. But those returning from Britain have less distance to cover so they reach Germany first and they pair up with each other. When the stragglers from Spain get there, they only have each other to mate with.

Even though all of these birds spend most of the year in each others' company, they are actually two populations separated by barriers of time that prevent genes from flowing from one group to another. Gregor Rolshausen from the University of Freiburg has found that their genetic separation is already well underway.

He has found the Spanish migrants are genetically more distinct from the British ones than they are to individuals from more distant parts of Germany, some 800km away. These differences have arisen over just 30 generations and they're now sizeable enough that with a bit of DNA sequencing, individuals can be assigned to the right group with an accuracy of 85%.

It's highly unlikely that the British migrants arose because of an influx of genes from other blackcap populations. For a start, no European blackcaps had ever been found to migrate in a northwesterly direction before 1960.

Instead, Rolshausen thinks that the crucial factor was human altruism - by giving food to wintering birds, we also gave an advantage to any individuals with mutations that sent them in an unorthodox direction. Previously such birds would have simply died, but with humans around, they (and the genes they carried) flourished.

Their bodies have even changed. The British migrants have rounder wings. In general, European blackcaps with shorter migration routes tend to have rounder wings - they're more manoeuvrable but less suited to long distances. They also have narrower and longer beaks, for they are generalists that mostly eat seeds and fat from garden feeders. Birds that arrive in Spain eat fruit and those with broader bills can eat larger fruit.

Their colours are also slightly different. British migrants have browner backs and beaks, while the Spanish migrants are greyer. It's not clear why, but Rolshausen thinks that these changing hues could provide the birds with a way of recognising, and sticking to, their closer relatives.

This is one of the few studies to show that human activities - the provision of food to wintering birds - are powerful enough to set up reproductive barriers among animals that live in the same place. It also shows that these first few steps of speciation can happen with extraordinary pace, in just 50 years or so. As Rolshausen notes, the blackcaps are testament to the speed with which evolution can operate.

No one can say whether the blackcaps will actually split into two different species. All the conditions are right, but our activities may change the playing field once again, so that the birds experience entirely new sets of evolutionary pressures.