A recent study in Brazil's Atlantic Forest suggests mammals flock to a particular tree to self-medicate, revealing a sort of 'universal pharmacy' in the ecosystem. 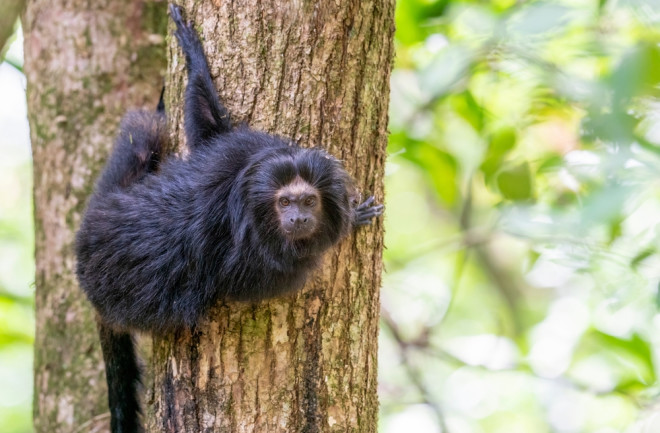 Recent camera-trap footage from Brazil’s Atlantic Forest is probing our understanding of self-medication practices in animals. Researchers, in this case, found evidence that suggests a host of tropical mammals regularly visit particular trees known to play a role in traditional medicine. The work was published in the journal BioTropica.

Olivier Kaisin, a Ph.D. student at the University of Liège and at São Paulo State University, and his team uncovered the unusual behavior while conducting research on black tamarins. Notably, camera footage captured members of this monkey species – not known for their sociability – visiting cabreúvas (Myroxylon peruiferum) trees in groups.

“We saw the tamarin group rubbing on this tree and we first thought they were scent marking, marking territory, because they often do that,” Kaisin says. A closer look revealed something else.

This species of tree is commonly used in traditional medicine for a variety of ailments in humans. Cabreúvas produce a resin that is believed to help treat scabies, dysentery and urinary infections. Meanwhile its bark is thought to function as an antibiotic, kill off Aedes aegypti mosquito larvae and work as an anti-fungal substance. It’s also used as a perfume because of its peculiar and pungent scent, reminiscent of honey and freshly cut pine, says Kaisin.

The team set up more camera traps to investigate what the black tamarins were doing. That revealed the behavior wasn’t limited to this one animal.

A Host of Mammals

This marks the first observation of such behavior in peccaries, tamanduas, tayras and neotropical fruit bats, the study authors note. Tamanduas, which are a species of anteater, used their elongated claws to tear open the tree before performing a good old full-body rub, says Kaisin. Meanwhile, peccaries dabbed their snouts and rubbed up on one another top to tail, appearing to share the tree’s balsam. “They put it on their snout, and then they put it on their hind legs. But they also did this between individuals, which was really surprising to witness,” he adds.

Kaisin and his colleagues believe that some of this behavior with the tree is an example of zoopharmacognosy – or self-medication in animals. But this hypothesis is yet to be confirmed. “We make assumptions based on current literature, but other studies would be necessary to really understand exactly why,” he says. It’s possible that the Atlantic Forest mammals are using the tree’s balsam to repel parasites or protect against diseases spread by mosquitoes or ticks.

“[T]he behaviours they're seeing and describing are certainly consistent with self-medication,” says Dan Blumstein, a professor in Ecology at UCLA, who was not involved in the study. “The novel thing I thought about this was using camera traps and acquiring all this hidden information, things that are occurring out there that people aren't seeing, and then suggesting that this is consistent with self-medication.”

Álvaro Mezcua is a Ph.D. student at Complutense University of Madrid who has studied the history of zoopharmacognosy. He was not involved in the Atlantic Forest study and says that various things could motivate the behavior in these animals toward the tree. “Sometimes it is just a matter of taste, something they enjoy eating, smelling, or rubbing their fur for social or territorial reasons,” he says.

Given that these trees are thought to possess a whole host of benefits, he believes self-medication is a strong possibility: “[I]t is more than likely that the various mammal species know perfectly how and when to use them in order to benefit from their prophylactic and/or therapeutic properties.”

In general, the field of zoopharmacognosy remains largely understudied, says Mezcua, despite its importance and the possible benefits it can provide for wildlife and humans alike. “There are so many applications for this in important fields like veterinary medicine, animal welfare, pharmacology, zootechnics, human medicine, animal and habitat conservation, and many more,” he says.

Based on their findings, Kaisin and his colleagues believe the cabreúvas trees could act as a “universal pharmacy” for the animals of the Atlantic Forest. “M. peruiferum may represent a valuable and disputed resource for mammal species, which may help sustain populations by promoting their health and increasing fitness,” the study states. If this hypothesis holds true, this finding could have important ramifications for the conservation of these species and the Atlantic Forest.

“With further studies, if this behaviour is finally confirmed and cabreúvas trees are proved to be a natural pharmacology for a wide range of species, conservation actions will follow and many areas could consequently become protected,” says Mezcua.

Whether these animals are dependent on the tree and how important it may be for their fitness are just some of the questions that still need to be answered, according to Kaisin. His own research project was cut short due to the COVID-19 pandemic. But other investigations are in the pipeline to confirm whether this behavior is indeed an act of self-medication.

Though questions remain about why these animals are flocking to these trees, Kaisin is thrilled that we still have much to learn about tropical species. “I think it’s interesting in 2022 to still discover some incredible things about species, especially about mammals because they are usually more studied,” he says.