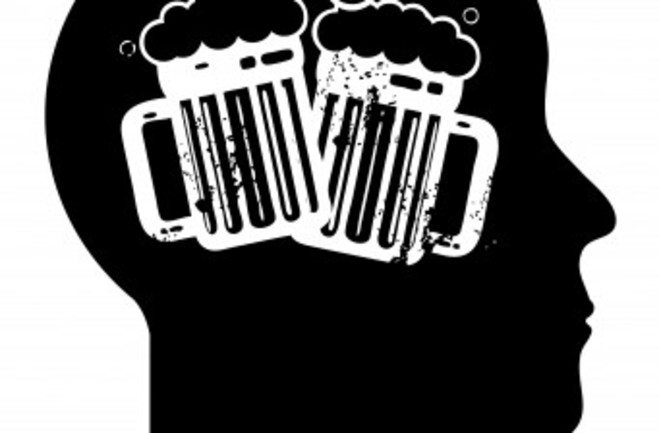 Beer gets into our heads, even before the alcohol has time to kick in.Image credit: 123RF Stock Photo I remember quite vividly the first time I tried beer — I almost spit it out. Bitter, bubbly and generally bad, I didn't get why everyone seemed to be so enamored with it. Yet I, like so many people in the world, continued to drink it. Have you ever wondered why we, as a species, consume alcoholic beverages even though they taste terrible at first? A new study suggests that despite the bitter taste, the chemicals in beer trigger the brain's reward system. This pleasurable effect might just explain why we're so willing to keep drinking past the first sip — until intoxication takes over, and we'll drink just about anything. But more importantly, this new research, published today in the journal Neuropsychopharmacology, may explain why some people can drink casually while others slip into alcoholism.  Addictions occur when the brain betrays the body, causing feelings of pleasure from activities that are unhealthy. Scientists have long known that the release of dopamine, the neurotransmitter that stimulates the brain's reward system, is strongly associated with addictive behaviors. The pleasure kick stimulated by alcohol, drugs or risky behaviors tells our bodies to repeat the behavior, starting a dangerous cycle that can be tough to break. Understanding exactly what triggers the release of dopamine in the brain is key to understanding and preventing addictions and relapses. For alcoholics, previous research has found that even the sight or smell of beer is rewarding to the brain, pushing them to drink. David Kareken and his colleagues wanted to know whether the same was true of the taste. Forty-nine men whose relationship to alcohol varied from almost non-existant to perhaps-too-intimate were given tiny tastes of their favorite beer while scientists watched how their brains reacted using a positron emission tomography (PET) scanner. They also asked the men to report their desire to drink, and whether they had any family history of alcoholism.

PET scan from the paper of brains after beer, revealing dopamine activity in the right ventral striatum. They found that the very first sip of beer is enough to begin the neurotransmitter cascade. Within minutes, dopamine was released by the ventrial striatum, and the men reported increased cravings for more. The same effect was not seen when gatorade or water was substituted for alcohol. The men only received 15 milliliters of beer on their tongue over the course of 15 minutes through an automated sprayer, so there was no chance that changes in the brain were due to intoxication. Instead, flavor cues alone — before the alcohol could enter the body — caused the release of dopamine and induced the desire to drink, even in men with no alcoholic past. The subjects that did had a family history of alcoholism, however, had notably higher levels of dopamine release after tasting beer than those who didn't. Meanwhile, the heavy drinkers who didn't have any family history had only moderate dopamine release, suggesting that heritable traits are more important in influencing the brain's reaction to beer than behavior. The scientists suggest that these data explain why people with a family history of alcoholism are twice as likely to become alcoholics themselves, and why it's so difficult for some to stay sober even when they try to quit. The release of dopamine in the brain is a powerful motivator, part of an intricate reward system that has been honed by evolution to encourage important behaviors like reproduction. Unfortunately, alcohol and other addictions take over this vital pathway in the brain, compelling us to do things we might otherwise realize are damaging. But what's worse is that those who are predisposed to alcoholism have the same neurotransmitter release whether they drink or not, so even if they make the effort to avoid alcohol in most cases, this study suggests a sip may be enough to tip them over the edge. Citation: