A tiny organism is responsible for the mystic blue-green glow of the famous bio-bays. 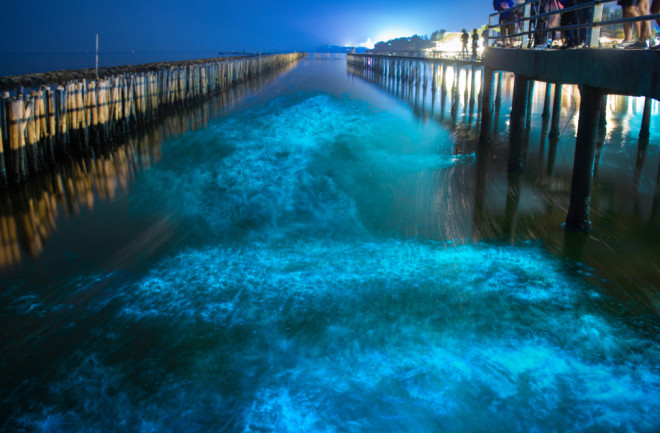 What are Bioluminescent Organisms?

Bioluminescence occurs during a chemical reaction called chemiluminescence – where chemical energy converts to radiant energy. Because this reaction is so efficient, it produces little heat. Notable bioluminescent organisms include certain species of fish, bacteria, plankton and insects.

Organisms use bioluminescence for several reasons. Some squids secrete a bioluminescent cloud to distract predators. Some fish, like the anglerfish, use a bioluminescent lure to attract their prey. Fireflies use their blinking lights while trying to attract a mate. However, when it comes to the glowing beaches, one organism is responsible — dinoflagellates.

Dinoflagellates are single-celled protists that live in algal blooms. They are complicated organisms because some are bioluminescent and some are not, according to Quay Dortch, a Senior Harmful Algal Bloom Scientist contracted with NOAA. Another complication is that those algal blooms may be toxic. Algal blooms occur all over the world. Dortch refers to these blooms as “the grass of the ocean.”

“Without algae and algal blooms, we wouldn’t have any other life in the ocean […] and possibly on land,” Dortch says. Marine algae provides about half of the oxygen in the atmosphere and dinoflagellates are at the center of these blooms.

Oxygen could cause these organisms to glow, though it is not known for sure. Some believe that the glow was once the bi-product of a survival mechanism that involves removing oxygen from the atmosphere — during a time when oxygen was scarce on Earth. There is a metabolic reaction that combines oxygen with luciferin — a reducing agent — and the combination creates a bioluminescent effect. Though more research is needed on this.

When large algal blooms occur and there is a high number of dinoflagellates, you can see a glowing effect on certain beaches and in certain bays at night.

Typically, the glowing algal bloom will occur in a bay where there is low risk of the sea sweeping dinoflagellates away. Some dinoflagellates, according to Dortch, produce a cyst that is like a seed. They drop the cyst to the bottom of the bay and create a cyst bed during poor environmental conditions. Once conditions are ideal, the seed germinates and the dinoflagellates re-emerge to the surface. Some cyst beds along the coast are unpredictable due to changing conditions. However, in these specific “bio bays,” you can see bioluminescence more often. You must agitate the water though, to make the dinoflagellates glow.

“If there aren’t waves,you have to do something, like have a fast boat go through the water or […] as you paddle, the water will be bioluminescent,” says Dortch.

The cells won’t glow if they aren’t mechanically agitated. Some people will swim in the bioluminescent bays, though it’s not always recommended. Oils and chemicals from sunscreen, or bug spray, on your skin could harm other organisms in the environment such as corals. These algal blooms and dinoflagellates are also toxic. They aren’t necessarily toxic to the touch, but some blooms can harm marine life, and humans if the toxins are ingested or breathed in, so it may be best to enjoy them from a distance.

Where Can You See Bioluminescence?

While these bioluminescent organisms exist all over the world, there are a few locations where you are more likely to see them light up the beach at night.

The Caribbean is home to a number of bio bays including Luminous Lagoon in Jamaica, Bio Bay in the Cayman Islands and Mosquito Bay in Puerto Rico — among others.

“I was out on a cruise and the water was this blue-green glow because there were waves,” Dortch says. “And also the Northern Lights were out. It was just amazing.”