Biggest T. rex Ever Discovered Was Covered in Battle Scars 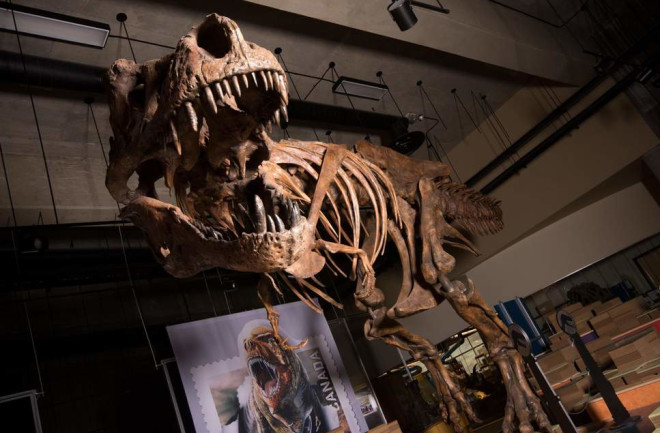 Scotty the T. rex. (Credit: Amanda Kelly) During its heyday 66 million years ago, Tyrannosaurus rex was one of the fiercest creatures on Earth. Now, one specimen discovered almost 30 years ago is revealing that the animals grew even larger than fossils have led some to believe. Scientists estimate the behemoth dinosaur weighed close to 10 tons and was about 30 years old. Its age is likely what allowed it to grow so big, the researchers say. Tyrannosaurs kept growing throughout their lives. “Tyrannosaurs seem to be an animal that grew very rapidly but did not last very long as an adult,” said Scott Persons, a paleontologist at the University of Alberta in Canada, who led the new research. “In fact, many individuals probably did not reach their full adult size.”

Researchers first stumbled on the skeleton of the large T. rex in 1991. The fossil, affectionately known as “Scotty” for the bottle of Scotch opened in celebration of its discovery, was uncovered near Eastend, Saskatchewan, a town in the province’s southwest corner, about 35 miles north of the Montana border. Scientists began excavating the dinosaur in 1994 and presented their findings Friday in the journal The Anatomical Record. Digging out the bones of the colossal T. rex was “a huge endeavor,” Persons said. The bones were encased in very hard, iron-rich cemented sandstone, making the fossils difficult to extract. Plus the scientists could only work on the excavation during the summer when the ground is not frozen. So, Scotty was collected in parts from the dig site and brought back to the lab for examination during the rest of the year. “That’s not an excavation,” Persons remarked. “That’s a 30-year mortgage.”

Only when Scotty was completely unearthed and fully assembled were the researchers able to complete their investigation. The 25-year analysis of the dinosaur’s bones revealed Scotty led a violent life. The T. rex had an infected jaw, an impacted tooth and broken ribs that healed before it died. Damage to the vertebrae in Scotty’s tail suggests another T. rex bit him at some point. Yet, the bones also revealed that Scotty was a big and long-lived survivor. When the researchers measured Scotty’s bones, they found the dinosaur was about 42 feet long and weighed nearly 20,000 pounds. When the team analyzed the bones’ growth pattern, which record yearly growth much like the annual growth rings of a tree trunk, they found Scotty was about 30 years old, making him the longest-lived T. rex known. The lack of other similarly sized T. rex fossils suggests most other dinosaurs did not live long enough to reach their full growth potential. “Scotty has pushed the envelope of how big we now know T. rex was,” Persons said. The dinosaur fossils also tell paleontologists that, “all the other dinosaurs that we know of are probably of a size range that’s significantly larger than what we currently know of. As we discover more of them we’re going to happen across larger individuals,” Persons added.