Beipaiosaurus was covered in the simplest known feathers

Beipaiosaurus was among the strangest of dinosaurs. It looked like a fusion of body parts taken from several other species and united in the unlikeliest of proportions. It had a stocky body, long arms adorned with massive claws, a long neck topped by an incongruously small head, and a beaked mouth. Bizarre as this cocktail of features is, it's the animal skin that has currently warrants attention. 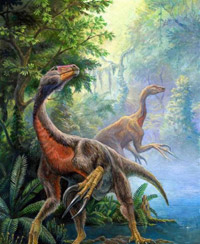 Fossils of Beipaiosaurus include impressions of its skin and these clearly show long, broad filaments clumped around its head, neck, rump and tail. They are feathers, but most unusual ones. Traces of feathers have been found on other dinosaurs (including the infamous Velociraptor) and they come in a variety of shapes and forms. But all are composite structures consisting of several slender filaments that either sprout from a single base or branch off a central stem.

Beipaiosaurus was also covered in some of these complex feathers, but it had other plumes that were far simpler. Each of these was a single, unbranched, hollow filament - exactly the sort of structure that palaeontologists had predicted as the first step in the evolution of feathers.

Until now, their existence was merely hypothetical - this is the first time that any have actually been found in a fossil. Other, more advanced stages in feather evolution have been described, so Beipaiosaurus provides the final piece in a series of structures that takes us from simple filaments to the more advanced feathers of other dinosaurs to the complex quills that keep modern birds aloft. 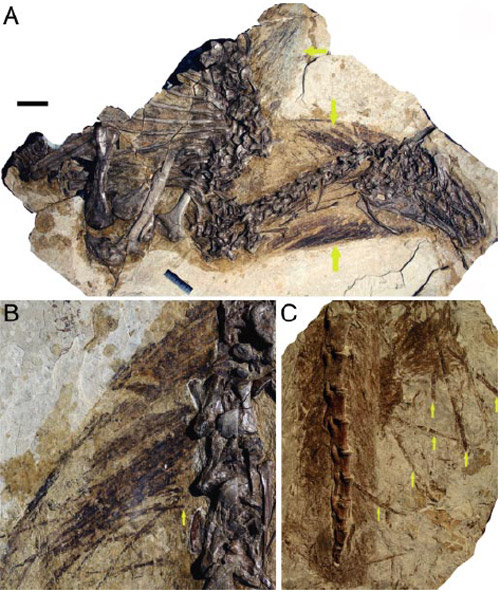 The simple feathers were discovered by Xu Xing, the famous Chinese palaeontologist who discovered such species as Microraptor and Dilong, among many others. The filaments are longer and broader than those possessed by other dinosaurs and Xu calls them "elongated, broad, filamentous feathers" or EBFFs.

Each is about 10-15cm long and 2mm wide - not exactly thick, but still 10-20 times broader than the simple feathers of Sinosauropteryx. They are also unusually stiff, for despite the rigours of death and fossilisation, very few of them are curved or bent.

In other species of extinct dinosaur, simple feathers probably helped to insulate their bodies. But Beipaiosaurus's feathers were too patchily distributed to have provided much in the way of insulation and they certainly weren't complex enough for flight.

Instead, Xu thinks that the animal used them for display - their length and stiffness are well-suited for such a purpose, and they're only found on parts of the body that bear display feathers in modern birds. They provide strong evidence that feathers were used for display long before they were co-opted for flight.

Beipaiosaurus's feathers provides yet more evidence that these structures, so characteristic of modern birds, actually evolved and diversified well before this group flew on the scene. For the moment, it's unclear how widespread these simple feathers were, whether they existed in other dinosaur species or even if they were found on other therizinosaurs - the bizarre group of dinosaurs that Beipaiosaurus belongs to. Is this species the exception, or just one of a wider group of (proto-)feathered friends?

Xu notes, perhaps controversially, that some species do bear long filaments that are remarkably similar to EBFFs. The primitive horned dinosaur Psittacosaurus had a row of long, hollow bristles at the base of its tail, which it probably used for display. And some pterosaurs (flying reptiles that aren't dinosaurs) are covered in similar "hairs" on their neck, body and tail.

With similar filaments turning up in such disparate groups, it's possible that the sorts of filaments that eventually became feathers were not just restricted to small, predatory dinosaurs. They may have turned up very early on in the evolution of the archosaurs - a diverse group of reptiles that includes dinosaurs, pterosaurs, crocodiles and the crurotarsans.