Rise of dinosaurs down to luck not superiority

Some 230 million years ago, giant reptiles walked the Earth. Some were large and fearsome predators; others were nimble and fleet-footed runners; and yet others were heavily armoured with bony plates running down their backs. Their bodies had evolved into an extraordinary range of shapes and sizes and they had done so at a breakneck pace. They were truly some of the most impressive animals of their time. They were the crurotarsans.

Wait... the who and what now? Chances are you've never heard of the crurotarsans and you were expecting that other, more famous group of giant reptiles - the dinosaurs. There is certainly no doubt that the dinosaurs were an evolutionary success story, diversifying from a standard body plan - a small, two-legged meat-eater - into a dazzling selection of forms. Today, living dinosaurs - the birds - still rule our skies and back in their heyday, they were the dominant back-boned animals on land for millions of years.

But what was the secret to their rise to power? Many palaeontologists believe that they simply outcompeted other animal groups that were around at the same time like the bizarre, buck-toothed rhynchosaurs or mammal-like reptiles like the cynodonts. Perhaps their upright postures made them faster or more agile; perhaps they were actually warm-blooded and able to cope with a wider range of climates. Either way, the fact that they and not the other reptile groups ascended to dominance is often taken as a sign of their superiority.

But Stephen Brusatte from Columbia University challenges that view. According to his take on Triassic life, the dinosaurs fared no better than their competitors, the crurotarsans, and were actually less successful for about 30 million years. They eventually supplanted these other groups because of luck rather than because they possessed any special advantage.

During the Triassic period, the crurotarsans (which eventually gave rise to today's crocodiles and alligators) were at their most diverse. They ranged from top predators like Postosuchus to the armoured aetosaurs like Desmatosuchus to swift, two-legged runners like Effigia and Shuvosaurus. Many of them were incredibly similar to the dinosaurs we know and love (see bottom image) and some were even mistaken for dinosaurs when they were first discovered. These strikingly similar bodies suggest that members of the two groups shared similar lifestyles and probably competed for the same resources.

Did the dinosaurs simply win the battle? Brusette noted that answers to this question often invoke nebulous concepts of "superiority" and he wanted to look at it from a more objective angle, comparing the two groups along measurable lines. To that end, he worked with three other palaeontologists to construct a family tree of 64 dinosaurs and crurotarsans, based on 437 features on each of their skeletons.

The team calculated how fast each group was evolving based on their bones. If dinosaurs really outcompeted the crurotarsans, you would expect to see the former group evolving at increasing rates during the Triassic, while the latter group's rate of evolution slowed. But that's not what happened. Instead, Brusette found that during the Triassic as a whole, the crurotarsans were keeping pace with the expansion of the dinosaur lineage. It's possible that during the mid-Triassic, the dinosaurs were evolving at a slightly more rapid rate, but it's hard to be sure based on such few samples.

Brusette also looked at the range of body plans developed by each group, also known as their "disparity". Animal groups with high disparity and a wide range of body shapes tend to have a more varied set of lifestyles, habitats and diets. And surprisingly, the crurotarsans had about twice as much disparity as the dinosaurs did at the time.

So for the 30 million years when the dinosaurs and the crurotarsans shared the planet, both were evolving at equal rates and it was the crurotarsans who were experimenting with twice as many body shapes. To Brusette, that's a blow to the long-standing view that the "superior" dinosaurs were in some way "preordained for success".

Instead, he suggests that the dinosaurs' success hinged on a combination of "good luck" and perseverance. Both they and the crurotarsans survived an extinction event 228 million years ago, which wiped out many other reptile groups like the rhynchosaurs. At the end of the Triassic period, some 28 million years later, the dinosaurs weathered another (much bigger) extinction event that finally killed the majority of crurotarsans off for good.

It's not clear why the dinosaurs persevered and the crurotarsans didn't. Perhaps the dinos had some unique adaptation that the crurotarsans lacked, which ensured their survival. But Brusette says that this explanation is "difficult to entertain" because the crurotarsans were more abundant at the time and had vastly more varied bodies. He also says that the death of certain groups during mass extinctions is more likely to be due to random factors rather than any specific aspect of their lifestyles.

Whatever the answer, the sudden volte face of the crurotarsans, from ruling reptiles to evolutionary footnotes, gave the dinosaurs their chance. They were the reptilian equivalent of videotapes, rising to dominance in the wake of a superior Betamax technology. In the brave, new world of the Jurassic, they could exploit the niches vacated by their fallen competitors.

The rise of the dinosaurs is often spoken of as a single event but it was more likely to have been a two-stage process. The predecessors of the gigantic, long-necked sauropods expanded into new species after the late Triassic extinction, while the big meat-eaters and the armoured plant-eaters only came to the fore as a second extinction heralded the start of the Jurassic. Brusette refers to the dinosaurs as the "beneficiaries of two mass extinction events", which is ironic given what happened next. About a 130 million years later, the dinosaurs' luck proved to be finite. They survived through two extinctions, but as the saying goes, third time's the charm. 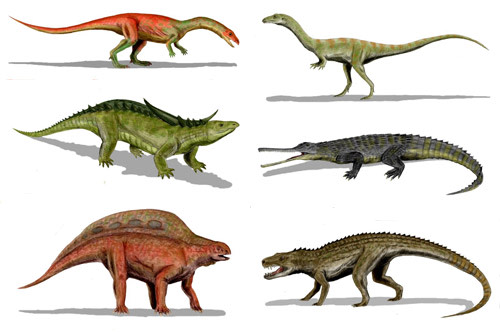