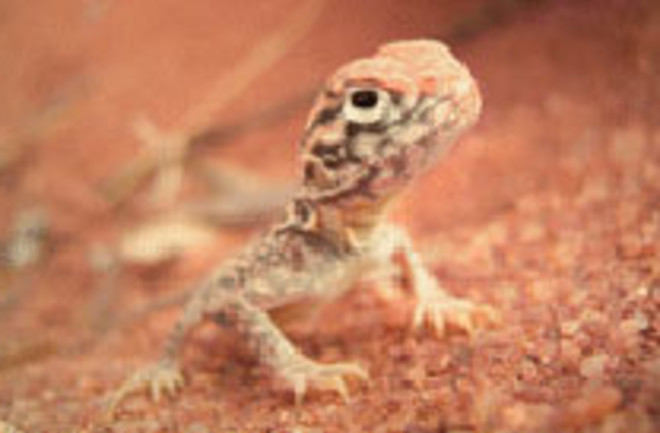 The first researchers who spotted Australian dragon lizards trotting along on their hind legs were amused, perplexed, and amazed. When the critters took off over the dusty plain in a high-speed dash, they lifted their front legs and ran bipedally, looking a bit like tiny dinosaurs. Those early researchers assumed that the trick must give the lizards an advantage in speed or endurance, but they didn't do the lizard races to prove it. They also wondered if the lizards were gradually evolving into entirely bipedal animals. Now, a new study in the Journal of Experimental Biology [subscription required] declares that the maneuver does not help the lizards put on extra speed after all, and actually decreases endurance. In a surprising twist, researchers called the lizards' upright stance just an "evolutionary accident." Researcher Christofer Clemente embarked on this knowledge quest based on a simple question:

Why bother running on hind legs when the four you've been given work perfectly well?... For birds and primates, there's a perfectly good answer: birds have converted their forelimbs into wings, and primates have better things to do with their hands. But why have some lizards gone bipedal? [Journal of Experimental Biology].

To find out, Clemente teamed up with Australian researchers and drove all over the outback collecting lizards; upon returning to the lab they set the reptiles up on treadmills and filmed their exertions. They found that just like an enthusiastic kid on a bicycle, when a dragon lizard gets going fast enough, the acceleration shifts its center of gravity to the back, making its front legs pop up in the equivalent of a wheelie. By analyzing video of the lizards running, Clemente found that there was no obvious advantage: the bipedal sprinters were no faster than typical lizards who run on all fours, and they couldn't dash for as long. In addition,

the theory that lifting up on two legs was an evolutionary advance and a step towards an entirely bipedal lifestyle was quashed when researchers realised that ancient species of lizard spent just as much time on two legs as the modern varieties [The Times].

Darwin tells us that the lizards wouldn't have evolved this strange trait via natural selection unless it gave them some advantage in their environment, but researchers say they only have guesses as to what that advantage is.

Even if the researchers haven't figured out exactly what has propelled the lizards through their evolutionary journey, disproving a faulty hypothesis is useful in itself. Physiologist Thomas Roberts of Brown University describes the new results as a cautionary tale. "There's been a dangerous history," he says, of looking at an animal and "making up a story" about how its various features must be beneficial. "This nice, comprehensive study," he says, quashes just such a made-up story [ScienceNow Daily News].