A new study predicts that 5,000 lakes across the mountain range could one day burst into valleys below. 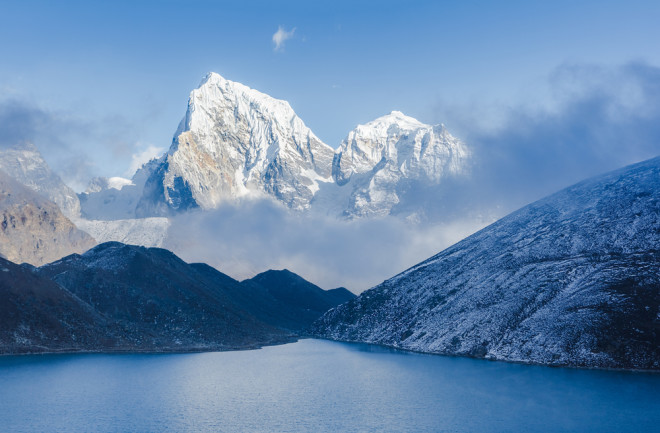 Himalayan lakes could begin flooding into the valleys below as glaciers melt and the climate warms. (Credit: Olga Danylenko/Shutterstock)

The Himalaya Mountains, known for their cold and snow, are melting. But where's all that water going? Into lakes — thousands upon thousands — nestled high in the mountains.

As the climate warms, glacial water collects in mountain crevasses, creating new bodies of water. One study reported that 85 new lakes emerged between 2003 and 2010 in the Sikkim Himalaya, a relatively small region of the mountain range in northeastern India.

And existing lakes appear to be expanding as well. A study from 2017 revealed they grew 14.1 percent over two and a half decades. As water levels rise, so does the risk of glacial lake outburst floods, or GLOFs.

GLOFs happen when natural dams, called moraines, burst open, allowing monsoonlike floods to rush into mountain valleys. Sometimes, these overflowing bodies of water can cause exceptional damage. One infamous incident occurred in 1985, when an avalanche caused over 1.3 billion gallons of water to flood out of glacial lake Dig Tsho onto a Nepalese village.

And the likelihood of other dangerous GLOFs occurring seems to be increasing, according to a study published Monday in Proceedings of the National Academy of Sciences. Researchers predict that thousands of Himalayan lakes are at risk for GLOFs, with the eastern Himalayas being three times more susceptible than other regions.

To determine risk, researchers ran 5.4 billion computer simulations on lake models constructed from satellite and topographic data spanning the mountain range. Their conclusion: 5,000 bodies of water in the Himalayas have unstable moraines.

Moraines are natural barriers of rock, dirt and ice created as glaciers grind through the soil. But a warming climate means the ice holding back millions of gallons of water could melt along with glaciers, causing the natural barrier to become unstable and eventually burst or overflow.

The lakes with the highest GLOF risk are ones with a larger volume of water and a history of flooding. A cluster of historical outburst floods stretches across Nepal, India and Bhutan, leading researchers to conclude that lakes in the eastern Himalayas have three times the risk of bursting.

Over the next decade, up to two-thirds of the Himalayas' total glaciers are predicted to melt. The researchers say this continual melting could cause rates of deadly floods to increase over time. And with the climate continuing to warm, it looks like these dangerous lakes won't be disappearing anytime soon.