The contents of this dino’s stomach reveal what the ‘living tank’ actually ate. 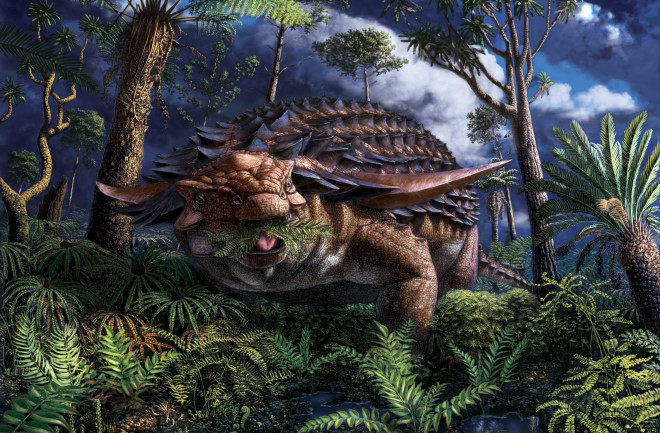 An illustration of Borealopelta chowing down on some ferns. (Credit: Julius Csotonyi/Royal Tyrrell Museum of Paleontology)

This armored dinosaur is a paleontologist’s dream. Named Borealopelta in 2017, the dinosaur’s fossil preserves a great deal of its bony armor in place. In fact, the animal is so intricately preserved that paleontologists have been able to work out the dinosaur’s color — rusty red above and lighter below. But the so-called “northern shield” still has secrets to reveal. Inside the dinosaur, protected by its bones, are the remnants of the ankylosaur’s last meal.

Paleontologists know relatively little about what dinosaurs actually had for lunch. For carnivorous animals, the key evidence often comes from bitten bones and petrified poop that contains bone shards and muscle fibers.

Among herbivores, fossil feces can narrow down a few menu options, but fossilized gut contents have been more contentious. It can be difficult to tell whether tatters of plants found inside a plant-eating dinosaur’s skeleton were remnants of a last meal — or simply happened to get mixed in with the sediment that buried the animal. Just this year, in fact, the gut contents found in a duckbill dinosaur turned out to be prehistoric compost mixed in among the bones during preservation.

“Dinosaurs that become fossils often get buried in the mud or in river channels,” says Caleb Brown of the Royal Tyrrell Museum. These circumstances can create confounding associations of bones and the material inside, which may or may not be the contents of the petrified dinosaur’s stomach.

But Brown says this specimen stands apart — and is the best-supported case for stomach contents in an herbivorous dinosaur. “And it contains the most detail about revealing what the diet was,” he adds. Brown and colleagues have published their study this week in Royal Society Open Science.

The Borealopelta fossil on display at the Royal Tyrell Museum in Alberta, Canada. (Credit: Etemenanki3/Wikimedia Commons)

Out of 16 criteria that Brown and co-authors developed to determine whether the plants were really gut contents or not, Borealopelta matched 14 of the relevant characteristics.

And despite going through the first half of the dinosaur’s digestive tract, the plant material remained surprisingly well preserved. “We embedded fragments of the stomach content mass in resin, sliced them, polished them until translucent, and looked at them under the microscope,” Brown says. The plants were preserved down to the cellular level, allowing the paleontologists to be more precise about what sorts of veggies the ankylosaur ate. Prior to death, Borealopelta wolfed down low-lying ferns, with some cycads and a little bit of conifer thrown in.

“What I like about this study is that it confirms some of the ideas proposed over several decades about the general type of food ankylosaurs were eating, while giving us a much more precise idea of the specific plants that made up the diet of Borealopelta,” says Victoria Arbour, a paleontologist at the Royal BC Museum.

These dinosaurs were quadrupeds, with heads low to the ground and relatively weak jaws fitted with small teeth. They didn’t have the impressive dental batteries of other dinosaurs of their time that would have allowed them to munch through rotting logs or hard wood.

Still, Brown says, there were some surprises. The absence of plants like horsetails in the gut contents, and the rarity of conifer material, might seem odd given how prevalent they were in the dinosaur’s habitat. It seems this Borealopelta was something of a picky eater.

“The biggest surprise for me was the charcoal,” Brown says, pointing to the small amount of burnt wood that suggested this dinosaur was eating low-lying plants in an area that had recently had a wildfire. In fact, that association might explain the presence of so many ferns. Arbour notes that ferns are some of the first plants to grow in fire-affected landscapes.

“It’s interesting to think that this dinosaur may have ever survived the wildfire that created the charcoal it ate,” she adds, “only to meet its demise in a watery tomb later on.”