Are Some Countries Happier Than Others?

Nordic nations frequently top the charts thanks to their comprehensive public services. 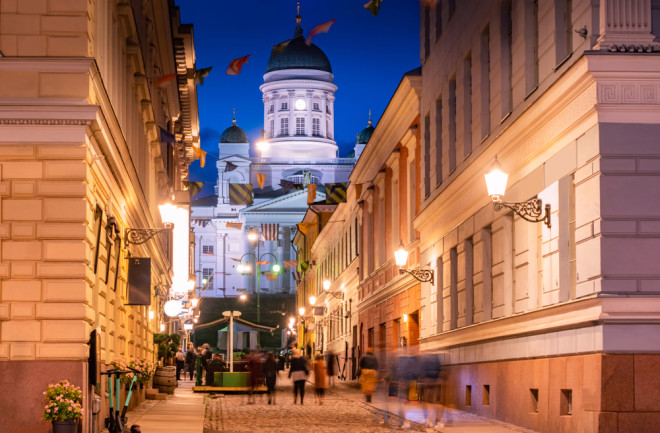 Finland has been designated the world's happiest country four years in a row, according to a United Nations report. (Credit: FOTOGRIN/Shutterstock)

The December sun never rises above the horizon of Finland’s Arctic north. Even in the far south of the country, where the bulk of Finns live, residents witness merely six hours of sunlight per day in the depths of winter. Despite this darkness, Finland is officially the world’s happiest country — and it has earned this accolade for four years in a row. That’s according to the United Nations’ 2021 World Happiness Report, which is based on a single (albeit subjective) question: Participants all around the globe are asked to rate their happiness on a scale of one to ten.

Other Nordic nations, including Iceland, Denmark and Sweden, also hold top spots on the list. The only non-European country that scores among the happiest ten is New Zealand. Meanwhile, nations including Afghanistan, South Sudan and Zambia consistently fall toward the bottom of the list. The United States currently sits at number 14.

And while a lack of wealth might land a nation at the bottom of the table, money alone isn't enough to push a country to the top. Take Hong Kong, for example. It’s the tenth richest country in the world when it comes to gross national income (GNI), according to World Bank data. But Hong Kong is positioned in the bottom half of the UN’s index, behind nations with lower GNIs such as Albania, Ghana and Ecuador.

Overall, researchers say stable politics, social safety nets, free health care and high levels of public trust in a democratic system are the ingredients for a happy population. “In the end it’s not the culture, it’s the institutions of a country,” says Frank Martela, a psychology researcher at Aalto University in Finland who contributes to the UN’s report.

Hong Kong’s less-than-stellar performance is part of a regional trend, according to a report from the Legatum Prosperity Index, which concludes that “progress slowed in Asia-Pacific mainly due to a deterioration in safety and security, personal freedom, economic quality and education.”

India marks another example in which increasing wealth doesn’t necessarily translate to rising happiness, Martela says. “For the last ten years, its GDP has been growing rapidly, but its happiness is going down.” This could be a manifestation of political instability in the subcontinent and growing tensions between India’s religious communities.

So, how exactly has northern Europe managed to achieve such a satisfied state of mind? “When we went through all the research on this question, it seems like institutions are best able to predict happiness on a national level,” says Martela. “Nordic countries have quite a few things going for them — such as extensive welfare, free kindergarten and healthcare. These things are key because they mean that people can trust society to take care of them if something goes wrong in their life.”

According to data gathered by Reporters Without Borders, Nordic people also enjoy the world’s least press censorship and corruption. “The quality of democratic institutions is therefore high,” says Martela. If citizens have confidence that the democratic system is working, then they’re more likely to feel like their vote matters. That’s another boost to residents’ wellness.

What all of this means: Government officials should rethink how they evaluate the impact of their policies, says Martela. “Gross domestic product has been used as a shorthand for success for too long. The ultimate aim of governments should be to ensure as many citizens as possible are happy.”