Are lower pesticide residues a good reason to buy organic? Probably not. 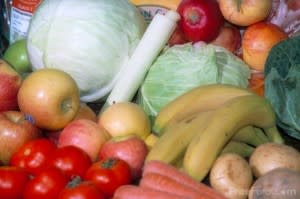 A lot of organic supporters are up in arms about the recent Stanford study that found no nutritional benefit to organic foods. Stanford missed the point, they say—it's not about what organic foods have in them, it's what they don't. After all, avoidance of pesticide residues is the #1 reason why people buy organic foods. Yes, conventional foods have more synthetic pesticide residues than organic ones, on average. And yes, pesticides are dangerous chemicals. But does the science support paying significantly more for organic foods just to avoid synthetic pesticides? No. A Pesticide Is A Pesticide I'm not saying that pesticides, herbicides, and insect repellants aren't toxic. I certainly wouldn't recommend drinking cocktails laced with insect-repelling chemicals, for without a doubt, they can be bad for you. Pesticide exposure has been linked to all kinds of diseases and conditions, from neurodegenerative diseases like Parkinson's to cancer. What we do know, though, is that natural isn't synonymous with harmless. As a 2003 review of food safety concluded, "what should be made clear to consumers is that 'organic' does not equal 'safe'." I've said it before and I'll say it again: there is nothing safe about the chemicals used in organic agriculture. Period. This shouldn't be that shocking - after all, a pesticide is a pesticide. "Virtually all chemicals can be shown to be dangerous at high doses," explain scientists, "and this includes the thousands of natural chemicals that are consumed every day in food but most particularly in fruit and vegetables." There's a reason we have an abundance of natural pesticides: plants and animals produce tens of thousands of chemicals to try and deter insects and herbivores from eating them. Most of these haven't been tested for their toxic potential, as the Reduced Risk Program of the US Environmental Protection Agency (EPA) applies to synthetic pesticides only. As more research is done into their toxicity, however, we find they are just as bad as synthetic pesticides, sometimes worse. Many natural pesticides have been found to be potential – or serious – health risks, including those used commonly in organic farming. In head-to-head comparisons, natural pesticides don't fare any better than synthetic ones. When I compared the organic chemicals copper sulfate and pyrethrum to the top synthetics, chlorpyrifos and chlorothalonil, I found that not only were the organic ones more acutely toxic, studies have found that they are more chronically toxic as well, and have higher negative impacts on non-target species. 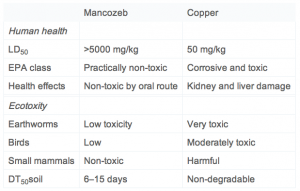 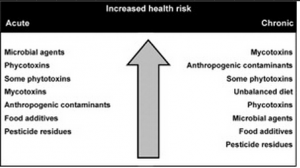 Furthermore, the focus on pesticides is misleading, as pesticide residues are the lowest food hazard when it comes to human health (as the figure from the paper on the right shows). They conclude that as far as the scientific evidence is concerned, "it seems that other factors, if any, rather than safety aspects speak in favor of organic food." If you don't want to listen to those people or me, listen to the toxicologists, who study this stuff for a living. When probed about the risk that different toxins pose, over 85% rejected the notion that organic or “natural” products are safer than others. They felt that smoking, sun exposure and mercury were of much higher concern than pesticides. Over 90% agreed that the media does a terrible job of reporting the about toxic substances, mostly by overstating the risks. They slammed down hard on non-governmental organizations, too, for overstating risk. What's in a Name? There's good reason we can't detect differences between organic and conventional diets: the labels don't mean that much. Sure, organic farms have to follow a certain set of USDA guidelines, but farm to farm variability is huge for both conventional and organic practices. As a review of organic practices concluded: “variation within organic and conventional farming systems is likely as large as differences between the two systems.” The false dichotomy between conventional and organic isn't just misleading, it's dangerous. Our constant attention to natural versus synthetic only causes fear and distrust, when in actuality, our food has never been safer. Eating less fruits and vegetables due to fear of pesticides or the high price of organics does far more harm to our health than any of the pesticide residues on our food. Let me be clear about one thing: I'm all for reducing pesticide use. But we can't forget that pesticides are used for a reason, too. We have been reaping the rewards of pesticide use for decades. Higher yields due to less crop destruction. Safer food because of reduced fungal and bacterial contamination. Lower prices as a result of increased supply and longer shelf life. Protection from pests that carry deadly diseases. Invasive species control, saving billions of dollars in damages—and the list goes on. Yes, we need to manage the way we use pesticides, scrutinize the chemicals involved and monitor their effects to ensure safety, and Big Ag (conventional and organic) needs to be kept in check. But without a doubt, our lives have been vastly improved by the chemicals we so quickly villainize. If we want to achieve the balance between sustainability, production outputs, and health benefits, we have to stop focusing on brand names. Instead of emphasizing labels, we need to look at different farming practices and the chemicals involved and judge them independently of whether they fall under organic standards. In the meantime, buy fresh, locally farmed produce, whether it's organic or not; if you can talk to the farmers, you'll know exactly what is and isn't on your food. Wash it well, and you'll get rid of most of whatever pesticides are on there, organic or synthetic. And eat lots and lots of fruits and vegetables—if there is anything that will improve your health, it's that.

Before you say otherwise and get mad at me for mentioning it, rotenone is currently a USDA approved organic pesticide. It was temporarily banned, but reapproved in 2010. Before it was banned, it was the most commonly used organic pesticide, and now—well, without public data on pesticide use on organic farms, we have no idea how much it is being used today.