Are Big Earthquakes a Concern for the Eastern United States? 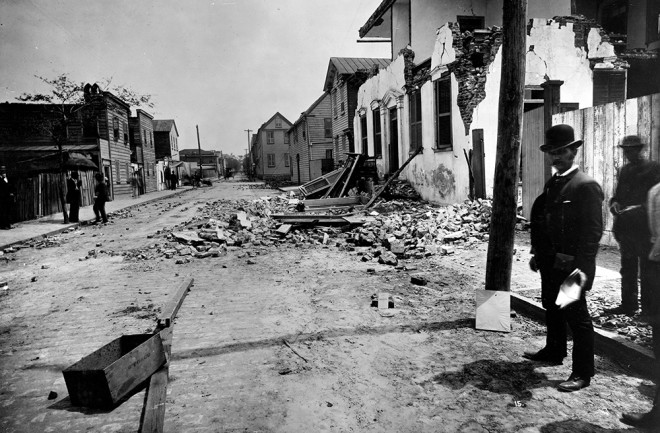 Most people who live in the eastern United States likely don’t worry too much about earthquakes. Most of the shaking that goes on across the country happens on the west coast, running up and down the San Andreas fault zone or in the Cascades of Oregon and Washington. Occasionally, an earthquake will rattle Yellowstone or Oklahoma feels an temblor brought on by waste water being pumped into the ground. But New York City? Boston? Charlotte? Washington DC? Other than the Virginia earthquake of 2011, most folks don’t even regard big earthquakes as an issue.

This is a tricky question to tackle because how rare large earthquakes tend to be in eastern North America. Trying to extrapolate how often earthquakes larger than magnitude 6 could occur typically involves examining the historical catalog. For parts of eastern North America, that might get us back 400 years. However, it really isn’t until the last 100 years that we have a good record of earthquakes that have been measured using seismometers. This means much of our knowledge of earthquakes on the east coast comes from historical records of large, noticeable events in places where people noticed them.

There are definitely clusters of small (< M3) earthquakes in eastern North America, centered in places like Charlevoix, Quebec, central New Hampshire, Charleston, South Carolina and central Maine. Those clusters can be interpreted a couple ways. First is that these betray the fact that there are stresses and faults in these places that cause these small temblors. The second is that these represent long-lived aftershocks of much larger earthquakes.

We know the latter to be true for places like Charlevoix and Charleston, where recent large earthquakes have occurred (see below). Two M6-7 earthquakes are known to have happened in Quebec, one in 1663 and one in 1925. Charleston was struck by a M7 earthquake in 1886 (see image above). Beyond that, large earthquakes have happened off Cape Ann in Massachusetts (M6, 1755), off Nova Scotia (M7.2, 1929, which also produced a tsunami) and in Baffin Bay (M7.4, 1933), along with the M5.8 2011 earthquake in northern Virginia.

However, there might be more. John Ebel (Boston College) has interpreted small earthquake patterns as long-lived aftershocks of massive earthquakes, sometimes happening centuries later. Aftershocks from large earthquakes will diminish following Omori’s Law, which describe lots of earthquakes right after the major event and then a decay to lower rates of earthquakes that can last decades to centuries (think of it like a logarithmic decay that takes a long, long time to reach 0).

Using this method of “paleoseismicity”, Ebel (2000, Seismological Research Letters)suggested that central New Hampshire may have experience a M~6-7 earthquake in the 1630s. Some other places that may have experience M6 or higher earthquakes over the past few thousand years, based on these paleoseismic patterns, include Passamaquoddy Bay in Maine, Littleton in Massachusetts, Dover-Foxcroft in Maine and the Maine-New Hampshire-Quebec border region. However, there isn’t agreement about the location or even existence of some of the inferred past major earthquakes.

Some of these regions appear has areas of elevated earthquake risk in the 2014 US Geological Survey earthquake hazard map (see below) for the country. Much of the areas of elevated earthquake hazard in the eastern United States center on places we know that seen major earthquakes like Charleston, northern Virginia and Cape Ann. What if these regions are places where now there might be less hazard because the earthquakes released stress? Again, a question that is hard to answer.

Why are there even earthquakes in eastern North America? The east coast is a passive margin — that is, there aren’t any active tectonic events like subduction, collisions or spreading going on. That doesn’t mean that the continent is devoid of stress, but it likely does mean that it might take a long time for stress to build, possibly over hundreds of thousands to millions of years. This could suggest that the potential location of large earthquakes might be hard to anticipate because once a large earthquake happens, the long-building stress is released. So, unlike in California where recurrence intervals between earthquakes like be decades or centuries, we might be talking a million years on the East Coast.

What they found in creating synthetic earthquake histories and sampling them in 150 year intervals is that we might be underestimating the maximum magnitude of potential earthquakes in eastern North America. This is mostly due to the fact that our current historical catalog is too short to capture the longer recurrence intervals for east coast earthquakes.

Where does that leave people living in eastern North America? First off, remember that even though we might be undercounting and underestimating large earthquakes, they are still fairly rare events. However, that doesn’t mean it is a bad idea to be prepared. The northeastern states have developed earthquake hazard plans as part of their Emergency Consortium, as has states centered around the New Madrid fault zone in central North America. Even Ohio, a seismically quiet state (until recently), has earthquake information. Be familiar with what you can find about potential emergency plans for earthquakes near where you live!

Eastern North America is in no way “due” for a major earthquake, but we do need to consider how a city like Boston would cope with such an event. Much of the infrastructure is getting older and not designed to be seismically resilient. If Ebel is right that a M6+ earthquake happened in Littleton, only ~45 kilometers from Boston, then the city has been in relatively close vicinity to two major earthquakes over the last 1,000 years (including Cape Ann in 1755). Even worse, an event like the 1886 earthquake in Charleston did not seem to have any known prior earthquakes in the region. We shouldn’t live in fear of such events, but even in places where earthquakes have not happened, we should consider the “what if”. Even having some preparedness during such a disaster will save lives