Ants That Illegally Procreate Are Revealed By Their Guilty Smell 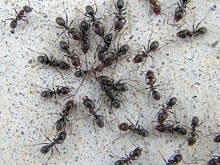 Worker ants that get too big for their britches and attempt to reproduce in a colony ruled by a queen are attacked by fellow colony members, according to a new study. By ant colony conventions, worker ants are supposed to give up procreating themselves in favor of taking care of the queen's eggs. Researchers found that the occasional cheating worker ant gives off a distinct "fertility pheromone" that notifies other ants and incurs their wrath. Entomologist Les Greenberg said, "

. The queen ant is the only fertile female in an ant colony. Worker ants are mostly sterile females, but they

are biologically capable of a type of parthenogenesis, the process that allows a female to produce offspring without a mate. When they try, however, they produce chemicals called pheromones that their sisters detect with antennas [National Geographic News]. The hydrocarbon-based pheromones indicate their reproductive status and are also transmitted to the eggs they lay.

Jürgen Liebig, co-author of the study in

described pheromone detection: "It's basically smell, but not the smell we know" [National Geographic News].

Researchers had observed that rogue reproducers were attacked by other worker ants. To determine whether the pheromones functioned as a scarlet letter, researchers produced a synthetic hydrocarbon in the lab that had the same olfactory properties as the natural one, then plucked a few completely innocent ants from a nest and dabbed the chemical on them

. Upon their return to the colony, the pheromone-coated ants were swiftly

bitten, pulled and held by their peers [BBC News].

However, in colonies without a queen, ants marked with the pheromone were not punished. Pheromone signaling may also be used by other social insects, such as bees and wasps. Liebig believes that the temptation to cheat exists in any society, from insects to humans, although the methods of "reproductive policing" may be different.

"The idea that social harmony is dependent on strict systems to prevent and punish cheating individuals seems to apply to most successful societies," he said [BBC News].