A study shows that the size of ancient animals' ear canals could crack one of the 'great unsolved mysteries of paleontology.’ 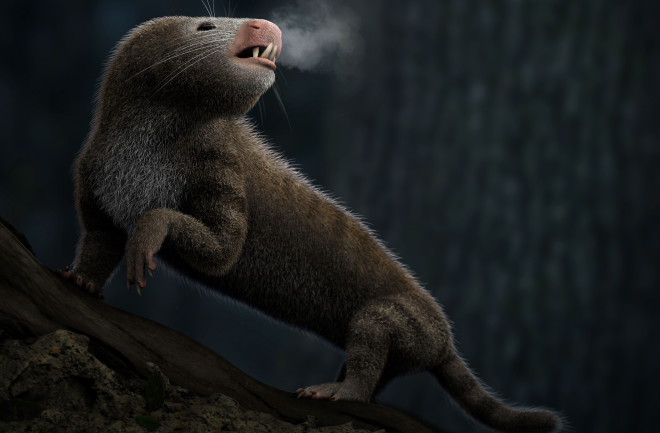 A mammaliamorph breathing out hot hair in a frigid night, hinting at endothermy (warm-bloodedness).(Credit: Luzia Soares)

All mammals are warm-blooded, meaning that their bodies maintain their temperatures internally and independently of the temperature of their surroundings. This physiological feature is imperative in allowing mammals to survive and to stay toasty through the coldest conditions. But, despite its importance, the best way to determine when warm-bloodedness initially developed remains a mystery.

Recent research in Nature presents a new method for solving this mystery, stating that the size of the tiny canals in an animal’s ears can enable scientists to pin down the start of warm-bloodedness. Plus, in addition to proposing a long-sought-after solution to this problem of methodology, the research also reveals that the transition to warm-bloodedness probably took place around 233 million years ago, much more recently and much more quickly than previously believed.

To scientists, it has seemed almost impossible to identify when the ancestors of modern-day mammals developed their warm-bloodedness, officially known as endothermy. Part of the problem is that they cannot measure the temperature of fossils that only lived millions and millions of years in the past.

Now, a team of paleontologists proposes that they’ve found a way to sidestep this problem. The tiny canals in an animal’s ear contains fluids whose consistency is impacted by body temperature. And the team says that an increase in an animal’s internal temperature requires the canals to shrink in size to ensure that the now thinner, runnier fluid continues to flow properly through the ear.

"During the transition to endothermy, morphological adaptations were required to keep optimal performance, and we could track them in mammal ancestors," says Romain David, a study author and a researcher at London’s Natural History Museum, in a press release.

The team speaks optimistically about the ability to pinpoint when the morphological adaptations, as well as the transition to warm-bloodedness, occurred.

"The origin of mammalian endothermy is one of the great unsolved mysteries of paleontology. Many different approaches have been used to try to predict when it first evolved, but they have often given vague or conflicting results," says Ken Angielczyk, a senior study author and a curator of paleomammalogy at Chicago’s Field Museum, in a press release. "We think our method shows real promise." Plus, the approach seems to provide real results.

To test their method, the paleontologists analyzed the ears of 341 separate species, 64 of which were extinct. They determined that the shift to smaller ear canals, which would correspond to warm-bloodedness, occurred approximately 233 million years ago — about 20 million years later than the previous predictions — and much more quickly, at approximately the same time as mammalian ancestors acquired their first tufts of fur.

"Contrary to current scientific thinking, our paper surprisingly demonstrates that the acquisition of endothermy seems to have occurred very quickly in geological terms, in less than a million years," says Ricardo Araújo, another study author and a researcher at University of Lisbon’s Instituto de Plasmas e Fusão Nuclear, in a press release. "It was not a gradual, slow process over tens of millions of years as previously thought."

The concurrent appearance of warm-bloodedness and fur seems to provide further support for the team’s methodology, since the two traits would’ve worked side by side to keep animals warm. While endothermy produces warmth, the paleontologists say that fur traps that warmth within the body, making sure that animals stay nice and comfortable, no matter the conditions.