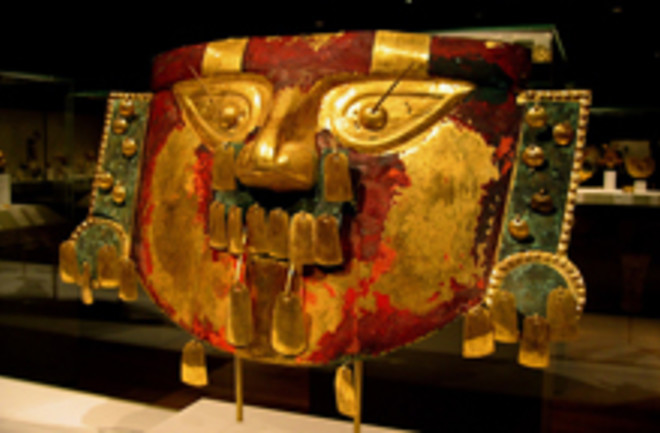 As early as 1400 B.C., the people of the Andes dug deep to mine the mercury ore called cinnabar, which they crushed to produce a bright red pigment. The pigment, vermilion,

was used in ancient Andean rituals and is frequently found adorning gold and silver ceremonial objects in ancient burials of kings and nobles in South America [National Geographic].

While obvious traces of those mines were obliterated by later mining operations run by the Incas and then the Spanish colonists, a clever new study used sediment samples from lake bottoms to uncover evidence of the ancient mining--and the accompanying mercury pollution. Researchers found that the cinnabar mining started

long before the Chavín culture—which Cooke described as "the cradle of complex Andean culture"—peaked, between 800 B.C. and 400 B.C. in central Peru. "The traditional thinking has been that large-scale mining and metallurgy only begins after you get the emergence of large-scale societies that have social stratification and people can specialize in different crafts," Cooke said [National Geographic].

Instead, Cooke suggests that mining may have encouraged the rise of complex society, as a leader with access to vermilion could have held great sway over a large group of people. To determine the history of mercury mining around Huancavelica, Peru, the researchers

extracted sediment cores from three lakes around the Santa Barbara mine. By analysing the history of mercury pollution in these lakes, which are different distances from the mine, they were able to estimate the levels of mercury pollution released by mining and how far this taint spread. At the two lakes closest to the Santa Barbara mine, "dramatic increases" in mercury are seen dating back to about 1400 BC [Nature News].

leads Cooke and his co-workers to suggest that the Incas must have been not just grinding up the cinnabar to make dye but also smelting it to extract the mercury. This conclusion is likely to be controversial, as the smelting of ore to produce mercury for silver processing is currently associated with the colonial rule of the Spanish [Nature News].

Cooke's team used radiocarbon dating to determine the age of each sediment layer, but critics of the study argue that the technique is not refined enough to distinguish between the end of the Incan age and the early colonial period. Regardless of exactly who mined what when, researchers say that the

three-millennia-long mercury mining tradition at Huancavelica—including a 450-year colonial history that earned the mine its nickname Mina de la Muerte (Mine of Death)—has likely left behind a poisonous legacy in this central Peruvian highland region, Cooke believes. "We haven't done any direct measurements of mercury in fish or blood-mercury levels in the residents or anything, but I would suspect it is probably one of the more polluted regions in the world," Cooke said [National Geographic].