The First Chocoholics: Native Americans Imported Cacao From 1,200 Miles Away 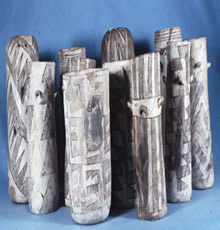 The chemical signatures of chocolate have been found on pottery shards in New Mexico dating from 1000 A.D., indicating that the practice of drinking chocolate had reached North America 400 years earlier than expected--and that the imbibers went to great lengths to procure the delicacy.

The nearest source for the cacao, which was made into a bitter beverage used in religious and other rituals, was more than 1,200 miles to the south in Mexico [Los Angeles Times].

Traces of the cacao seeds that are the source of chocolate

were found in shards from cylinder jars found at Pueblo Bonito in Chaco Canyon in northwestern New Mexico. The site was occupied by the Chaco culture for millenniums, but it grew rapidly beginning about AD 900. The multistory pueblo itself contains an estimated 800 rooms [Los Angeles Times].

One of those rooms housed a collection of 111 tall, cylindrical vessels, and anthropologist Patricia Crown had been puzzling over their use. Previously, researchers thought that Spanish conquistadors carried the first cacao seeds to North America centuries later.

Crown had learned of similarly sized jars from some Maya sites that researchers knew were specialty vessels for cacao drinks. (When the symbols on the Maya jars were finally deciphered, they read the equivalent of, “This is Bill’s cacao vessel”) [Science News].

Crown sent shards from several jars to a specialist at the Hershey Center for Health and Nutrition for analysis of the residue on the shards. In a report in the

Proceedings of the National Academy of Sciences,

the researchers announce that the analysis showed traces of theobromine, a compound found in cacao and chocolate. Archaeologist Cameron McNeil comments that the Chaco Canyon people's willingness to bring cacao 1,200 miles from Central America indicates that it was a prized commodity.

"This would have been phenomenally expensive" given the sheer length of the trading route, she says. That means that just "as fine wines and brandies advertise the lofty position of individuals in our own culture," drinking chocolate was probably a sign of status for these early Native American communities [ScienceNOW Daily News].