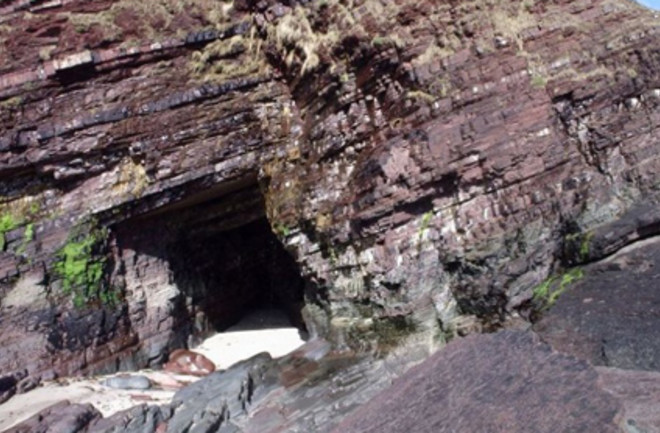 A huge spike in the Earth's atmospheric oxygen about 800 million years ago, the story goes, paved the way for the Cambrian explosion a couple hundred million years later, and with it the rise of complex life. But a new study out in Nature says that picture is incomplete. Researchers found evidence of substantial oxygen 1.2 billion years ago, meaning that the conditions needed for complex life appeared much earlier than scientists knew, and that perhaps something else was required to set off the explosion of biodiversity. The geologists led by John Parnell hunted in the Scottish Highlands for clues in ancient rocks, where evidence of ancient bacteria could reveal how much oxygen was around 1.2 billion years ago.

Before there was a useful amount of free oxygen around, these bacteria used to get energy by converting sulfate, a molecule with one sulfur atom and four oxygens, to sulfide, a sulfur atom that is missing two electrons. Geologists can get a glimpse of how efficient the bacteria were by looking at two different sulfur isotopes, versions of the same element that have different atomic masses. Converting sulfate to sulfide leaves the rock with a lot more of the isotope sulfur-32 than would be there without the bacteria’s help. [Wired.com]

in the cyclical chemical reactions, with one group of bacteria turning sulfate into sulfide and another doing the opposite conversion. This allowed the geologists to gauge how high the atmospheric oxygen level may have been, Parnell says.

"Evidence of this chemical reaction tells us that the levels of oxygen in the atmosphere were at this key point for evolution, at this much earlier stage in Earth's history. Our findings, which shift this key point in the evolution of life on Earth to a much earlier date than previously proven, will give impetus to further investigations into the timescale of the development of complex life, which followed this event," he said. [The Independent]

Suppose Parnell's team is correct, and these chemical reactions mean that the level of oxygen 1.2 billion years was roughly the same as the during the Cambrian explosion—that is, high enough to give rise to more complex forms of life than simple microbes. Then why did complex life wait so long to get going? It's an open question, but one possible trigger

was the end of an ice age:

The earliest indisputable evidence for complex animal life - slug-like organisms called Kimberalla - are not seen until the Ediacaran Period, which came at the end of the last great global glaciation These fossil remains are found today in 555-million-year-old rocks in Australia and Russia. "What we are now showing is that the conditions in the atmosphere were in place [1.2 billion years ago], so it probably needed some other factor to trigger the early evolution of complex life and the fact that the Ediacaran fauna occurs after the 'snowball Earth' episode suggests those two are linked somehow," said Professor Parnell. [BBC News]

Related Content: DISCOVER: Just One Bite And Life Took Off

80beats: How “Snowball Earth” Could Have Triggered the Rise of Life

80beats: Why Didn’t the Young Earth Freeze Into an Ice Ball?

80beats: One of the Earth’s Earliest Animals Left Behind “Chemical Fossils”

Image: Parnell et. al / Nature (The cave where the rocks were found)