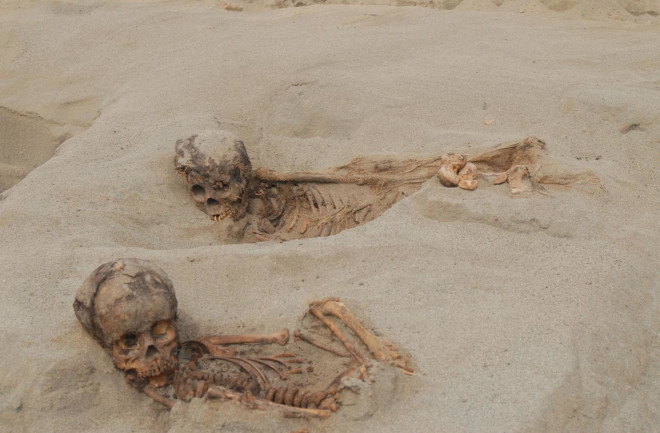 Mummified children rest in a grave found at the as Huanchaquito-Las Llamas site in Peru, the location of the largest known mass child sacrifice in the world. (Credit: John Verano / Creative Commons)

The remains of nearly 140 children dating to the year 1450 have been unearthed along the northern coast of Peru. Archaeologists say the burial is the site of the largest known mass child sacrifice in the world.

The children — as well as the remains of more than 200 young llamas — were found in a mass grave located on a cliff just a thousand feet from the Pacific Ocean in the small, present-day fishing community of La Libertad near Trujillo. Archaeologists say the children and llamas were slaughtered all at once in a ritual sacrifice performed by the ancient Chimú civilization. It is thought the children and llamas were killed during a time when an extreme El Niño weather system was wreaking havoc on the Peruvian coastline.

Like many pre-Columbian cultures, the Chimú practiced human and animal sacrifice during religious rituals intended to appease their gods. But until now, archaeologists didn’t think that the Chimú empire killed large numbers of children. Child sacrifices of this magnitude are unprecedented not only in this region, but in the world, the researchers say. Previously, the largest confirmed child sacrifice involved 42 children at the Aztec Templo Mayor in modern-day Mexico City.

Finding an even bigger instance of mass child sacrifice is unusual, raising a number of questions about what drove the Chimú to massacre so many young boys and girls. The researchers pieced together what they know so far in a paper published online in PLOS ONE on Wednesday, which chronicles the discovery originally made in 2018 at the site known as Huanchaquito-Las Llamas.

Anthropologist John Verano, who assisted with the excavation and analysis, said the death toll alone suggests that the Chimú performed the sacrifices in response to a catastrophic event. A number of other Chimú sacrificial sites have been found in the area, but none were exclusively devoted to children.

“We never expected to find a sacrifice site like this. But now that we know about this practice, we can begin to theorize why such a mass offering might have been made. I think it suggests that there was some major crisis that needed to be mitigated by a special sacrifice such as this one,” Verano said.

Another clue that points to a civilization in chaos was buried along with the bodies. Unusual mud layers and preserved footprints near the graves suggest the sacrifice followed heavy rainfall. This normally arid region may have been crippled by extreme, wet weather brought on by an El Niño system. Chimú leaders may have interpreted the inclement weather as punishment from the gods and planned a drastic sacrifice to quell their wrath.

The children used in the sacrifice included both boys and girls and ranged in age from four to 14. They likely came from different regions and ethnic groups within the Chimú empire. Although it’s unknown if the children were volunteered or were forcefully taken, ancient Chimú culture probably saw children as the most valuable sacrifice that could be made to the gods. Llamas were also a high form of offering for the Chimú because they were valuable sources of transportation, fur and food.

Many children and llamas were found with visible cut marks across their sternums and ribs—presumably to rip out their hearts. The archeologists don’t know if the children were dead or alive when their hearts were taken, but they think the organs were used in a sacrificial ceremony. Some Mesoamerican civilizations, such as the Aztecs, are known for gruesome sacrificial ceremonies that included ripping out beating hearts from conscious victims.

Two women and a man was were also found near the site. The researchers think the adults participated in the ritual sacrifice before being bludgeoned to death, as their bodies showed evidence of forceful injuries.

Beyond a few ceramic beer jugs and stirring paddles left behind that point to ritual drinking, little else is known about the sacrifice. More analysis could help the researchers uncover who these children were and why they were victims of this Chimú ritual.

The Chimú empire, which flourished from 1100 to 1470, was conquered by the Inca not long after this mass child sacrifice occurred.