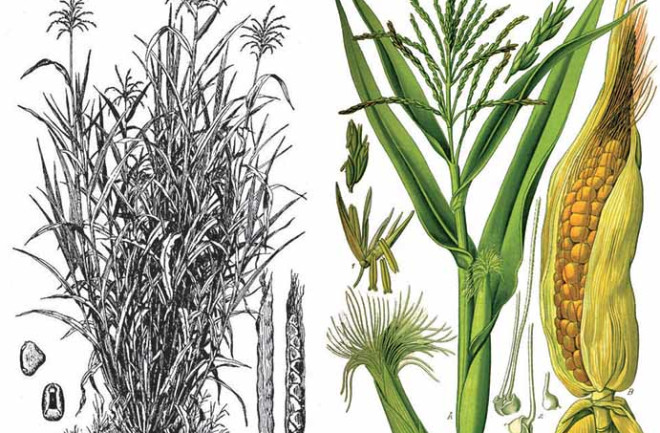 Teosinte and maize look like very different plants, but it only took a few changes to teosinte's genes to get maize. (Credit: Ándrea Elyse Messer/Penn State)

In Mexico, corn tortillas rule the kitchen. After all, maize began evolving there from a grass called teosinte some 9,000 years ago, eventually becoming a staple consumed around the world.

But that spread presents a puzzle. In 5,300-year-old remains of maize from Mexico, genes from the wild relative show that the plant was still only partly domesticated. Yet archaeological evidence shows that a fully domesticated variety was being grown in South America more than 1,000 years before that.

“How can you have maize as part of a crop complex in South America when domestication isn’t even finished in Mexico?” asks Logan Kistler, curator of archaeobotany and archaeogenomics at the Smithsonian Institution in Washington, D.C.

He and his colleagues now believe they have found the answer in the southwestern Amazon basin, where people apparently continued domesticating an early “proto-maize” from Mexico, as well as other key crops such as manioc, squash and sweet potatoes.

Maize that humans were nurturing in Mexico probably continued to contain genes from its wild relative because it was cross-breeding with nearby teosinte plants, Kistler says. But when travelers carried some seeds to South America, where they were planted far from their place of origin, the influence of teosinte faded.

Not long ago, such a detailed look at crop evolution would have been unthinkable, but huge leaps in technology in the past decade have allowed researchers to read a plant’s history in its genome.

A similar investigation recently bared the ancient roots of Theobroma cacao, whose seeds are made into cocoa powder and chocolate. Although chocolate as a ritual drink is usually associated with Mexico’s Aztec culture, recent analysis of plant residue points to South America, specifically Ecuador, as the place where cacao originated.

That’s not surprising, says Sonia Zarrillo, a paleoethnobotanist at the University of British Columbia in Canada, because the upper part of the Amazon River watershed in Ecuador and Peru has the largest number of wild cacao species.

That diversity is usually an indicator of the place where a plant originated and where domestication began. Molecular genetic analysis allows scientists like Zarrillo to confirm that by examining ancient DNA in pollen, seeds, and plant residue such as starch grains and microscopic mineral structures called phytoliths gathered from cooking utensils at archaeological sites.

Many well-known crops have their roots in the Amazon Basin, probably because of the tropical region’s great biological diversity. The area where the scientists pinpointed Amazonian maize domestication, in what is now northeastern Bolivia and southwestern Brazil, is especially rich because it is in an “ecotone boundary” — a transitional area between different ecosystems, says Yoshi Maezumi, a tropical paleoecologist at the University of the West Indies in Jamaica, who worked with Kistler on the maize study.

“It’s right on the border where you find the southern edge of the rainforest turning into savannah and grassland,” Maezumi says. “You have a mosaic of different types of landscapes and these areas are really rich for hunting, fishing and gathering.”

When maize arrived, inhabitants of that area were already cultivating rice and manioc, she says. They probably hunted in the nearby forest and fished in the rivers. Traveling by canoe along rivers and streams, they carried seeds and tubers to more distant villages, spreading the plants farther afield.

By finding evidence of early maize domestication in the southwestern Amazon, scientists have solved one puzzle, but their findings raise new questions.

Kistler would like to work backward, using clues from ancient DNA to figure out what the earliest ancestors of modern corn looked like.

Maezumi hopes to explore how other tropical crops became domesticated, and what that can tell her about the people who cultivated them and environmental conditions at the time.

“What we’ve shown is that the process of domestication is more complicated than previously thought,” she says. “New (archaeological) sites are being discovered all the time. There’s so much new information coming out that’s changing the way we think about what humans were doing on the landscape and how they were using the land.”

Editor’s Note: In an earlier version of this story, a photo caption incorrectly stated the location of the University of Warwick, which is in the United Kingdom.