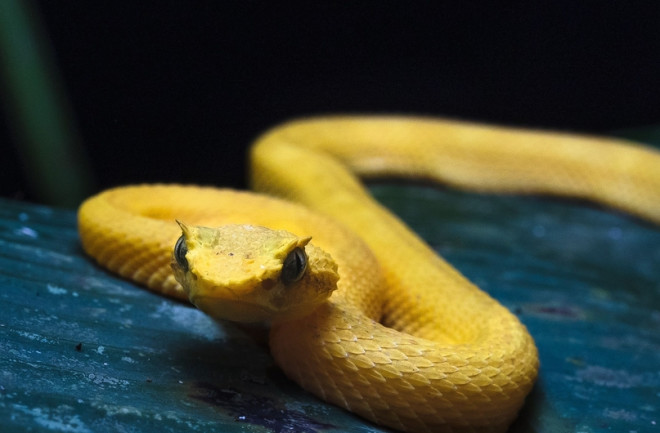 Ilha da Queimada Grande, known colloquially as “Snake Island,” is a jut of oceanic rock that measures some 43 hectares (106 acres), and most people — including decision-makers in the Brazilian government — consider it uncommonly treacherous. This is almost entirely due to its large population of serpent: the golden lancehead.

An old Brazilian story suggests Ilha da Queimada Grande’s snake population is the direct consequence of some inventive pirates’ and their ploy to discourage people from finding their buried loot. However, the real reason for the island’s unique population is somewhat less fantastical.

The golden lancehead is a highly venomous pit viper. And a comprehensive study carried out in 2008 concluded that Ilha da Queimada Grande was likely home to between 2,000 and 4,000 of these vipers. While they are relatively abundant on the island, the fact they only exist here means they are considered critically endangered on the IUCN Red List.

“Island populations tend to be less genetically diverse because they are more likely to go through bottlenecks [low population numbers], which reduce genetic diversity. Genetic diversity is important,” explains Robert Aldridge, a professor of biology at Saint Louis University.

Around 11,000 years ago, during a period known as the Early Holocene, global sea levels rose by around 60 meters as a result of ice masses decaying and coastal ice streams breaking up. This rise caused Ilha da Queimada Grande to separate from mainland Brazil, which meant its snakes went down a different evolutionary path than their continental cousins.

“[The golden lancehead] is an island species that appears most closely related to a mainland form – the [Bothrops jararaca] – and it is now isolated from that species,” explains Stephen P. Mackessy, a professor who specializes in evolution, ecology and toxinology at the University of Northern Colorado’s School of Biological Sciences.

According to Mackessy, because of the small habitat of the island and abundance of birds – which are prey to these snakes – the size, venom and color pattern of the snakes evolved differently.

“If transported to similar islands in the area, it likely would thrive, but it simply has not gotten there,” Mackessy says.

Are the Snakes Deadly to Humans?

Mackessy says the golden lancehead is undoubtedly a threat to the island’s birds – but what about humans?

“Nothing that I have seen suggests that the golden lancehead represents a greater risk to humans than many other species of Bothrops pit vipers – many of which grow considerably larger,” Mackessy says. “The idea that it is exceptionally deadly is most likely a myth.”

There is no official record of a golden lancehead biting a human. But some experts predict that the snake’s hemotoxic venom could cause organ degeneration, a heart attack, muscle paralysis or, in a worst-case scenario, death to a victim.

Felipe Grazziotin, a scientist based at the Instituto Butantan, a Brazilian biologic research facility, thinks that the viper’s venom could impact the human body the same as the genus Bothrops.

“Yes, they are venomous, potentially able to fatally envenomate a human,” adds Mackessy, “but […] with a bit of caution, one could easily navigate even the ‘snakiest’ areas of Snake Island.”

Should Humans Visit the Island?

Even though a trip to the island does not necessarily mean danger, Mackessy doesn’t think tourists should visit anytime soon.

“I don’t really think there is any reason why tourists should be able to access the island,” Mackessy says. The habitat wouldn’t endanger a trained herpetologist, but there could be accidents to the general population, according to Mackessy.

“I extract venom from many snakes, and I have done so for over 35 years without incident, but it is still something I would avoid if there was a viable alternative, because it does involve a level of risk,” says Mackessy.

However, Grazziotin believes that tourism could ultimately play a role in the golden lancehead’s long-term survival.

“A smart way to protect these islands [and animals] would be to involve local people, fostering tourism and the proper knowledge of the amazing biodiversity that we have,” he says.