On These Islands, Animals Call the Shots

Some remote spots around the world are still dominated by fauna, a phenomenon now threatened by human-driven factors like tourism and climate change. 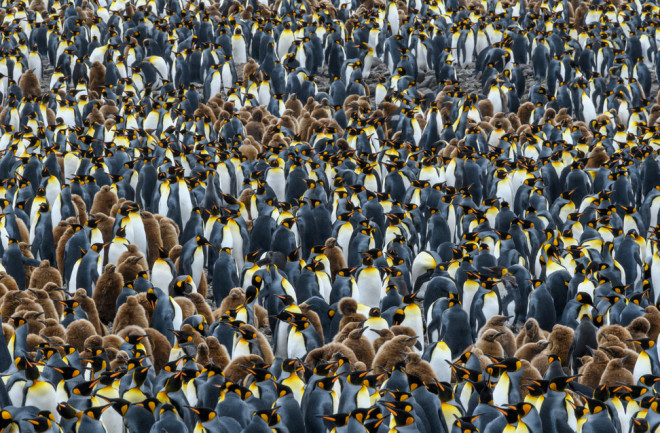 Because of their isolation, islands offer a multitude of ecological opportunities for the creatures capable of reaching them. While many mainland ecosystems are dominated by mammals, islands are environments where insects, reptiles and birds run the show and evolve into fantastical shapes and sizes.

While many of these evolutionary outliers have gone extinct, islands around the world are still home to fascinating creatures like venomous dragons, pint-sized penguins and armies of amorous crabs found nowhere else on earth. But even these remote islands are being threatened by tourists, invasive species and icebergs run amok. Here are six islands still ruled by animals, despite modern-day dangers:

Each fall, the rocky shores of Christmas Island, an Australian territory south of Indonesia, host one of the world’s greatest natural phenomena: the march of tens of millions of scarlet crabs toward the sea. Sparked by the wet season’s first rains and synchronized to the cycle of the moon, these crabs scuttle across the island — sometimes traversing roads with the help of crab bridges — towards the water to breed.

Larger male crabs arrive at the beach first, constructing burrows along the shoreline. Once the females arrive, the crabs breed. Then, after a few weeks, the female crabs reemerge brimming with eggs. Right as the high tide begins to recede before dawn, they gather in teeming masses along the waterline. Each female crab releases roughly 100,000 eggs into the surf.

Reaching the water is essential. While adult red crabs are terrestrial and the size of a softball, their offspring are minuscule and aquatic. Of the billions of larvae, only a few offspring return from the waves. The vast majority are eaten by fish or inhaled by immense whale sharks who congregate around Christmas Island each year to partake in the swirling buffet of crab larvae.

While they’re certainly not flying, swimming pigs are still a sight to see. That's why Big Major Cay, an island in the Exuma region of the Bahamas inhabited by swimming swine (who may have been dumped there by sailors), is a social media sensation and a reality TV destination.

While the feral pigs hog the spotlight, the area is also home to native rock iguanas. These large reptiles with faces adorned in fiery scales may look intimidating, but they are actually humble herbivores. For thousands of years, they have served as crucial ecosystem engineers on these tiny cays as they forage and disperse seeds.

However, the popularity of their charismatic neighbors has resulted in some ill lizards. In addition to swimming with pigs, tourists also enjoy feeding the iguanas who congregate on the white sand beaches in anticipation. A 2013 Conservation Physiology study found that iguanas fed by tourists had higher levels of cholesterol and blood sugar than those eating a natural diet. They were also prone to bouts of diarrhea.

This penchant for unhealthy eating is just one of many factors, along with habitat loss and poaching, driving the decline of Bahamian rock iguanas and threatening the ecosystems that the iguanas help manage.

Like rock iguanas, giant tortoises also act as island ecosystem caretakers. No place on earth better illustrates this than Aldabra Atoll, a collection of coral islands encircling a shallow lagoon in the Indian Ocean. Fringed by jagged coral reefs, the atoll has been left relatively untouched by humans. This makes it prime tortoise territory — more than 150,000 giant tortoises live here, more than the entire tortoise population of the Galapagos Islands.

Weighing up to 550 pounds, these lumbering giants are eating machines. This is good news for the Aldabra ecosystem — as the tortoises gobble up grasses, they maintain a diverse plant community referred to as “tortoise turf.” Like elephants, they even topple over small trees to snack on leaves and fruits. The massive reptiles then disperse the fruit’s seeds in their droppings, replanting the atoll as they plod along.

These titanic tortoises were once fixtures on islands throughout the Indian Ocean. However, hungry sailors and invasive pests ate most of these tortoises to extinction, sending ripples throughout the entire ecosystem. That’s why scientists are now reintroducing Aldabra tortoises to spots where their brethren have disappeared in the hopes that they’ll reinstall ecological order.

Located in a remote stretch of the southern Atlantic Ocean between South America and Antarctica, the mountainous South Georgia Island lacks a permanent human population. But it is packed with wildlife — South Georgia and the neighboring South Sandwich Islands harbor a higher diversity of species than the famed Galapagos Islands, and everything from hulking southern elephant seals to majestic albatross breed there.

The island’s main attraction: the millions of penguins who congregate on the beaches. Four different species of penguins reside there including chinstrap, gentoo and macaroni penguins, who sport tufts of bright yellow feathers. But the king penguin, the world’s second-largest penguin species, rules South Georgia Island. They sport distinct splashes of orange around their faces and produce fluffy, brown chicks. An estimated 400,000 king penguins huddle together en masse at St. Andrews Beach, where ocean meals are just a short waddle away.

While mostly uninhabited today, the island has been utilized by whalers and Antarctic explorers for centuries (explorer Ernest Shackleton is buried there). With the whalers came reindeer — who continue to brave the harsh conditions — and rats, who were finally eradicated in 2018. The island is also vulnerable to the effects of climate change. In 2020, a melting iceberg the size of Delaware threatened to collide with South Georgia. Yet around 100 miles from the island, the iceberg ran out of steam and splintered, sparing this penguin paradise from an icy impact.

Komodo dragons rank among the world’s most fearsome predators — their mouths full of serrated teeth drip with venom. They can measure up to 10 feet long and are adept at tackling large prey like deer and water buffalo. In some cases, other dragons appear on the menu.

Its hunting prowess sometimes gets the Komodo dragon in trouble. The world’s largest lizard ambushes livestock and, in rare situations, will even attack human neighbors, which leads to poaching of the endangered reptiles.

The growing number of tourists visiting the far-flung islands comprising Komodo National Park, which sits in the center of the Indonesian archipelago, has also caused problems for the burly dragons. While they reign supreme over the rugged hillsides and grassy savannas, they are tempted with snacks from tourists, whose presence may also impact dragon breeding schedules. Before the pandemic slowed tourism to a trickle, officials considered closing the national park for an entire year to offer the beleaguered behemoths a respite.

Less than 90 miles south of Melbourne, Phillip Island’s Summerland Peninsula was once a bustling vacation community. But humans were not the area’s only inhabitants — Phillip Island is also home to one of the world’s largest colonies of little blue penguins, the world’s smallest penguin species. The nightly parade of these pint-sized birds from the ocean to their burrows has drawn tourists since 1920.

However, the throngs of penguins began to thin as vacation homes, pets and roadways made the procession increasingly difficult. So Australian officials did something practically unprecedented — they sided with the wildlife. In 1985, the government began a contentious effort to buy back all the property along the peninsula before undertaking an even more ambitious effort to rewild the area.

Over 30 years later, nature has swallowed up the site of the housing development, and the penguin colony has responded by seizing up the open real estate. Today the only residential structures remaining on this side of the island are the wooden boxes that shelter penguin burrows. The island’s other natives have also thrived post-rewilding: Wallabies bound through the thick bush as stout Cape Barren geese munch on grasses, enjoying a scenic vacation spot reclaimed by nature.