There are plenty of snakes out there. But which ones are likely to kill you? 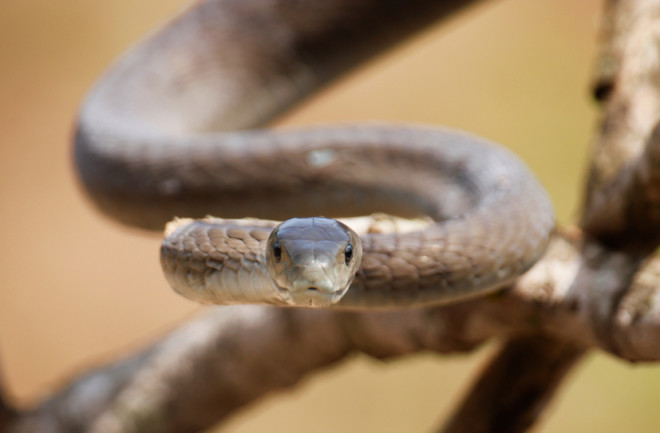 Earth is home to about 3,500 species of snakes, but only 600, or so, are venomous. Still, those snakes that are venomous can kill. (Although, they are not the most common causes of death, like automobile accidents and heart attacks.)

It’s tricky to rank these creatures by their level of danger, if not impossible. There are multiple ways to order them — the potency of their venom; how likely they are to strike; how often humans encounter them — and even experts can’t agree on a top-10 list. However, there are a few snakes that would make any list of dangerous reptiles. Here are 10 serpents you don’t want to mess with.

When people think of deadly snakes, the king cobra is often the one that slithers to mind. It is not only deadly, but also is the longest of the venomous snakes. It can grow up to 18-feet-long, though that’s the extreme. If you happen across one, it’s not likely to be more than 12 feet, or so. Isn’t that reassuring?

These giants eat mostly other snakes, which is a redeeming feature for humans. Though generally not aggressive, they can be mean during the mating season. And you definitely don’t want to sneak up on one. When threatened, they do the classic cobra stance, raising their bodies straight up, spreading their hoods and hissing. If you want to continue to live, you’ll heed this warning.

The black lining of the black mamba’s mouth inspired its name. Its skin ranges from grey to light brown. The black mamba is not quite as long as the king cobra, but it’s faster. It can zip along at more than 12 miles-an-hour — and often uses these bursts of speed to chase anyone who was unlucky, or foolish enough to provoke it. Its venom contains a potent neurotoxin. Just a couple of drops can kill a human. The black mamba is often described as “nervous,” rather than aggressive. The distinction is probably meaningless if you’ve disturbed one.

Despite the charming name, the boomslang delivers a nasty bite. Its venom, a hemotoxin that causes widespread, severe hemorrhaging, can kill quickly and unpleasantly. However, boomslangs aren’t as aggressive and rarely bother anything that’s too big to eat.

This snake is small, usually fewer than three-feet-long. But what it lacks in size, it makes up for in attitude. The saw-scaled viper is bad tempered and has a devastating venom. Researchers say these nocturnal hunters are responsible for more deaths than many other snakes. This is likely because they have such a wide range, living throughout the Middle East and Southeast Asia.

Experts call the inland taipan the most venomous snake on the planet. That may be true, but fortunately, it’s not a major killer of humans. Like most snakes, this one is shy and avoids confrontation if at all possible. It also lives in a remote area of Australia, where people don’t often encounter it.

Also called the Gaboon viper, this snake has the longest fangs of any snake. Fortunately, they don’t often sink those fangs into humans. They prefer to hiss a warning and escape to avoid wasting precious venom. If one does bite you, the amount of trouble you’re in depends on how much venom the snake injected. A lot of venom means you could be dead within minutes, but just a little, and you’ll have a great story to tell.

If your first thought when hearing the words “deadly snake” isn’t the king cobra, it’s likely the rattlesnake. The eastern diamondback rattler can reach up to seven-feet-long. That’s small compared to a cobra, but it’s the largest snake in the United States and one of the largest snakes on the planet. Eastern diamondback venom is powerful, and these snakes have a lot of it. But lucky for us, they’re great at hiding from humans. If they are disturbed, they give plenty of warning — loud hisses and a shake of those namesake rattles.

The Mojave rattlesnake is smaller than its cousin the diamondback, but it has a much stronger venom — 10 times stronger than other North American rattlesnakes — and a bad temper to go with it. Its bite is not as painful as other rattlesnakes, but you still don’t want to get a dose of this powerful neurotoxin.

Like the black mamba, the color of the inside of the cottonmouth moccasin’s mouth inspires its name, not its scales. This snake grows to about four feet and are good swimmers that spend a lot of time in water. When threatened, they make an impressive display. They coil up, open their fanged mouths wide, and hiss aggressively. They don’t often bite humans, but when they do bite, it can kill you, thanks to a strong hemotoxin in their venom.

The olive sea snake is another water-loving serpent. And the snake’s skin does inspire the name. However, these snakes are both friendly, as they often approach divers, and highly venomous — a dangerous combination. They’re more curious than aggressive and rarely bite humans, but when they do, they can have fatal bites.