With the deer population depleted, wolves on a remote Alaskan Island turned to eating sea otters to survive. Now their population is booming. 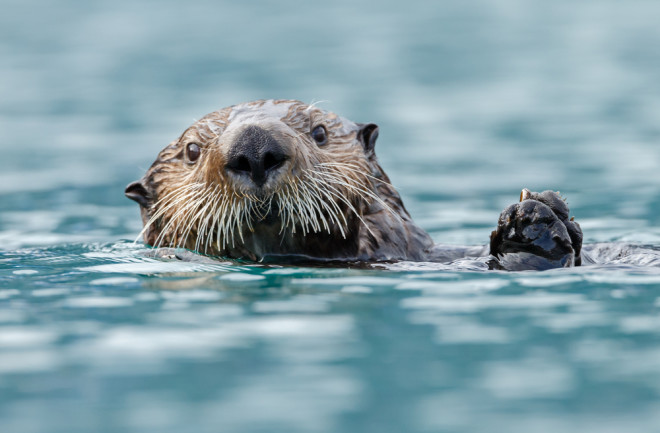 Sea otters are innovative, adorable and apex predators in their ecosystem — until now. On Pleasant Island, a 20 square mile uninhabited island off of Alaska, the deer population has likely dropped due to wolf predation. With the decrease in available prey, it appears that sea otters are now on the menu for wolves.

According to a new study from Oregon State University and the Alaska Department of Fish and Game, this may be the first time sea otters have become the predominant food source for a land-based predator like a wolf.

Researchers analyzed wolf scat and tracked the wolves with GPS collars, finding that in 2015 their diet was 75 percent deer and only 25 percent sea otter. However, by 2017 sea otters made up 57 percent of the wolves’ diet, while deer made up only 7 percent. This stayed the same until 2020, when the study ended.

“Sea otters are this famous predator in the near-shore ecosystem, and wolves are one of the most famous apex predators in terrestrial systems,” says Taal Levi, an associate professor at Oregon State, in a press release. “So, it’s pretty surprising that sea otters have become the most important resource feeding wolves. You have top predators feeding on a top predator."

A History of Wolves and Sea Otters

While this may be the first instance recorded of sea otters becoming prey for land animals, it may have also happened in the past. According to the study, wolves and sea otters may have once lived on Pleasant Island together before fur traders wiped sea otters in this area out during the 19th and 20th centuries.

The wolf population in the area stayed relatively healthy compared to wolves in the lower 48 states. According to the study, this pack of wolves arrived on the island in 2013 after swimming from the mainland.

After passing the Marine Mammal Protection Act in 1972, rehabilitation efforts helped establish a healthy sea otter population in Alaska, which has led wolves and sea otters to interact in the same environment.

Researchers analyzed the wolf pack on Pleasant Island and the adjacent shoreline from 2015 to 2021. Wildlife biologists, like Gretchen Roffler, from the Alaska Department of Fish and Game, collected nearly 700 samples of wolf scat, much of which was along shorelines. They analyzed the samples in Levi’s lab using molecular tools like genotyping and DNA metabarcoding to identify certain wolves and break down their diets.

(Credit:Sean Neilson) Gretchen Roffler, a wildlife research biologist with the Alaska Department of Fish and Game, collecting wolf scat at the Gustavus Forelands in Alaska.

The GPS collars also helped pinpoint where and when wolves were killing sea otters — mostly when the otters were in shallow water or resting on rocks during low tide. According to the press release, Roffler and her team analyzed the GPS collars during three 30-day field seasons since 2021, finding evidence of 28 sea otters killed by wolves.

“The thing that really surprised me is that sea otters became the main prey of wolves on this island,” Roffler says in a press release. “Occasionally eating a sea otter that has washed up on the beach because it died, that is not unusual. But the fact that wolves are eating so many of them indicates it has become a widespread behavior pattern throughout this pack and something that they learned how to do very quickly. According to Roffler, the wolves are actively hunting and killing the sea otters — not just scavenging for the old or dying.

(Credit: Bjorn Dihle) A wolf travelling and foraging in the intertidal zone on Pleasant Island in Alaska.

The Wolves are Adapting

With the depletion of the deer population on the island, Levi thought the wolves would have either died off or left the island. Instead, according to Levi, the wolf pack seems to have grown to a density not previously seen in wolf populations. He believes the wolves consuming sea otters have a central role in this.

Currently, Ellen Dymit, a doctoral student in Levi’s lab, and Roffler, along with their teams, are studying wolf and sea otter interactions in Katmai National Park and Preserve, about 700 miles away from Pleasant Island. Early research indicates that wolves are eating sea otters there as well.

Read More: Viruses Could Cause Wolves to Change Colors