A New Titleholder For Earliest Wine? 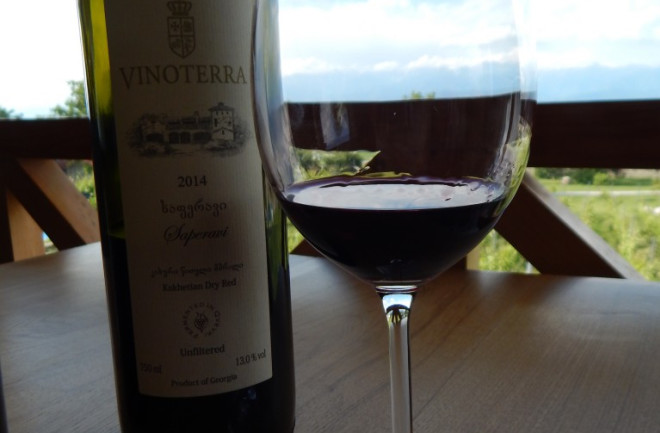 Known for its unusual varietals and millennia-old wine traditions, the Republic of Georgia may also be where viniculture was born. (Credit G. Tarlach) Where are the roots of the earliest wine? Countries in southwestern Asia have long contested who was first to ferment grapes. To date, the oldest widely accepted evidence for viniculture came from the Zagros Mountains of Iran. But now new research from the Republic of Georgia — a perennial and fierce challenger for the title — suggests people in that Southern Caucasus country were sipping the nectar of the gods even earlier. Wine* was all the rage throughout much of the ancient world, but despite widespread use and cultural significance, its origin story has always been a little murky. (*I'm following the European Union's definition of wine as the product of grapes. I know all about rice wine, honey wine, hawthorn wine and so on, but, while tasty and with interesting histories of their own, they're beyond the scope of this post.) Archaeological evidence and, more recently, genetic evidence, have zeroed in on the Near East/southwestern Asia as the most likely region where winemaking began, but the exact spot has proven elusive. It's very possible, of course, that more than one person in more than one settlement, surrounded by wild vines, realized that letting juice from the vines' fruit ferment a bit resulted in a delicious, mind-altering beverage. In fact, the pips of wild grapes have been found at a site near the Sea of Galilee that are about 20,000 years old, suggesting people were enjoying the fruit, and probably its juice, long before it was domesticated. But it's one thing to chew on or squash and drink the juice of wild grapes, quite another to domesticate a crop and develop a method (and then an industry) for producing a fermented beverage from it. Grapes, most of which are used to make wine, are today one of the most valuable crops in the world, and there's prestige to be had from being the cradle of viniculture. Nearly every country in the corner of Asia where grapes were first domesticated (Turkey, Iran, Armenia, Azerbaijan and Georgia) has made a bid for the title of first winemaker. For more than 20 years, the archaeological site of Hajji Firuz Tepe, in the Zagros Mountains of Iran, had arguably the best case for earliest evidence of winemaking. A roughly 7,000-year-old shard from a large vessel had tested positive for tartaric acid, a key residue distinct to the winemaking process, as well as a potential wine preservative derived from tree resin. The Republic of Georgia, however, had staked its own claim for the earliest wine based on similar residues on pottery shards that were about 8,000 years old. The evidence was called into question because of issues with exactly where the material was found (turns out the piece with the highest amount of residue was collected from the surface of the site, rather than a securely dated layer) and the potential for a false positive result based on how shards were handled after excavation. Today, the Georgians (and a few non-Georgian colleagues) are back with new evidence. Wine In The Way, Way Back New excavations at Shulaveris Gora and Gadachrili Gora, two sites south of the capital of Tbilisi, yielded more pottery shards, with some pieces as old as 8,000 years (dates established using both relative and absolute methods, including radiocarbon dating). Chemical analysis showed that several of the shards tested positive for residues associated with winemaking, including tartaric, malic, succinic, and citric acids. Not found, however, were any resins, which were commonly used in ancient viniculture. Also not found: pips or any other solids from the grapes themselves, which you could reasonably expect to find from both from the winemaking process and as contents settled in storage.Still, the chemical profile of the residues points in one direction, and that direction is wine.

A Neolithic jar from Khramis Didi-Gora, Georgia is similar to vessels that tested positive for residues associated with winemaking from other ancient sites in the country. (Courtesy of the Georgian National Museum)I'll Drink To That! The recent digs at both sites are part of a larger push, invested with more than a little national pride, to establish Georgia as the motherland of winemaking. Does that mean we should take today's results with a grain of salt? No, not necessarily. It's just good to know the broader context. The international team behind today's paper, published in PNAS, includes some of the most respected names in the study of early viniculture and their evidence is well-documented. And in their conclusions, the researchers note: "The question might be asked which region has priority in the discovery and dissemination of the 'wine culture'and the domesticated grape. It is impossible to assign priority to any of these regions at this stage in the investigation; much more excavation and the collection of wild grapevines for DNA analysis are needed." I do know that the Georgian people are fiercely proud of their millennia-long viniculture — and that the wines are indeed worth the passion they stir up. Interested in reading more about Georgia's traditional winemaking? Check out a post I wrote last year after visiting the fascinating and beautiful country and yes, sampling more than a few of its scrumptious and unique varietals.

Traditional wine-making in the Republic of Georgia, even today, relies on large, distinctively shaped clay containers called qvevri, which are buried or built into cellars. (Credit G. Tarlach)