A Near-Extinct Blue Butterfly Flourishes Again, Thanks to a Red Ant 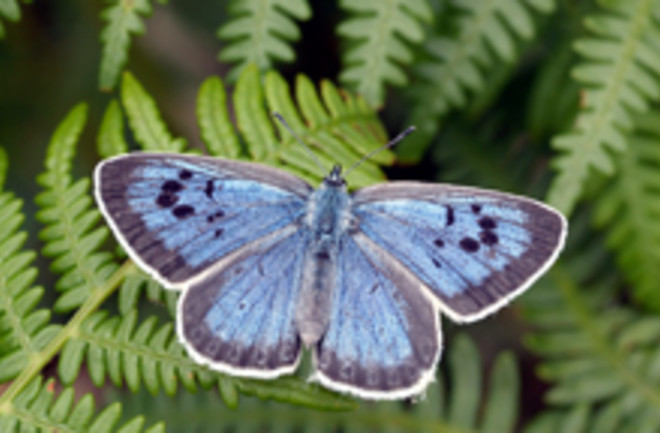 In a rare conservation success, a beautiful butterfly species that was headed for extinction has been brought back from the brink, thanks to careful biological observations of the insect's life cycle.

The mysterious disappearance of the Large Blue Butterfly across most of northern Europe was originally put down to its popularity among insect collectors [Telegraph].

Then biologist Jeremy Thomas spent six summers in the 1970s studying the very last colony of large blue butterflies in the United Kingdom, and determined that the butterflies were dependent on one species of red ant for their survival--and those ants were losing their habitat. The butterflies lay their eggs on flowering thyme plants, and the hatched caterpillars fall to the ground and begin to impersonate immature red ants.

They secrete chemicals and even make noises that make the red ants believe they are wayward grubs. The ants then mistakenly carry the caterpillars to their underground homes and keep looking after them even though the adopted intruders gobble ant grubs for 10 months before forming a chrysalis and flying away as adult butterflies [Reuters].

However, the red ants live in fields where the grass is short enough to let the sun warm the soil.

Historically, rabbits had kept the grass short, but in the mid-1950s rabbit populations were suddenly devastated by the plague-like disease myxomatosis [The Independent].

Farmers had also been gradually halting the practice of grazing their cattle, which allowed pastures to get overgrown. When the grass grew less than one inch taller than usual, the increased shade cooled the soil by more than three degrees Fahrenheit, Thomas found, and the red ants vanished.

"To human beings the change looks like absolutely nothing. But when you are on the scale of insects it makes a huge difference to the micro-habitats where they live," he said [Reuters].

Thomas worked out the ecological pressures on the large blues in the 1970s, but he was to late to save the species in Britain; the last colony there died out in 1979.

But the knowledge to bring it back and keep it was now in place; and in 1983 ... he brought large blue caterpillars from Sweden and released them [The Independent].

Cows were brought in to graze in the reintroduction sites, and both the red ants and the blue butterflies found their niches in the ecosystem again. In a paper that will be published online this week by Science, researchers report that there are now more than 30 colonies of large blue butterflies in the United Kingdom, with an estimated population of about 20,000....