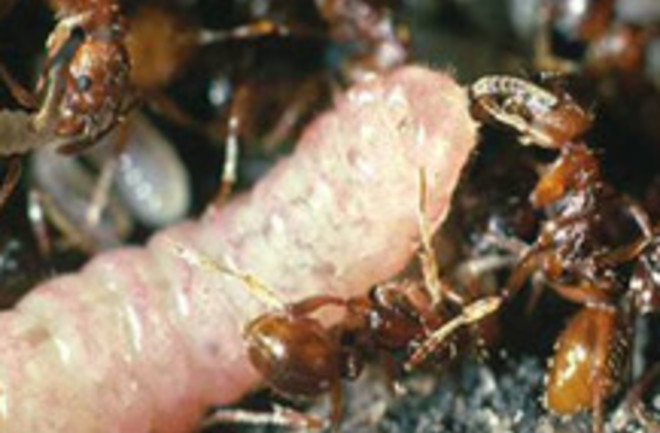 A species of European butterfly has an excellent trick for protecting itself during a vulnerable stage of life. As the caterpillars prepare to enter their inactive pupal stage they emit ant-like chemicals that cause red ants to scoop them up and bring them inside the ant colony. Then, to get star treatment, the caterpillars make a rhythmic noise that resembles the call of the ant queen. That's enough to get the worker ants' undivided attention, a new study shows.

"They appeared to be treating the caterpillars as if they were the holiest of holiest, the pinnacle of power, the queen ant" [New Scientist]

, says lead researcher Jeremy Thomas. If the colony is attacked, the worker ants save the caterpillar before they save ant larvae, and when food is scarce the ants have been known to kill their own larvae and feed them to the deceitful interlopers. But there's one ant who is not fooled. Researchers set up an experiment in which

a butterfly pupa pretending to be an ant queen was placed in a chamber with worker ants and four real ant queens. The ant queens began to attack and bite the caterpillar, but the workers intervened, biting and stinging their own queens, which they then pulled to a far corner of the chamber while other workers attended the pupa [AP].

Researchers note that this situation would not arise in the wild, where queens and larvae inhabit different chambers, but say it shows where the workers' loyalty lies. The caterpillar, of the species Maculinea rebeli, makes the noise by rubbing a scraper on its abdomen against a grooved surface on its lower body. Ants have a similar way of sounding off, Thomas says:

“It’s rather like strumming a guitar.” In a quiet room of ants, he can just manage to hear “quite a scratchy sound,” he says [Science News].

Thomas adds that ants' chemical signaling system is so advanced that few researchers have investigated whether they communicate with sound as well. For the study, published in Science [subscription required], researchers used minuscule microphones to pick up the sounds made by worker ants, queen ants, and the parasitic caterpillars, and then played the sounds back to a group of worker ants with tiny speakers.

When they listened to their own songs, the workers perked up. "Instead of running away or acting with aggression, the speakers attracted the worker ants to them and they tapped them with their antennae with great interest," says Thomas. The recording of a queen's song inspired even more interest. Workers surrounded the speaker and refused to budge. Amazingly, Thomas' team observed nearly the same behaviour when they played the butterfly songs to the ants [New Scientist].