A burst of DNA duplication in the ancestor of humans, chimps and gorillas

This is the sixth of eight posts on evolutionary research to celebrate Darwin's bicentennial.

Physically, we are incredibly different from our ape cousins but genetically, it's a different story. We famously share more than 98% of our DNA with chimpanzees, our closest living relatives. Our proteins are virtually identical and our chromosomes have more or less the same structure. At the level of the nucleotide (the "letters" that build strands of DNA), little has happened during ape evolution. These letters have been changing at a considerably slower rate than in our relatives than in other groups of mammals.

But at the level of the gene, things are very different. Entire parts of the genome can be duplicated or deleted and the rate at which this happens has actually accelerated in the primate lineage. Some families of genes (including many that play important roles in the brain) have expanded and contracted with remarkable speed.

Duplication provides raw fuel for rapid evolution by creating back-up copies of parts of the genome. If mutations with harmful effects crop up in one of these copies, there's always a spare kicking around to take up the slack. So duplicated segments of the genome become relatively free to pick up new mutations and unsurprisingly, they are often very dynamic places that change with incredible speed.

Today, they make up about 5% of the human genome and have probably been a major driving force in the ape evolution. Now, Tomas Marques-Bonet from the University of Washington has reconstructed the evolutionary history of these duplications by comparing them across the genomes of four primates - humans, chimpanzees, orang-utans and macaques.

Using computer programmes, he produced a "comparative map" that revealed duplications unique to each of these four genomes, along with those that are shared between them. The map showed that about a third of the duplications in the human genome are unique to us, and most of the remaining duplications are ones we share with chimps.

The rate at which these duplications cropped up had greatly accelerated in the part of the primate family tree that includes humans and the African great apes. These rates doubled and hit their peak in the last common ancestor of ourselves and chimpanzees. As a result, both chimps and humans have far more of these doubles than either orang-utans or macaques. This burst of activity coincided with a time when other types of mutation, such as changes to single nucleotides, were slowing down. Marques-Bonet thinks that these accelerated rates of gene duplication played a pivotal role in the success and evolution of the great apes.

No one know why this burst of duplication happened, especially since in most cases, duplicating large chunks of the genome must have some pretty negative effects. But Evan Eichler, the head of Marques-Bonet's group, has some ideas. For example, he suggests that the ancestral ape may have hit a population bottleneck. It's easier for harmful genetic changes to persist In smaller populations where they are less frequently exposed to the purifying force of natural selection.

Alternatively, it's possible that this ancient ape developed a mutation that destabilised its genome and made subsequent mutations more likely - a so-called "mutator phenotype". That's certainly a reasonable idea, and it's backed up by the fact that the very presence of gene duplications seems to make further duplications even more likely. Marques-Bonet's map shows that they didn't crop up in random locations. For example, almost half of the duplications that we share with chimps are very close to duplications that we share three ways with chimps and orang-utans.

Many of the duplicated pieces of DNA contain actual genes; the human-specific duplications, for example, included at least fifty-six. Many have been linked to human adaptations in the past, and while chimps share the same genes, Marques-Bonet's analysis showed that we have more copies than they do.

Duplications that are shared between all four primates include several genes involved in breaking down amino acids. Those that are unique to the different species are very different; they include genes with roles in nerve cell activity, muscle contraction and chemical communication between cells. So not only has the rate of duplication sped up in the ape dynasty, but the types of genes that have been copied have shifted too.

The importance of these sequences becomes obvious when their numbers change. Today, further doublings or deletions at certain "duplication hotspots" have been associated with mental and developmental disorders, including autism, schizophrenia and retardation. Evan Eichler, who leads the group Marques-Bonet works in, said, "The genes responsible for these [conditions] have not yet been mapped, but one possibility may be the rapidly evolving genes that are embedded within the duplications."

The map has thrown up a few big puzzles too. For a start, some regions were duplicated extensively in other apes but never copied in humans. One region, on the ape equivalent of our tenth chromosome (green circle in the image below), has been duplicated up to 100 times in the chimp, gorilla and bonobo genomes (red arrows). In ours, there's just the one copy. This pervasive sequence turns up in very different locations in the various apes - a clear sign that it has been copied independently in each species. Its location even appears to be changing in modern gorillas. When Marques-Bonet looked for it in four living gorillas, he found that half of the locations in any individual were unique.

Why this sequence took off so spectacularly in other apes but failed to do so in humans is a mystery. Eichler suggests that these regions are "simply unstable and dynamic". Once the original sequence copied itself, it greatly increased the odds of further duplications. It was by chance that this "initial cascading event" never happened in humans. 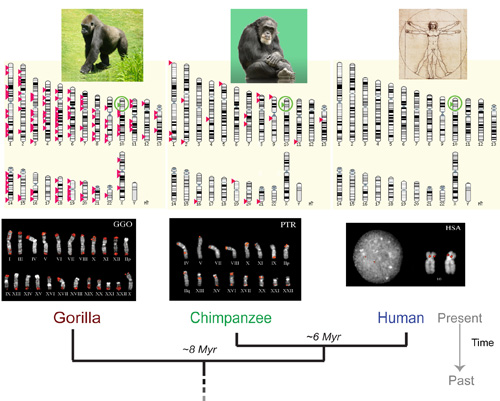 Marques-Bonet admits that his map has a few potential flaws. It obviously relied heavily on the software used to construct it, but he managed to show that this was reliable enough by using glowing moleculesdesigned to stick to specific DNA sequences. These confirmed that the map predicted duplicated sequences with an accuracy of about 87-99%.

The map was also based on the genome of one individual per animal and it isn't clear how representative these single specimens are of their respective species. For example, the exact number of copies of each duplicated region could vary considerably from one individual to another. Further analysis showed that this was true, but it didn't change the fact that some regions were consistently duplicated across individuals and others were not.

As an example, Marques-Bonet compared duplications in James Watson's genome to the reference human sequence (a mix of samples from several people). The two genomes shared 89% of their duplicated regions. So whether a specific area of DNA is duplicated or not is fairly constant across members of a single species - it's just the number of copies that changes.

There is another caveat - two species may have duplicated the same parts of their genomes independently. That would make it look like the duplication happened in their shared ancestor, even though the two lineages converged on the same mutations of their own accord.

To account for that, Marques-Bonet focused on 103 different duplications that we share with chimps. In the two genomes, he found that 85% of these duplications have multiple copies that are found in the same spots. It's very unlikely that they are independent innovations - our last common ancestor with chimps almost certainly had these copies already.

Potential problems aside, the comparative map has already revealed tantalising bits and pieces about gene duplications, what they do, and the part they played in human and ape evolution.Even better, it provides raw material for scientists to test more ideas about these sequences in the future.