These domestic destinations hold some of the most unique geological features in the world. 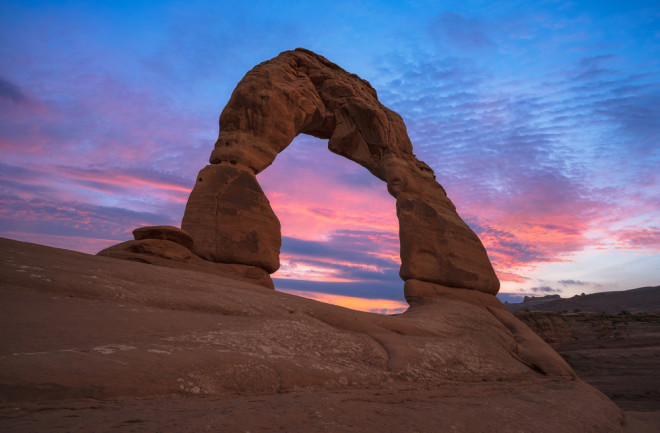 Happy National Park Week! With a diversity of photo-worthy environs including high deserts, rainforests, mountains, beaches and historical sites, there’s a National Park or monument for everyone. In honor of the holiday, here's a list of some of the striking features that you can find throughout the country:

If you’re heading to Utah to check out the Mighty Five, chances are Arches National Park is at the top of your list — along with Zion, Bryce Canyon, Canyonlands and Capitol Reef. This park was aptly named for its more than 2,000 arches, the largest concentration in the world. These landmarks formed from millions of years' worth of seismic activity as the area shifted, wrinkled and expanded, leaving exposed sandstone to spread to the surface. Water eventually began eroding the sandstone into fins, or narrow, thin rock faces. Then, water seeped into the cracks of the fins and froze and expanded, which caused chunks of sandstone to fall out and form a window. Water and wind continued to erode the window until it became an arch. w

Among the park's best-known arches are the Delicate Arch, which is depicted on the Utah license plate, and the Landscape Arch — the largest of them all. Landscape Arch stretches 306 feet across, or about the length of a football field. In 1991, hikers heard cracking and popping noises from the arch and suddenly a slab of rock, about 60 feet long, broke away and crashed to the ground below. A photo and a video of the event were recorded, and no one was hurt.

If you decide to visit, be sure to bring plenty of sunscreen and water (there is little shade available) and check for timed ticket entry between April and October.

Petrified Forest certainly has a startling ring to it. Not to mention, Petrified Forest National Park isn’t actually a forest — at least not anymore. And it’s not necessarily a dangerous place … as long as you don’t steal the stones.

Nearly 200 million years ago, coniferous trees such as pines grew in this lowland area of what is now Arizona, though the climate was more tropical at the time. Fallen trees, some 9 feet in diameter and around 200 feet tall, were covered in sediments as nearby rivers flooded from storms. Over time, multiple volcanic eruptions layered the area in volcanic ash, rich with silica.

The burial of these trees happened so quickly (by geological standards) that the wood evaded decay normally caused by insects and oxygen. As the groundwater mixed with the volcanic ash and silica, it layered over the wood and turned the organic material into stone, also known as petrification.

The resulting fossils are a beautiful menagerie of reds, yellows, oranges and whites. They somewhat resemble precious stones, which makes them an enticing souvenir. But as with all National Park lands, visitors aren't allowed to take anything from the site, including rocks, plants and animals. And for good reason, since removing any of these items can harm the local ecosystem or degrade the geological features.

Legend has it that taking a rock from Petrified Forest National Park can bring about miserable luck. In fact, the park receives envelopes full of returned rocks each year, often with letters begging for forgiveness for fossil theft and hoping their bad luck subsides. Some letters simply state, “You were right!” and some have detailed the years of misfortune that befell the burglar. These correspondences were even turned into a book. When visiting Petrified Forest National Park (or any park) remember to take only pictures and leave only footprints.

Yellowstone National Park was the first-ever National Park, established in 1872 (happy 150th anniversary!). With scenic mountains and rivers and an abundance of wildlife, Yellowstone is also home to more than 10,000 hydrothermal features. These include hot springs, mudpots, and over 500 geysers formed from the 2.1 million-year-old supervolcano hiding below Yellowstone's surface. Geysers erupt when heated groundwater makes its way up the “plumbing” or underground tubing in the Earth’s crust. As the pressure builds towards the surface, the water emerges as steam.

Visitors from all over the world flock to Yellowstone National Park for its geysers — especially Old Faithful. Though Old Faithful is the most well-known geyser, the largest is Steamboat Geyser, which can launch water and steam more than 300 feet into the air. Over 500 of them dot the park, but not all are active at once. That’s why it’s important to watch your step and stay on marked trails and boardwalks, since you never know when one is going to blow.

Nestled beneath the hills of Kentucky are the long and winding passages of Mammoth Cave. With tunnels stretching over 420 miles, Mammoth Cave is the world’s largest cave system (that we know of). Nearly 10 million years ago, water began to swirl its way through the limestone bed, eventually shaping the cave's massive tunnels.

Inside the cave are the classic stalactites and stalagmites, but you’ll also find flowstones, cave popcorn and other unique formations. Flowstones resemble massive calcified curtains that hang from the ceiling, forming from calcium carbonate that has dripped down the walls in water. One of the largest flowstone formations looks similar to a frozen waterfall and is dubbed Frozen Niagra. You can also spot the cave "popcorn" that forms from water seeping through the pores in limestone.

The caves have witnessed plenty of history. They were home to Indigenous people between 5,000 and 2,000 B.C., and reached by European explorers by the late 1790s. Later on, the caves served as a tourist destination and tuberculosis hospital and were the center of several conflicts. These included the Kentucky Cave Wars, in which several tour companies competed against each other to get more tourist dollars. It was until 1941 that Mammoth Cave became a national park. Now, it’s a great area to explore. You can traverse miles worth of tunnels via tour where you may encounter bats and underground rivers.

In the upper-right corner of Wyoming stands a lonely rock. But upon closer look, this tower actually comprises a cluster of rock tubes in the form of columnar jointing. The prevailing hypothesis on the origins of this unique igneous rock formation: Devil’s Tower once constituted the inside of a volcano. Eventually, the softer outside rock of the eroded, leaving only the harder igneous rock behind.

Among the Indigenous peoples of the Northern Plains, including the Arapahoe, Cheyenne and Crow tribes, Devil’s Tower is highly sacred. Each community passes down stories of its creation, which typically include someone fleeing a big bear and finding refuge atop the rock. The intricate tubing or columnar jointing is said to have been created by the claws of this bear trying to reach the people above.