5 Breathtaking Wonders of the Sky

From the Northern Lights to fire rainbows, these dramatic sky events are a sight to behold. 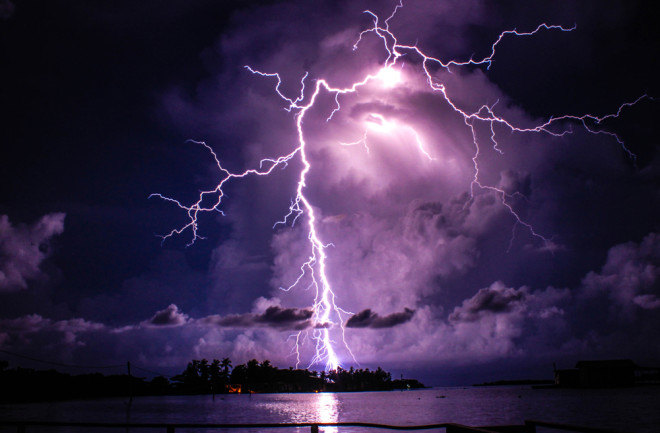 We look to the sky for many incredible wonders, including eclipses, rainbows and stars. Certainly some sky events are more dramatic and unusual than others.  Here are five that are breathtaking.

Also known as the “everlasting storm,” Catatumbo lightning strikes more than 28 times each minute over Lake Maracaibo in northern Venezuela. This phenomenon is unusual because it happens up to 160 nights a year in the same place, lasting for about 10 hours at a time. It also creates an enormous amount of energy — enough to power 100 million light bulbs — and can be seen as far away as 200 miles. For centuries, it aided navigators as they traveled to different Venezuelan port cities. Cataumbo lightning is not different from other lightning in the way it’s formed.

Although there’s a myth that Catatumbo lightning doesn’t produce thunder, that isn’t true. All lightning causes thunder, but it’s not usually audible from more than 15 miles away. The simple explanation is that if people aren’t close enough, they won’t be able to hear it.

Light pillars are caused by light reflecting off of ice crystals. The crystals act like mirrors to reflect a variety of light sources. The source of the light can be the Sun, the Moon, fire, streetlamps, and other natural and manmade sources. Commonly found in Arctic regions due to the extreme cold, they’ve appeared elsewhere — including the northern United States — and in a variety of colors. Not only must conditions be extremely cold for light pillars to form, but the air must also be calm. And although there’s no established specific criteria, the associated temperature at ground level is usually less than 10 degrees Fahrenheit. This incredible wonder of nature has been mistaken for UFOs. They frequently occur over Niagara Falls, and when they do, the number of UFO reports increase.

The Northern Lights occur when particles from the sun collide with Earth’s upper atmosphere at staggering speeds of up to 45 mph, and the Earth’s magnetic field directs the particles toward the North Pole. This creates breathtaking waves of colorful lights. Mentions of this phenomenon can be found throughout history, even dating back to ancient times. The best places to witness the Northern Lights are Iceland, Finland, Sweden, Alaska, Canada and certain areas of Norway. In the early 1600s, Galileo named it “aurora borealis,” for the Roman goddess of dawn, Aurora, and Boreas, the Greek god of the north wind. Check out this stunning, time-lapse video of the aurora borealis over northern Norway.

Scientists tried to figure out the perplexing cause of volcanic electricity for years and discovered two reasons. The first is static electricity, which occurs when particles have friction with each other within ash clouds near ground level. The other explanation is that ice crystals near the astrosphere release lightning bolts. Volcanic lightning only forms in a volcanic plume, the cylinder-shaped column of volcanic ash emitted by some erupting volcanoes. Some volcanos, including several in Hawaii, spew out lava rather than plumes and are therefore unlikely to have lightning. Check out these spectacular images from an erupting volcano with lightning.

Fire rainbows, though a stunning phenomenon, are neither rainbows nor related to fire. The scientific name is a circumhorizontal arc. Their beautiful colors form when the sun is at a higher elevation than 58 degrees, causing light to be refracted through the ice crystals in cirrus clouds. When light enters vertically and exits horizontally, the shift causes a separation of spectral colors. Because weather conditions must be very precise for a fire rainbow to form, they are most common in the United States. For example, Los Angeles has many days where the sun is high enough to produce a fire rainbow. Although these events are technically arcs, conditions are usually such that we can only see a portion of it — not the entire arc (which are very large). Check out this video about a fire rainbow over Orlando, Fla.