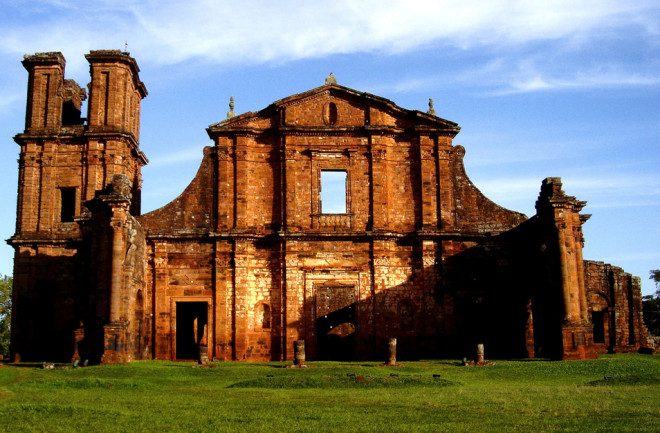 Jesuit church ruins from the 17th century, like the São Miguel das Missões, were built with clay bricks that contain magnetite, which realigned with earth's magnetic field when it was fired in kilns. (Credit: Wikimedia Commons)  It seems safe to say that the laborers firing clay pavers, bricks and tiles to build the Jesuit mission of Santo Ângelo over 300 years ago had no idea that their toils might someday bear relevance to spacecraft orbiting 600 miles above what is now southern Brazil. As the bricks and pavers were fired in kilns, magnetite in the clay abandoned its inherent magnetic properties and realigned in response to the magnetic forces exerted by the earth itself. The point at which this occurs – 580 degrees Celsius, in the case of magnetite – is known as the Curie point. After these building materials cooled and were stacked to form a church, school and other buildings at Santo Ângelo, the magnetite inside retained this reshuffled alignment, a record of the magnetic past sealed away like a proverbial mosquito in amber. Along with several dozen other Jesuit missions built in the same era, Santo Ângelo flourished briefly along what was then the poorly defined border between the Spanish and Portuguese colonies in South America. At its height, the mission was home to about 8,000 people, nearly all of them indigenous Guarani whom the Jesuits were trying to Christianize.

It was a short-lived project. In the 1750s, Santo Ângelo was destroyed in a war between the Guarani and a joint Spanish-Portuguese army, its ruins were later buried and covered over by a modern city built on the same site. Through it all, the smashed bricks – some of them since excavated and cataloged by archeologists – held onto the magnetic information recorded centuries earlier in the kiln. They remained unexamined until very recently, when a few samples found their way to a laboratory at the University of Sao Paulo. There, a team of researchers led by geophysicist Wilbor Poletti analyzed bits of paver, brick and roof tile from Santo Ângelo and two other ruined missions in the Brazilian state of Rio Grande do Sul: São Luiz Gonzaga and São Joao Batista. By carefully measuring the magnetic properties of these samples during repeated cycles of heating and cooling and then controlling for statistical variables – a process totaling around 100 hours in the laboratory – Poletti and his colleagues measured the local intensity of the earth’s magnetic field when the ceramics were fired in the late 17^th century. The research, recently published in Earth and Planetary Science Letters, represents the first archeomagnetic survey undertaken in the region, and suggests that current models of earth’s dynamic magnetic field need refining.

“We found a higher intensity [in the fragments] than would be recorded there today,” says Poletti, a doctoral candidate at the University of São Paulo That’s entirely expected, as scientists have documented a steady drop in the intensity of the earth’s magnetic field since German physicist and mathematician Carl Friedrich Gauss took the first accurate measurements in the 1830s. Poletti was surprised, however, that the intensities recorded at the Jesuit missions in southern Brazil were lower than what’s been shown by archeomagnetic analysis on ceramics produced during the same period elsewhere in Brazil.

While it’s a preliminary finding, it suggests that the South Atlantic Anomaly (SAA) – a large and growing weak spot in the earth’s magnetic field centered roughly over southern Brazil – may have arrived over South America centuries earlier than was previously thought. “We think it may have reached this region around 1600, meaning it grew earlier than people had predicted,” Poletti said. “But that’s a hypothesis. We have to investigate it further.”

The SAA (also known as the South Atlantic Magnetic Anomaly, or SAMA) is thought to have developed above Southern Africa within the past millennium and begun spreading west across the South Atlantic Ocean in the centuries since. According to current modeling, this weak area reached eastern South America in the 19^th century and has continued to grow. It now extends from the Pacific Ocean off the Chilean coast across South America and the Atlantic Ocean to the southwestern coast of Africa. Today, the SAA presents problems for orbiting satellites and other spacecraft, which are exposed to higher-than-normal radiation when they pass through the region. Because the earth’s magnetic shield is weaker here, radiation penetrates deeper into the atmosphere. This region has been linked to crashing laptops on the space shuttle, damage to the Hubble space telescope and satellite failures, including this year’s loss of the state-of-the-art Japanese observatory satellite Hitomi. That adds significant practical implications to understanding the development and future behavior of the SAA. While the reasons behind the appearance and spread of this weak spot in the earth’s magnetic field have yet to be fully understood, the phenomenon may be linked to the periodic magnetic reversals that the earth undergoes. “This could actually be the start of our [magnetic] field flipping,” says Alexa Halford, a NASA scientist based at the Goddard Space Flight Center.

Because the SAA was only discovered in 1958, our understanding of its historical development relies heavily on modeling and the relatively sparse archeomagnetic data like that recently recorded by Poletti’s team. Over 90 percent of the archeomagnetic sampling that informs these models was conducted in the Northern Hemisphere, Poletti said. That gives him extra incentive to continue his work in Brazil and help build a more comprehensive set of global data to refine the models of earth’s changing magnetic field. “Understanding this entire process [of geomagnetic reversal] may not seem like it’s important for tomorrow or 10 years for now, but understanding how it’s changing will give us a way to prepare for the future,’ Halford added. “If it continues to grow in size and decrease in value, my gosh, this is a serious issue [for spaceflight],” says John Geissman, professor of geosciences at the University of Texas at Dallas. Poletti’s future research plans include an archeomagnetic survey over the past 3,000 years in the Amazon basin. It’s a region ripe for such work because it’s full of ceramic fragments – a legacy of its long history of human occupation – that have never been scrutinized for clues about the earth’s magnetic past. Poletti has also using a worldwide database of past archeomagnetic studies to further investigate the suggestion, gleaned from the ruined Jesuit missions of southern Brazil, that the SAA was bigger in centuries past than we’d thought. “If this works out, we’ll understand variations in the magnetic field [in the Amazon] over the last 3,000 years … [and] better understand the development of the SAA and its influence on the global magnetic field,” he said.