12 Photos That Reveal Nature In All Its Glory

These award-winning photographs capture jaw-dropping views of our natural world. 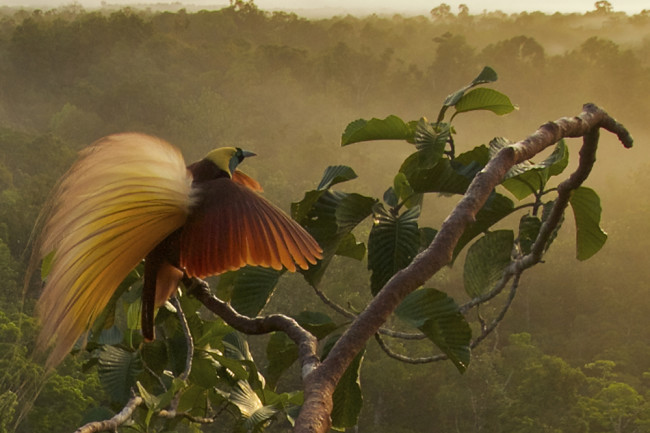 The Natural History Museum of London's Wildlife Photographer of the Year is one of the most prestigious photography events in the world with more than 42,000 entries flowing in from 96 different countries.

In its 50th year, the winners once again succeeded in bringing the Earth's most beautiful landscapes and animals into focus. The year's 100 award-winning images are now traveling the globe, and will be opening at the Houston Museum of Natural Science later this month.

But lucky for you, you can see our favorites from the comfort of home. 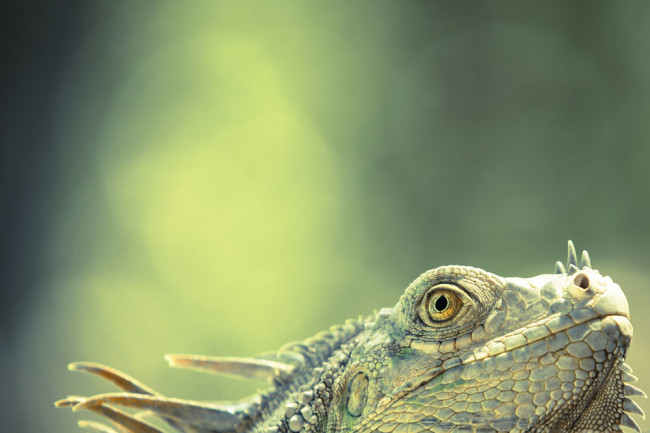 While on vacation with his family in Tamarindo, Costa Rica, Will Jenkins snapped this photo of a green iguana that had jumped down from the hotel roof.

Iguanas are very common throughout the Caribbean Islands — so much so they're falling off roofs. 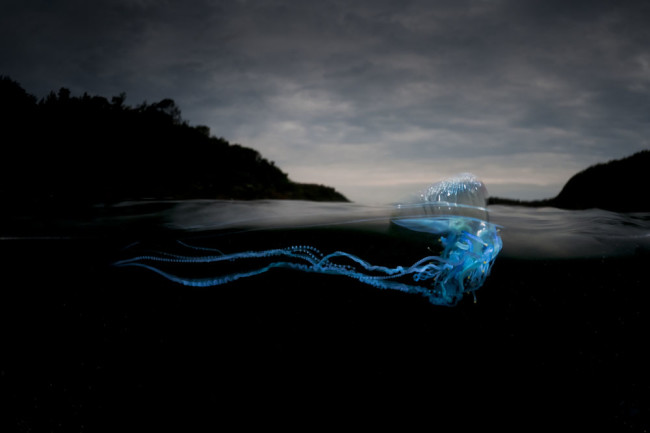 This is singlePortugese man-of-war, but you're actually looking at four different organisms right now.

Despite its singular appearance, the man-of-war isn't a jellyfish; rather, it's a siphonophore, which is a colony of organisms that are dependent on each other for survival.

Photographer Matthew Smith caught this particular colony floating near the coast of New South Wales, Australia. Thousands of men-of-war are carried toward the shores during strong winds. 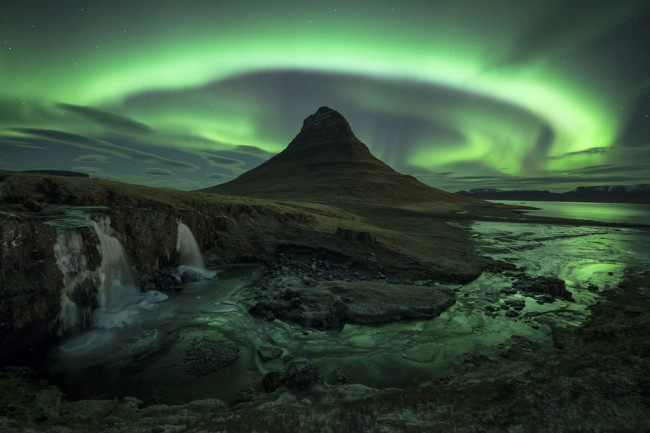 Mt. Kirkjufell in Iceland is certainly a mouthful to pronounce, but not to worry — the scenery will leave you speechless.

Photographer David Clapp set up his camera at his planned viewpoint to capture the auroras encircling Kirkjufell. At 2 a.m. the activity in the sky increased, and the auroras suddenly formed a halo of sorts around the peak of the mountain. 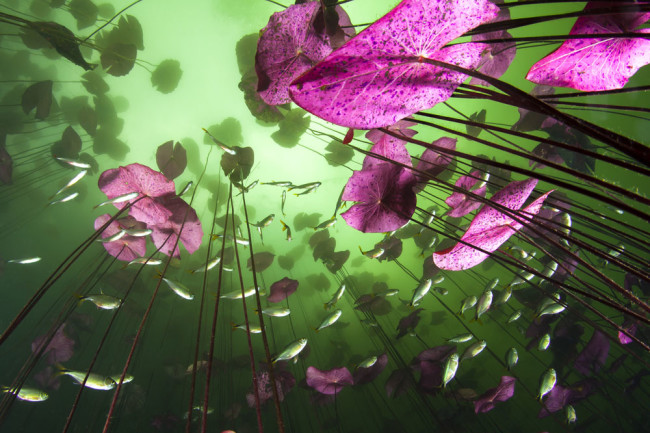 Water lilies reach for the filtered sunlight shining to the depths of a sinkhole in the Aktun Ha cenote on Mexico's Yucatan Peninsula.

Photographer Christian Vizl has been photographing this subterranean landscape for more than a decade. The water is crystal clear most of the year, which allows vast underwater gardens to flourish.

However, in summer, when this photo was taken, algae blooms turn the water a murky green. 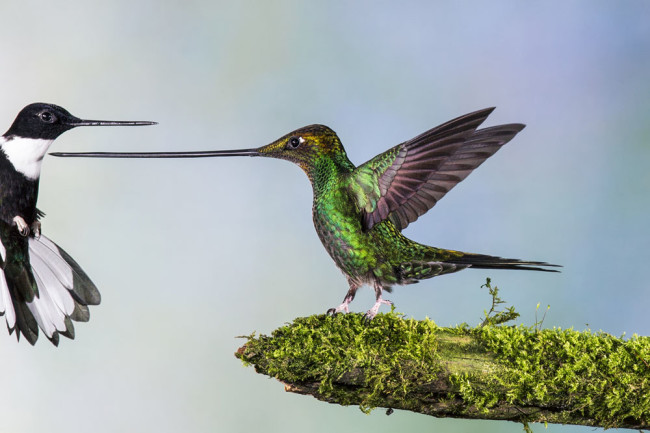 On the right, a sword-billed hummingbird proves its beak is for more than just feasting on nectar while standing its ground on a mossy perch. Photographer Jans van der Greef noticed bouts like these occurring routinely outside his lodge during a trip to Papllacata, Ecuador.

You see, the sword-billed hummingbird's path to its favorite flowers and feeders crossed into the turf of the fiercely territorial collared inca hummingbird. These brief, but intense, battles occurred a few times a day, and van der Greef captured this particular spat on camera.

Fun fact: The sword-billed hummingbird is the only bird with a bill longer than its body — and it knows how to use it. 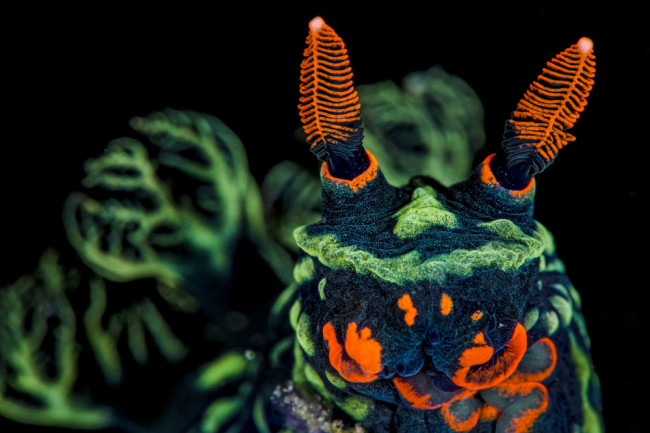 While this neon nudibranch looks large as life, it's actually less than 2 centimeters long.

What the nudibranch lacks in size, it makes up in flare. Its vibrant colors scream, "Do not eat me!" And it's an honest warning: the nudibranch incorporates chemicals from the skin of its primary prey, sea squirts, into a foul-tasting mucus that predators deplore. 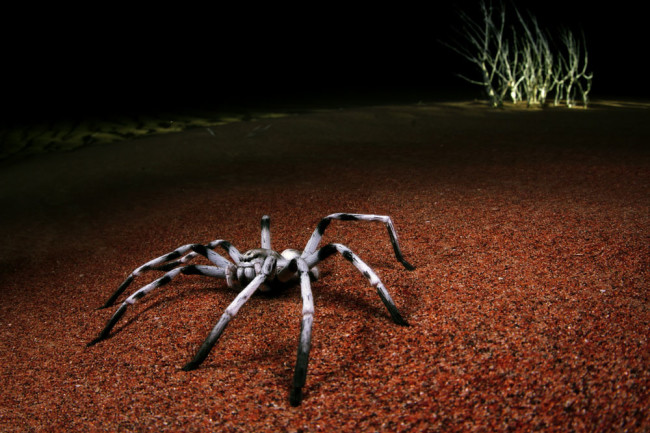 Huntsman spiders have terrible eyesight, but they make up for it with their adept sense of vibration. When the critter felt the rumbling of González de Rueda's steps, it didn't hesitate to go on the offensive. The 3-inch-wide spider jumped onto his boot to defend itself.

Fortunately, González de Rueda had nerves of steel and decided to snap a photograph. 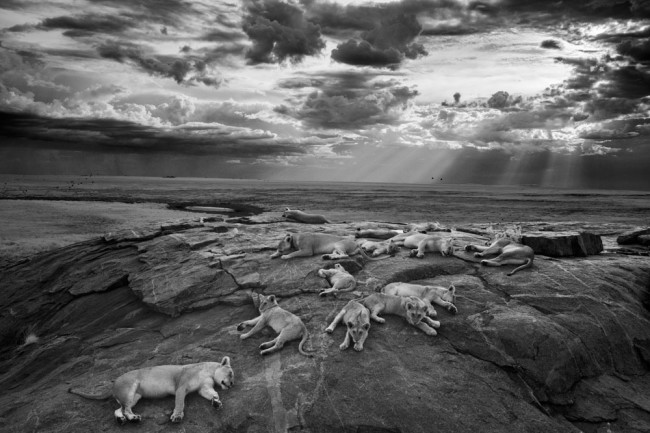 You're looking at the overall winner of the 2014 Wildlife Photographer of the Year, and it's easy to see why.

Shortly after driving off two males from the pride, the females settled down for a nap on a rock ledge overlooking Serengeti National Park in Tanzania. Photographer Michael Nichols set out to create an image that conveyed the glory of lions — long before they were a threatened species. Nichols followed the lions for six months prior to taking the photo, so they were used to his presence. 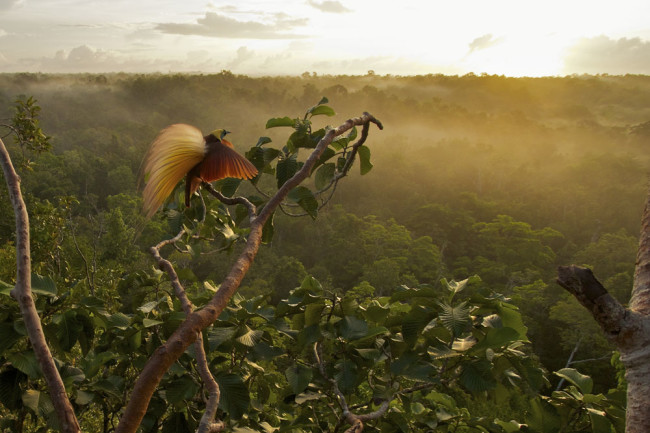 A male bird of paradise rises to the highest branches to greet the morning sun in the rainforest in Wokam Island, Indonesia.

As mist arose in the distance, Tim Laman climbed to the treetops to catch this bird fluffing and fanning its wings. Laman says this image is his most treasured in 10 years of photographing the magnificent birds. 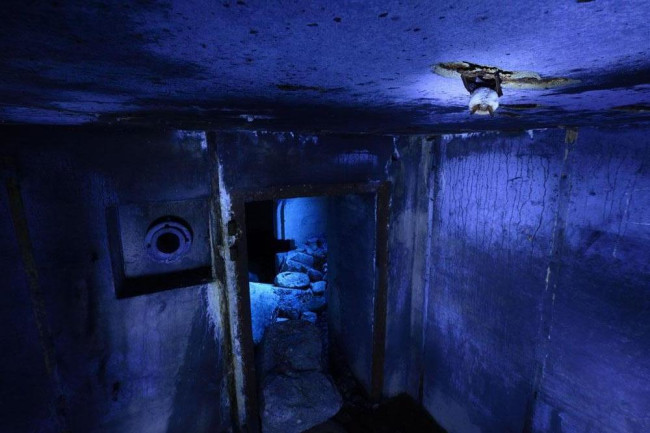 It's been a long time since soldiers patrolled the World War II bunkers in the Puszcza Piska Forest in Poland, but that doesn't necessarily mean they're abandoned.

On a freezing winter night, Łukasz Bożycki found three of these bunkers while studying overwintering bats. The weather outside was subzero, so the bunkers offered a bit of warmth — just above zero. While working in a bunker, Bożycki spotted a Daubenton's bat in complete hibernation mode. When hibernating, these bats take just one breath every 90 minutes. 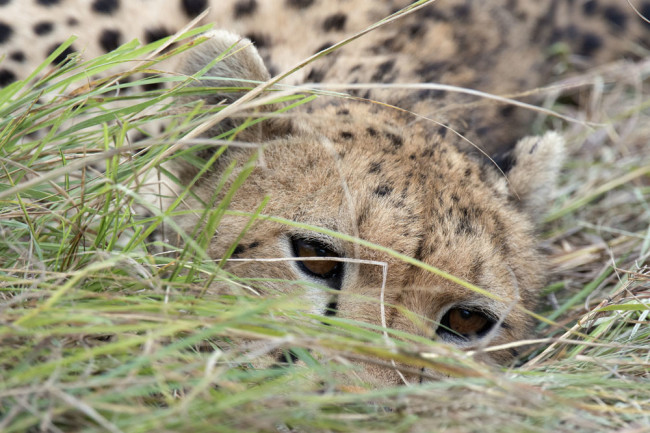 Ten-year-old photographer Leon Petrinos, on his first safari through the Maasai Mara National Reserve in Kenya, caught the gaze of a cheetah who had just finished eating an impala.

Although content, this cheetah mother was still on high alert since she had a cub nearby and her kill could attract other predators.

Petrinos said he had honed his skills with a telephoto lens by photographing his dog, Scooby, fetching balls. 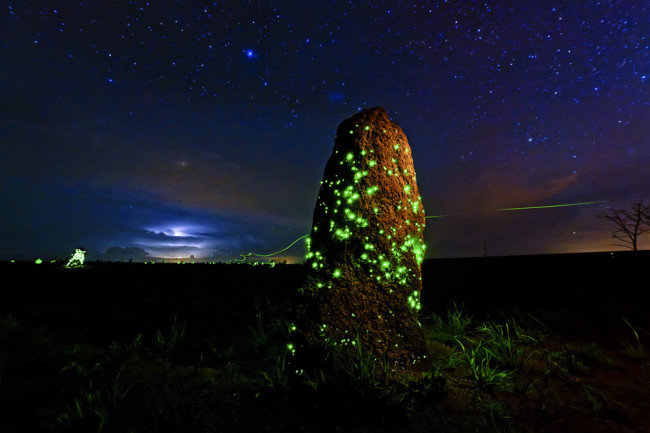 When night falls on the savannah of Emas National Park in Brazil, things start to take on an alien glow.

You're actually seeing click beetle larvae living in the outermost layers of termite mounds. When they get hungry, they emerge, glowing, from their burrows to feast on termites that are coming and going.

This performance only happens when conditions are right: just a few weeks after the rainy season. To get this shot, photographer Ary Bassous went out during the night, lit the mound with a flashlight and left the shutter open for 30 seconds.