You Fall in Love Because Your Brain is a Jellyfish, Lizard, and Mouse Ice Cream Cone 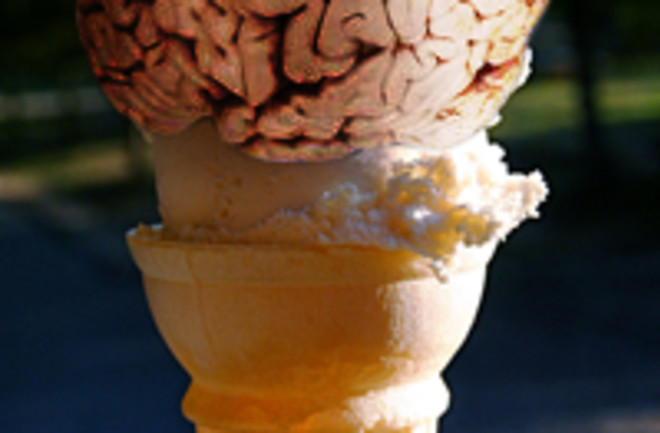 Human beings are the peak of evolution, right? Our advanced brains allow us to poke one another on Facebook, send rockets to the moon, and order complex drinks at Starbucks. We can even fall in love. How are we able to do all of that? NPR's Science Podcast has been doing a running series "The Human Edge" in which they discuss various things about humans that make us, well, human. NPR's John Hamilton tackled brain evolution and how we humans still carry parts of other ancestral animal brains within us. Feel that pebble in your shoe? Thank a jellyfish. Ever duck before a rogue Frisbee collides with your noggin? Thank a lizard. Remember where you left your keys? Thank a mouse. Hamilton interviewed David Linden from John Hopkins University who explained that our brain is the way it is because evolution is "the ultimate tinkerer and cheapskate." Evolution built our brain by taking simpler brains and just piling more brains on top - like adding scoops of ice cream to an ice cream cone. Hence, the pieces of our brain inherited from these other creatures are largely unchanged. The result is that our advanced, intricate, special gray-matter is spectacularly inefficient, poorly designed, and ill-suited to many of our daily needs. On the flipside, evolution's Frankensteinian cobbling together of various animal brains is precisely why human beings can experience higher emotions like love. Our ice-cream-cone-brain has created some of our best, and most uniquely human, attributes. After the jump is an illustrated guide of how the forces of natural selection shaped your mighty mind from distant relatives of jellyfish, lizards, and mice.The Cone: Nervous Jellyfish

Jellyfish were among the first animals to evolve anything resembling a nervous system, specifically a "nerve net." Our sensory nervous system, the part that lets you know if your hand is on a hot stove, sends signals the same slow way as the jellyfish nerve net does and at the same slow speed: 100 meters per second. For perspective, Hamilton notes that a landline telephone signal is "a million times faster." The speed of thought is none-too-impressive in the age of electronics. An example: if your foot was a mile away and someone shot you in that same foot, you would see the gun shot instantly, hear it four seconds later, then feel it twelve seconds after hearing it - a full sixteen seconds after the gun was actually fired. Nerves are sloooooow. Pro: Without the jellyfish neural net, our nervous system would never have evolved. You couldn't shake a hand, feel sun on your skin, or pull away from a cactus. Con: Your nerve cells would communicate more quickly if they yelled messages to one another. First Scoop: Instinctive Lizard

"Lizard brain" has become somewhat synonymous with our base instincts. Fight-or-flight reactions originate here, as do many of your unconscious reflexes, like ducking when you see something hurdling towards your head or automatically trying to catch something you drop. The downside is that fears of public speaking and panic attacks are related to your lizard brain misinterpreting a stressful situation as dangerous and overriding the rational, relaxed part of your mind. The "lizard brain" represents many core, instinctual actions. Pro: The lizard brain is as close to a Spider-Sense as a normal person is going to get. You react to danger unconsciously. Con: Because the lizard brain reacts to danger unconsciously, you don't get to pick when it decides to hijack your higher functions, send you into fight-or-flight and kick on the adrenal glands. Not convenient when giving a presentation at work. Second Scoop: Memory Mouse

The mammalian brain at is exemplified by that little workhorse of science labs everywhere: the mouse. Mice brains are able to remember and anticipate. Memory is what lets a mouse solve a maze it's seen before and the expectation of cheese is what encourages a mouse to figure out a new one. In short: a mouse brain can process time. It can remember the past and guess at the future in a rudimentary way. Every time you remember how to walk home from a new bar or think to buy toilet paper before running out, that's the mouse brain kicking in. And the anger you feel when you forget how to do either of those things? That's the mouse brain too - mammalian brains were the first complex enough to emote. Pro: We remember, anticipate, and emote because of the mighty mouse brain. Mammalian complexity - social nature, nurturing behavior, cross-species bonding - stems from these three essential additions. Con: In a word: Pavlov. The mouse brain allows rote conditioning. They don't call it the rat race for nothing. Third Scoop: The Thinking Ape Great apes, elephants, dolphins, some pinnipeds and maybe parrots can reason out solutions to problems and abstract situations. Why? The third and final brain scoop does three things. 1) It dramatically amplifies the mouse brain's anticipatory, memory, and emotional capabilities. 2) It adds the problem solving functions of reason, symbolic communication and abstract thought. 3) It makes powerful, complex connections within itself and the lower parts of the brain. Humans and intelligent animals are able to communicate, recognize themselves in mirrors, plan far in advance, grieve, and develop tight, complex communities all thanks to this final blob of neurons. Pros: Every aspect of higher thought is a result of the ape brain. Tool use, sympathy, group hunting, symbolic recognition, among many others. Cons: Complexity results in complications: emotional and mental disorders aren't something a lizard worries about. And we need an enormous energy budget. Our brain uses approximately 20% of our daily calories. Thinking is hard. According to Linden, the key separation between humans and apes isn't brain type but size - Humans just got a super-duper-sized third scoop. Start with a jellyfish cone, add scoops of lizard and mouse, then a gigantic ape scoop, throw on some sprinkles for culture, and you've got the human brain. Most astounding, however, is not our closeness to animals, nor that the good-enough-for-now parts evolution decided to preserve hinder us from becoming hyper-logical super beings, but that our most human behaviors come from all our brains working together. Linden asserts that love - a mental state that requires instinctual emotion, higher understanding, and logical reasoning while simultaneously transcending all three - would not be present in human beings if our brains were not so poorly engineered by evolution. So the next time you get that dreamy feeling when you look at your special someone, remember it's because your animalistic ice-cream-cone brain. Ice Cream Cone photo by

by me, Jellyfish by strollers, Lizard by SivamDesign, and Mouse by Olis Olois edited by me; all via Flickr