The Brain: What Is the Speed of Thought?

Faster than a bird and slower than sound. But that may be besides the point: Efficiency and timing seem to be more important anyway. 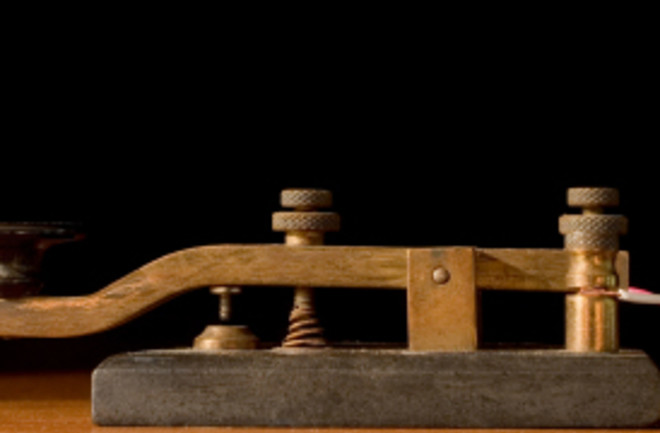 When Samuel Morse established the first commercial telegraph, in 1844, he dramatically changed our expectations about the pace of life. One of the first telegraph messages came from that year’s Democratic National Convention in Baltimore, where the delegates had picked Senator Silas Wright as their vice presidential nominee. The president of the convention telegraphed Wright in Washington, D.C., to see if he would accept. Wright immediately wired back: No. Incredulous that a message could fly almost instantly down a wire, the delegates adjourned and sent a flesh-and-blood committee by train to confirm Wright’s response—which was, of course, the same. From such beginnings came today’s high-speed, networked society.

Less famously but no less significantly, the telegraph also transformed the way we think about the pace of our inner life. Morse’s invention debuted just as researchers were starting to make sense of the nervous system, and telegraph wires were an inspiring model of how nerves might work. After all, nerves and telegraph wires were both long strands, and they both used electricity to transmit signals. Scientists knew that telegraph signals did not travel instantaneously; in one experiment, it took a set of dots and dashes a quarter of a second to travel 900 miles down a telegraph wire. Perhaps, the early brain investigators considered, it took time for nerves to send signals too. And perhaps we could even quantify that time.

The notion that the speed of thought could be measured, just like the density of a rock, was shocking. Yet that is exactly what scientists did. In 1850 German physiologist Hermann von Helmholtz attached wires to a frog’s leg muscle so that when the muscle contracted it broke a circuit. He found that it took a tenth of a second for a signal to travel down the nerve to the muscle. In another experiment he applied a mild shock to people’s skin and had them gesture as soon as they felt it. It took time for signals to travel down human nerves, too. In fact, Helmholtz discovered it took longer for people to respond to a shock in the toe than to one at the base of the spine because the path to the brain was longer.

Helmholtz’s results clashed with people’s gut instinct that they experienced the world as it happened, with no lag between sensation and awareness. “This is altogether a delusion,” German physiologist Emil Du Bois-Reymond declared in 1868. “It appears that ‘quick as thought’ is, after all, not so very quick.”

With their simple tools, Helmholtz and others could manage only crude measures of the speed of thought. Some of them came up with rates that were twice as fast as others. Researchers have been trying to get more precise results ever since. Today it is clear why they have had such a hard time. Our nerves operate at many different speeds, reflecting the biological challenges of wiring all the parts of the body together. In some ways evolution has fine-tuned our brains to run like a digital superhighway, but in other ways it has left us with a Pony Express.

In one common experiment for studying the speed of thought, researchers briefly show test subjects a lopsided, upside-down U and then ask them which leg of the figure is longer. It turns out that the subjects’ reaction times say a lot about their lives in general. People with faster responses tend to score higher on intelligence tests. Some psychologists have argued that a high processing speed in the brain is a vital ingredient for intelligence. Responses slow down when people suffer certain psychological disorders like depression. More puzzling, people with sluggish reaction times are more likely to die of incidents like strokes or heart attacks.

High speed is also crucial to the way we perceive the world. Three or four times a second, our eyes dart in a new direction, allowing us only about a tenth of a second to make sense of what we see in each spot. And we make remarkably good use of that time. Recently, neuroscientists Michelle Greene and Aude Oliva of MIT ran an experiment in which they briefly showed people a series of landscapes and then asked questions about the scenes. For example, was there a forest in the picture? Did it look like a hot place? People did well on these tests even when they glimpsed each of the pictures for less than one tenth of a second.

We are able to understand the world so quickly because of some clever speed boosters built into our eyes. Tim Gollisch of the Max Planck Institute of Neurobiology in Germany recently discovered evidence of one of these. He extracted retinal tissue from amphibians and exposed the living tissue to a series of simple geometric patterns. Then he recorded how the nerve cells fired in response. He noticed that each neuron started firing a little earlier or a little later, depending on which picture he showed. The shifts were distinctive enough that he could predict a shape just by looking at the timing of the neural reaction. Although this test involved amphibians, Gollisch proposes that the results would hold true for human brains as well. They might not wait for all the signals from the retina to arrive before they begin building a representation of the world. They might get a head start with the very first bits of information.

Using a fast code helps speed up thought, but to a large extent the brain—like a telegraph network—really depends on efficient pathways. Impulses from the retinas, for instance, have to travel up the optic nerve to the thalamus, which relays the signals to the visual cortex in the back of the brain. Then they ripple forward to other brain centers, where we use the visual information to make decisions and take actions. One way to hasten that journey is to use fast wiring. In 1854 physicist William Thomson showed that the wider a telegraph wire, the faster its signal and the farther the signal could travel. That same principle applies to nerves. The fattest axons, such as Betz cells in the brain, are 200 times thicker than the thinnest ones.

In principle, our thoughts could race far more efficiently if all the axons in our brains were thick. But the human brain has at least a quarter of a million miles of wiring—more than enough to reach from Earth to the moon—and is already packed tight. Sam Wang, a Princeton University neuroscientist, calculated how big our brain would be if it were built with thick axons. “Making an entire brain out of them would create heads so large that we couldn’t fit through doorways,” he concluded. Such a brain would also consume a tremendous amount of energy.

Given the constraints of biology and physics, our brains appear to have evolved to run very efficiently. For instance, neurons in the brain tend to be joined together into small networks, which are then linked to one another by relatively few long-range connections. This kind of network needs less wiring than other arrangements, and therefore shortens the distance signals need to travel.

Our brains also speed up through practice. Rene Marois, a neuro­scientist at Vanderbilt University, measured this effect by having people perform a basic multitasking test: They had to identify which of two possible faces appeared on a computer screen while responding to one of two possible sounds. In just two weeks of training (encompassing eight to twelve practice sessions), the test-takers were able to do both tasks in rapid succession almost as quickly as doing either one on its own. With practice, Marois speculates, the neurons in the brain’s bottleneck regions, primarily in the prefrontal cortex, require fewer signals and less time to produce the right response.

Sometimes our brains actually need to slow down, however. In the retina, the neurons near the center are much shorter than the ones at the edges, and yet somehow all of the signals manage to reach the next layer of neurons in the retina at the same time. One way the body may do this is by holding back certain nerve signals—for instance, by putting less myelin on the relevant axons. Another possible way to make nerve impulses travel more slowly involves growing longer axons, so that signals have a greater distance to travel.

In fact, reducing the speed of thought in just the right places is crucial to the fundamentals of consciousness. Our moment-to-moment awareness of our inner selves and the outer world depends on the thalamus, a region near the core of the brain, which sends out pacemaker-like signals to the brain’s outer layers. Even though some of the axons reaching out from the thalamus are short and some are long, their signals arrive throughout all parts of the brain at the same time—a good thing, since otherwise we would not be able to think straight.

So when Helmholtz recognized that thought moves at a finite rate, faster than a bird but slower than sound, he missed a fundamental difference between the brain and a telegraph. In our heads, speed is not always the most important thing. Sometimes what really matters is timing.