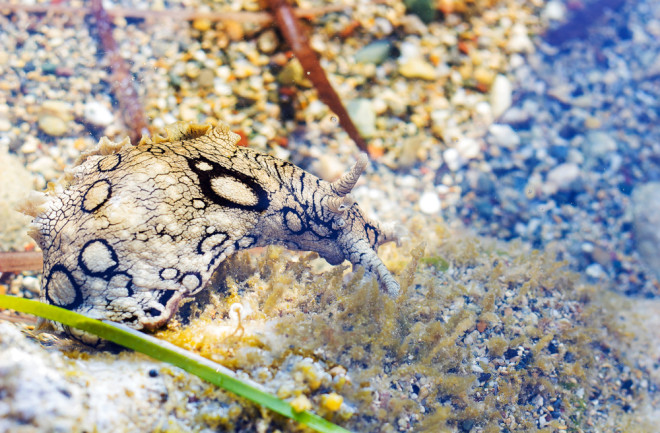 A sea slug. (Credit: Zuzha/Shutterstock) Sea slugs aren’t the most exciting critters, but they’re certainly helping researchers make exciting new discoveries. Biologists from the University of California Los Angeles published a study in the journal eNeuro explaining how they “implanted” a memory from one slug into another. In the first chunk of their study, the team, led by David Glanzman, worked with groups of a marine slug called Aplysia. One group of slugs got shocked on the tail once every 20 minutes for a total of five shocks. The next day, they went through the same shock session. The point was to prime them to use what’s called a defensive withdraw reflex — basically, the slug version of a flinch.

When Glanzman and his team later physically tapped these slugs on their tails, the creatures contracted for an average of 50 seconds. But when the team tapped another, shock-free group, those slugs only shied away for about one second. Here’s where things get interesting. The researchers then extracted ribonucleic acid (RNA) — the cellular messenger that carries out the genetic instructions of DNA — from the nervous systems of both the shock and non-shock groups. They took this RNA and injected it into a third set of slugs that hadn’t had to deal with any shocks or taps. Seven of these slugs got the shock group’s RNA, seven got the non-shock-group’s RNA. Next, the team tapped these RNA-injected slugs on their tails. Those that had received the shock group’s RNA responded almost exactly like the shock group: They recoiled for about 40 seconds. “It was as though we transferred the memory,” Glanzman said in a press release. So what’s the big deal? In the past, other groups have toyed with creating false memories, similar to what’s going on here. But many of these setups have involved using proteins to flag specific neurons, usually in mice. Then later, the researchers reactivated those tagged neurons in order to fiddle with whatever memory the cells were involved in. Unlike these setups, which tend to look at how the neuron networks themselves are involved in memory, Glanzman’s group is using RNA to tinker with memory. It's emblematic of his perspective on how memory works. Most neuroscientists would agree that memory, particularly long-term memory, is something that lives in the synapse — the gap between neurons. But this study, combined with Glanzman’s previous work, suggests the nucleus, where RNA carries out its DNA transcribing, could be the key to decoding how memories are stored.