An experiment reveals just how malleable memory can be. 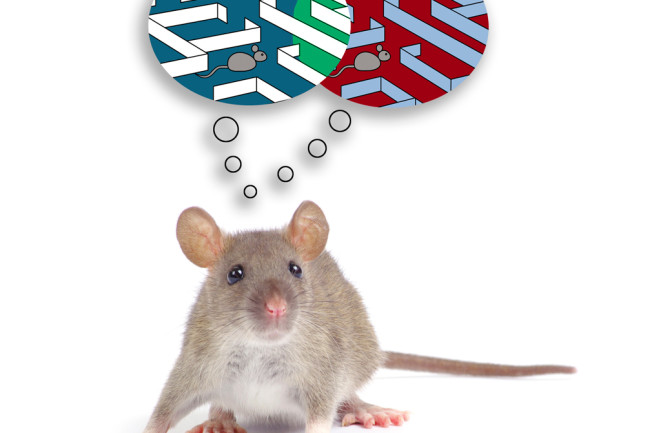 To explore how the brain encodes memories, neurobiologists at the Scripps Research Institute created a new memory in a mouse, by mixing two separate experiences of its past. The experiment reveals just how malleable memory can be.

The team, led by Mark Mayford, created a mouse with a specific gene that produces the protein hM3Dq when nerve cells with this gene become active, leaving the protein attached to the cell. Mayford could then selectively reactivate those cells whenever he wanted, simply by giving the mouse a drug known as clozapine-N-oxide (CNO), which interacts with hM3Dq.

He used this setup to interfere with a mouse’s memory of two distinct places and create an artificial blended memory that combined both places. In his experiment, he put the mouse into a box with a memorable odor and color: For example, let’s say it smelled like lemon and had a striped floor. While the mouse sniffed around, forming its memory of the box, the cells in its brain that specialized in remembering places became active, producing the hM3Dq protein.

The next day, the same mouse was put in a distinctly different box—one with the scent of wintergreen and a grid floor, for example. Mayford also gave it CNO to activate the memory cells from the previous day, of the lemon-scented, striped-floor room. At the same time, the animal also got a shock to its feet, so that it would associate the surroundings with something bad.

Next, Mayford’s team tested the animal’s response in a variety of situations, to see which environment the animal remembered as scary. Neither the lemon-stripe box nor the wintergreen-grid box made it afraid. But when the team put the mouse in the wintergreen-grid box and simultaneously gave it CNO to reawaken the lemon-stripe room memory, it froze in fear. Its behavior suggested it was remembering getting shocked in a blend of the two boxes—a synthetic, hybrid memory.

This sounds like something only a mad scientist could dream up, but it may turn out to be how we naturally make new memories, says Mayford. Old memories become active while we process new information. “You don’t learn something new without incorporating it into old information,” he says. With this new technique, Mayford will explore the basic code of memory, investigating how many neurons are required to store a memory and how cells change as memories are formed.

More From Discover
Planet Earth
Our Dogs Do Manipulate Us, According to Science
Mind
Lies, Deception and the Criminal Justice System
Mind
Humans Evolved To Be Lonely
Mind
Why Are People More Attractive the Longer You Know Them?
Mind
The Emotional Psychology Behind Investing
Mind
What to Know About Pandemic-Driven PTSD
Recommendations From Our Store
My Science ShopDiscover STEM Kits
My Science ShopDiscover 2022 Calendar
My Science ShopStrange Science
My Science ShopElements Flashcards
Shop Now
Stay Curious
Join
Our List