Commonly driven by financial stress, many people will readily adopt even the wildest conspiracy theories. Disavowing them, on the other hand, often requires the help of social psychologists. 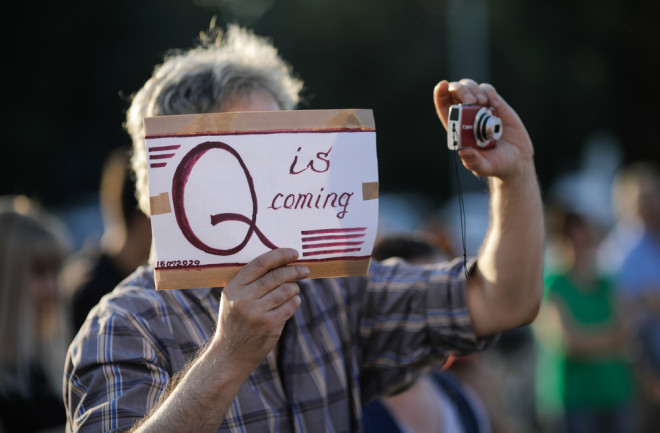 “I pray you will not be a journalist for the deep state,” Albert Samaha’s mother told him when he began working as a reporter for BuzzFeed News. As her son was publishing research on COVID-19 outbreaks and Donald Trump’s attempt to challenge the outcome of the 2020 presidential election, the mother took to Twitter to suggest that George Floyd was — contrary to what the government supposedly wanted her to think — alive and in hiding.

Samaha spent years trying to pull his mother out of the so-called rabbit hole of conspiracy theories, he wrote in a March BuzzFeed article, but has yet to succeed. He has tried presenting counterevidence to her propositions and pointing out contradictions in her worldview using simple logic. Unfortunately, each unsuccessful attempt only seemed to solidify the belief that her son had become a spokesperson for the “liberal media” ordered to “silence Patriots” like herself.

Samaha’s story isn’t unique: A 2021 poll from the Public Religion Research Institute estimated that as many as 15 percent of Americans follow QAnon, which claims that Donald Trump was elected to bring down a cabal of Democratic figureheads from drinking the blood of unborn children. Support for this particular theory solidified during the pandemic, when social media posts on the subject increased by 175 percent and 63.7 percent on Facebook and Twitter, respectively.

Narratives like QAnon have played a role in public life for decades, and during that time disciples have mostly received scorn or ridicule from cynics. It wasn’t until QAnon was declared a domestic terrorism threat by the FBI following the Jan. 6 U.S. Capitol attack that experts seriously considered preventing the spread of conspiracy theories. But how do you stop something capable of ripping apart families and halting lifelong friendships?

“[Conspiracy theories] aren’t about what’s true or false — let alone right or wrong — but about what kind of psychological need a certain piece of information could satisfy,” says Anni Sternisko, a doctoral candidate in psychology studying conspiracy theories through the lens of social psychology at New York University. People from various backgrounds hold conspiracy theories, she continues, and dismissing them as uneducated or malicious won’t help anyone.

Given the highly political nature of some conspiracy theories, it’s difficult to study them in an objective, scientific setting. In her research, Sternisko has chosen to focus on people who believe in narratives with little to no factual evidence. Analyzing how conspiracies spread remains tricky because social media platforms like Facebook and YouTube tend to conceal their recommendation algorithms. Analyzing hashtags on Twitter, Sternisko did find that disinformation tends to spread faster than accurate information.

Revealing why people believe in conspiracy theories is far easier thanks to an abundance of psychological literature on the subject. “People are very good at selecting and interpreting information that seems to confirm what they already believe, and rejecting or misinterpreting whatever goes against those beliefs,” says Kate Douglas, a social psychologist at the University of Kent and author of The Psychology of Conspiracy Theories.

Sternisko takes particular interest in the relationship between conspiracy theories and identity. “We know from social psychology that part of our identity is tied to a group, that we want our group to look good and the other to look bad,” she says. Sternisko sees the conspiracies surrounding the presidential election as a prime example: “More Republicans than Democrats believe the election was rigged, partly because Republicans are grappling with the idea that their party lost and that they are not as likeable as they would want to be.”

Conspiracy theories’ growing presence in the United States — not to mention the influence they exert over the country’s political institutions — have led many policymakers, reporters and psychologists to speculate on how their spread might be controlled. Security studies professor Melissa Graves has suggested looking at programs that were implemented in Europe and the Middle East to deradicalize incarcerated jihadists during the War on Terror.

While this may seem like an extreme example, Graves notes that such programs have set an important precedent by incorporating cognitive development, community reintegration, ideological reform and mental health counseling. The goal is to get participants to think critically about their beliefs, give them a sense of belonging, and address untreated psychological struggles that may have driven them towards extremism in the first place.

Deradicalization programs vary from one country to another, but many of them share an emphasis on cross-cultural dialogue. “Reestablishing positive and trust-based social relationships among communities across ideological divides to experience the failure of black-and-white, us-versus-them extremist ideologies is of the utmost importance,” says Daniel Koehler, the founding director of the German Institute on Radicalization and De-Radicalization Studies, in a March Lawfare article.

Recent studies back up Koehler’s proposition. Earlier this year, researchers at the Institute for Quantitative Social Science at Harvard University found that living with Black neighbors predicts Democratic partisanship for white Americans for up to 70 years later. When evaluating corporate inclusivity initiatives, Neil Lewis, Jr., a behavioral scientist at Cornell University, suggested that cross-cultural dialogue was more effective than conventional anti-bias training.

Do These Strategies Work?

While deradicalization programs have existed for over three decades, a variety of factors make it hard to determine their effectiveness. First, a relatively low number of former extremists participate — too few to gain a quantitative understanding of the process. Additionally, most evaluations only look at the short-term effects of deradicalization rather than long-term ones. That’s partly because longitudinal studies are costly and harder to organize.

Ryan Brown, a behavioral scientist who researches disinformation for the RAND Corporation, thinks that small programs could be more effective than wider-reaching ones. “Whether you’re dealing with conspiracy theorists or violent extremists, both see outside attempts to deradicalize them as further evidence that their beliefs are correct,” he explains. For that reason, extensive involvement from the government, military or police could do more harm than good.

“We found that almost two-thirds of our participants had experienced unsuccessful intervention attempts in the past,” Brown continues, “usually under guidance of the aforementioned authorities.” Heeding Brown’s advice, Parents for Peace — a grassroots nonprofit focused on working with extremists across the political spectrum — refuses to accept government funding because it may risk the trust of their participants.

Overall, deradicalization appears to be a promising yet underdeveloped research field. Although quantifying their outcomes remains challenging, programs continue to evolve and improve, in part by studying the relationship between radicalization and financial stability. “It is key to understand that deradicalization does not work through a one-size-fits-all approach,” Koehler surmises. “Multidisciplinary teams that hand-tailor the intervention for each participant are the most effective, including social work, educational initiatives, creative arts and sports.”

More From Discover
Technology
How Hackers Take Down Websites
Lifestyle
8 of the Best Black Friday Electronic Deals
The Sciences
Serial Killers Have Rapidly Declined Since The 1980s
Technology
The Pros and Cons of Artificial Intelligence
Technology
Some Researchers Debate if we are Living in a Computer Simulation
Mind
Mental Health Problems Increase In Millennials and Gen Z, New Study Reports
Recommendations From Our Store
My Science ShopDiscover STEM Kits
My Science ShopDiscover 2022 Calendar
My Science ShopStrange Science
My Science ShopElements Flashcards
Shop Now
Stay Curious
Join
Our List