Why Multitasking Does More Harm Than Good 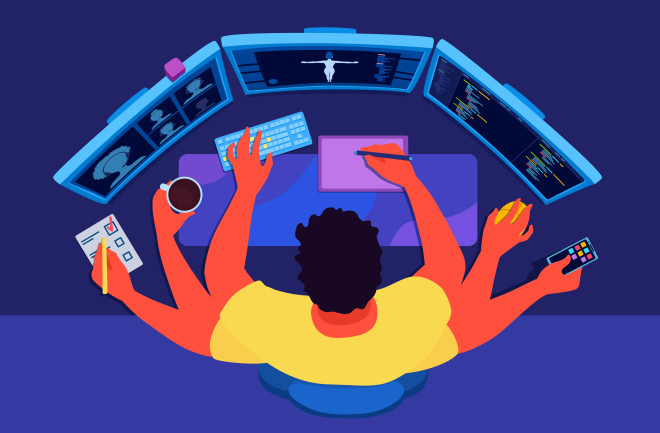 If you’ve ever opened another tab and made the grocery order during a Zoom meeting, folded laundry while helping your kids with their homework, or listened to a podcast while working out, you’ve been guilty of multitasking. Why guilty? Isn’t this just being super efficient? Not really. A growing body of research has found that it’s far less efficient to try to do two (or more!) things at once than to focus on just one task at a time. Multitasking can interfere with working memory, cause students to do worse in school, and could possibly even create potentially long-term memory problems.

Your Brain While Multitasking

When we take on a task, several brain networks dealing with attention and cognitive control are involved. These are the frontoparietal control network, the dorsal attention network, and the ventral attention network. Attempts to multitask can create interference among these networks, and this can lead to slower processing as well as mistakes, explains Kevin Paul Madore, a neuroscientist at Stanford University. “One way we can examine the effects of multitasking on behavior and the demands it places on relevant brain networks is by analyzing ‘task switch costs,'" he says.

A switch cost is a loss of accuracy or speed that comes when you shift between tasks. Though some of the costs of multitasking are subtle, they are by no means trivial. Too much multitasking can interfere with both working memory and long-term memory. Research by Madore and colleagues found that heavier media multitasking is associated with attention lapses and forgetfulness. However, it’s still not clear what’s causing what. “Some research has indicated that chronic everyday media multitasking is related to errors in our ability to hold and use information in mind (working memory) and our ability to retrieve information (long-term memory),” says Madore, but he adds that more research is needed to determine the direction of causality.

It might seem that some types of multitasking are easier to pull off than others. Sure, texting while driving is a no-go, but surely folding the laundry while helping the kids with their homework is easy enough. But no, that doesn’t work either. You’re not risking life and limb — yours or anyone else’s — when you combine laundry and school work, but you’re still not going to be able to do your best at either task when trying to do both at once. “When you have competing sources of attention, your task performance is often going to be reduced,” says Madore. “You’re probably slower at folding laundry or maybe you drop some things on the floor when you’re helping a child with homework versus folding laundry alone.”

Dropping a few socks is not a big deal, and certainly worth the cost of having some time with your kids (though being with your kids while not giving them your full attention might have its own costs). On the other hand, some of the consequences of trying to do two things at once, even if those things seem simple, can be horrific — having a car accident, for example. Even eating a sandwich or fiddling with the CD player while driving can increase your risk of an accident.

There’s at least one situation, though, where multitasking can be your friend. Some studies have shown that taking a walk while trying to sort out a thorny problem improves creativity and can help you come up with better solutions. So perhaps when we’re trying to figure out how to get through that seemingly endless to-do list, we should forget about trying to do two or three of those things at once and go out for a walk. That might just lead to a creative solution to the time crunch problem.

More From Discover
Mind
Why Are We Addicted to Love?
Mind
Research on Psychedelics and How Mushrooms Can Help Combat Depression
Health
10 Science-Backed Ways to Boost Your Brain
Health
Extreme Fatigue: 4 of the Longest-Lasting Sporting Events
Mind
Weed Might Not Make You Creative After All
Mind
How Does Alzheimer's Disease Lead to Death?
Recommendations From Our Store
My Science ShopDiscover STEM Kits
My Science ShopDiscover 2022 Calendar
My Science ShopStrange Science
My Science ShopElements Flashcards
Shop Now
Stay Curious
Join
Our List